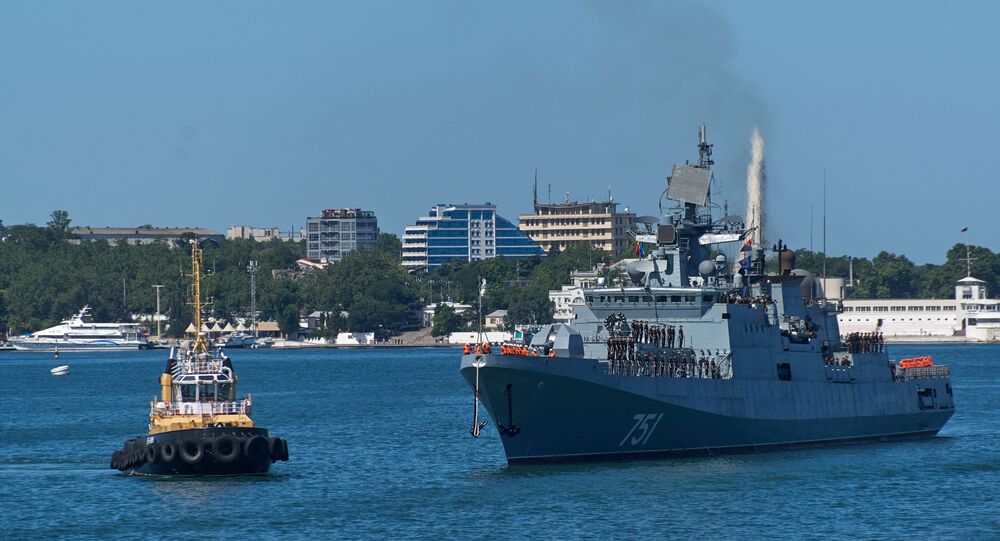 The Russian Navy’s newest guided-missile frigate Admiral Essen has left the city of Sevastopol, the home of Russia's Black Sea Fleet, and embarked on its mission to Syrian waters where it will join the group of Russian warships, a source in Crimean law enforcement agencies told Sputnik.

The crew of the frigate will practice joint operations as part of Russia's group of warships, the source said.

"The crew will undergo numerous trainings on rebuffing air attacks, attacks from shores and from water. The crew is on constant combat alert as well as frigate's weapons and technical means," the source told Sputnik.

Earlier reports revealed that Russia's newest Project 11356 guided-missile frigate Admiral Essen has joined Russia's Black Sea Fleet. It completed a passage around Europe and launched cruise missiles from the eastern Mediterranean Sea on the positions of Daesh terrorists in Syria.

After its arrival in Sevastopol, the crew was given a short after-mission vacation.

© REUTERS / Yoruk Isik
Demand for Russian Warships Skyrockets Amid Syria Campaign
It is equipped with the 100mm A 190 shipboard automatic artillery gun, an anti-aircraft battery, an antisubmarine rocket launcher and torpedoes.

The frigates are designed for anti-ship and anti-submarine warfare in the high seas, and anti-aircraft actions both independently and as an escort ship. Measuring 124.8 meters in length, the frigates displace 3,620 tonnes.

The frigates embark one Ka-28 or Ka-31 helicopter in the hangar and feature the Russian-built Fregat-MAE-4k General detection and target designation radar designed for the detection of air and surface targets and outputting the target designation data directly to the firing units.