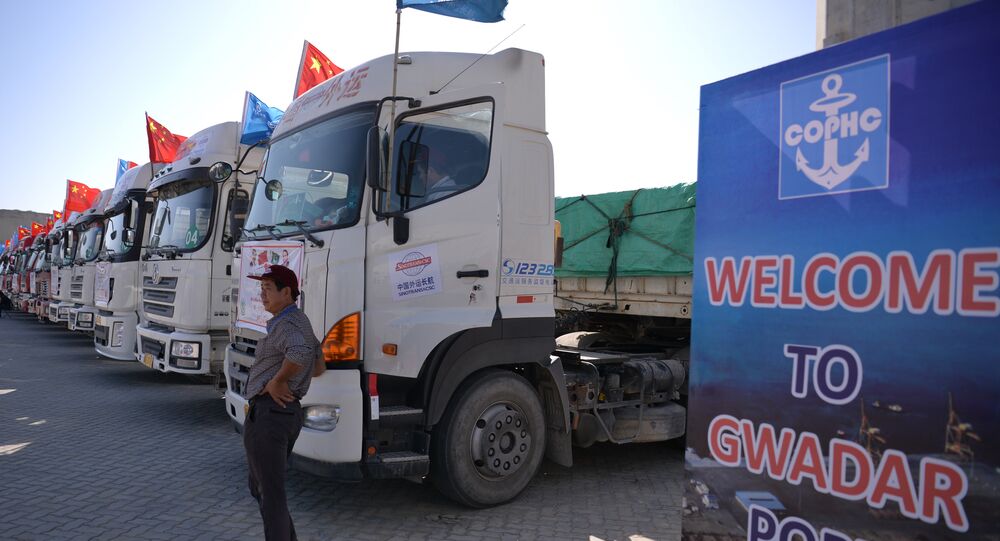 Freight Train From China to Pakistan Could Worsen Indo-China Ties

A road and rail freight service between China's Lanzhou and Pakistan's Gwadar Port might become another flashpoint between India and China, as ties worsen between the two countries.

New Delhi (Sputnik) — Part of China's multi-billion dollar Belt and Road Initiative, the China-Pakistan Economic Corridor (CPEC) is one of the strands of the mega-infrastructure project that aims to criss-cross Eurasia with a web of rail, road and maritime networks.

The new line will start from Lanzhou, capital of northwestern China's Gansu Province, and travel through Kashgar in the Xinjiang Uygur Autonomous Region to the Gwadar Port of Pakistan, Xinhua quoted Xu Chunhua, director of Lanzhou International Trade and Logistic Park, as saying.

While it is not clear when the service will be launched, a rail and road cargo service opened between Lanzhou and Kathmandu last May.

China launched its first trade convoy in Pakistan last November carrying goods for export through the western route of the $50 billion CPEC and shipped it through Gwadar Port. The goods were brought by train to Xinjiang and then taken by trucks through the Karakoram Mountains on Pakistan's side of Kashmir.

India has objected to the $57 billion CPEC on the grounds of sovereignty and questioned the project's role in promoting sustainable development.

"We are of firm belief that connectivity initiatives must be based on universally recognized international norms, good governance, rule of law, openness, transparency and equality. Connectivity initiatives must follow principles of financial responsibility to avoid projects that would create unsustainable debt burden for communities; balanced ecological and environmental protection and preservation standards; transparent assessment of project costs; and skill and technology transfer to help long term running and maintenance of the assets created by local communities. Connectivity projects must be pursued in a manner that respects sovereignty and territorial integrity," India's Ministry of External Affairs said in a response to the project in mid-May.

"The so-called ‘China-Pakistan Economic Corridor,' which is being projected as the flagship project of the BRI/OBOR [One Belt, One Road], the international community is well aware of India's position. No country can accept a project that ignores its core concerns on sovereignty and territorial integrity," the statement added.