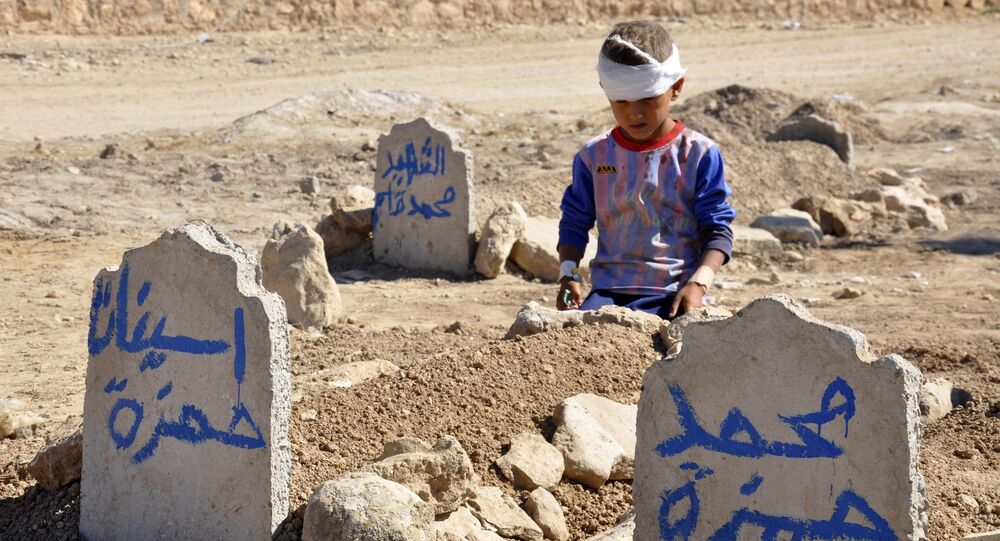 The terrorist group Daesh (ISIL/ISIS) has perpetrated another horrible atrocity in Iraq, murdering scores of innocent Turkmen civilians who tried to escape the Islamists’ grasp.

© REUTERS / Stringer
Humanitarian Situation in Iraq Raises Serious Concerns - Moscow
In yet another trademark display of brutality and violence, Daesh terrorists executed scores of men, women and children who sought to flee the area controlled by the extremist group.

Aydin Maruf, a representative of the Turkmen Front in Erbil and member of the Iraqi Kurdistan Parliament, told Sputnik Turkiye that Daesh terrorists had executed over 200 Turkmen civilians who were attempting to flee the city of Tal Afar.

"Over 200 Turkmen trying to flee Daesh were murdered in Tal Afar. Those people were seized by terrorists about 10 days ago as they were attempting to escape Tal Afar. They were held at a Daesh prison, and yesterday they were all murdered. There were women, children and elderly people among the victims," Maruf said.

He pointed out that this is far from the first such atrocity committed by Daesh forces, who murdered over 3,000 civilians since seizing control of that particular region.

"About 500 Turkmen who were part of the Iraqi army died during the fighting in Mosul. Some 400,000 Turkmen had to flee Mosul. The entire Turkmen population of Iraq is currently in danger. We implore the government of Iraq, the local administration and the global community to not remain impartial in the face of this mass murder of Iraqi Turkmen, and to push for the liberation of the region from terrorists," Maruf added.

It should be noted that according to the data collected by the International Organization for Migration, over one million people were forced to leave their homes in Mosul due to the fighting between Daesh terrorists entrenched there and Iraqi forces attempting to liberate the city.

Less Than Kilometer Needs to Be Liberated in Iraq's Mosul - Pentagon