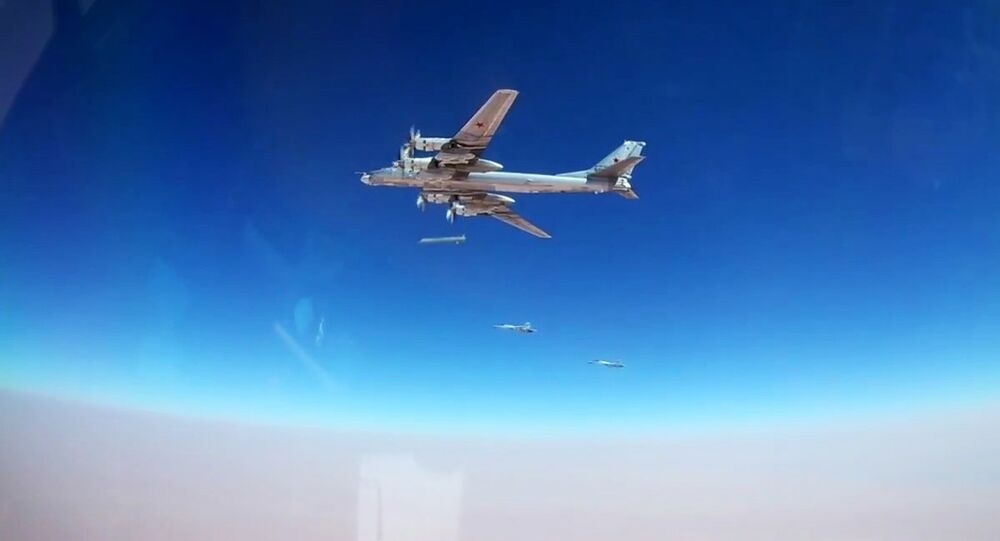 Commenting on the recent Russian Aerospace Forces strike on Daesh militants in Syria with brand-new Kh-101 cruise missiles, military expert Vladimir Kozin explained to Sputnik Radio why the decision to use this military hardware was both right and justified.

On Wednesday, the Russian Defense Ministry reported that Russia's Tu-95MS long-range bombers had struck Daesh targets in Syria with brand-new Kh-101 cruise missiles, destroying three large terrorist arms and ammunition depots, as well as a terrorist command center near the city of Uqayribat on the border between Hama and Homs provinces.

The strikes were made from a range of about 1,000 kilometers and marked the sixth time that Russia has used the Kh-101 in combat, the Ministry said.

The Tu-95 strategic bombers took off from an airfield in Russia.

"Russian Su-30 fighters based at the Hmeymim airfield [in Syria's Latakia province] provided air cover. After successfully accomplishing the task of the combat mission, all Russian aircraft returned to their airfields," the Ministry said.

The Kh-101 (in Russian: X-101) is a strategic, air-launched Russian cruise missile, manufactured using modern technology to reduce radar visibility. It can destroy a target up to 4,500 kilometers away. This type of missile can be equipped with a nuclear warhead. The Kh-101 uses GLONASS, the Russian satellite navigation system, for trajectory correction and is reported to have an accuracy of five to six meters.

Up to 12 Kh-101s can be loaded onto a Tupolev Tu-160 (NATO reporting name: Blackjack), while the Tupolev Tu-95 (Bear) is capable of carrying a maximum of eight of these missiles.

Vladimir Kozin, a military expert and professor at the Russian Academy of Military Sciences, explained to Sputnik Radio why the decision to use this military hardware was both right and justified.

"It is very important that all the targets have been hit and all the aircraft returned to their home airfields after successfully completing their task. Daesh (the Islamic State), which is banned not only in Russia, but in a number of other states, has suffered very serious damage. It was the right decision: even though more and more groups in Syria prefer giving up their arms and ceasing fire, there are still a number of rampant groups, such as the Islamic State, which continue to wage war against Syria's legitimate authorities,"  Vladimir Kozin told Sputnik.

© Sputnik / Vitaliy Belousov
'Two Tasks' Russia Accomplished by Striking Daesh With New Kh-101 Cruise Missiles (VIDEO)
He noted that it was not the first use of Kh-101 cruise missiles during Russia's operation in Syria, and it was justified.

"Russian Aerospace Forces used Kh-101 cruise missiles for the first time in November 2015. This type of missile is manufactured using modern technology to reduce radar visibility; it means that radio detection and ranging equipment, such as radars, practically don't 'see' it," the expert explained.

He further added that terrorists hardly have in their possession such stations and couldn't maintain them even if their sponsors provided them. However other states, which back these terrorists, could use radar to detect Russia's high-precision missiles.

Previously, the Russian aviation launched Kh-101 missile strikes on Daesh targets in February 2017, destroying several terrorist camps, training centers and the command post of one of the major terrorist units near Raqqa.