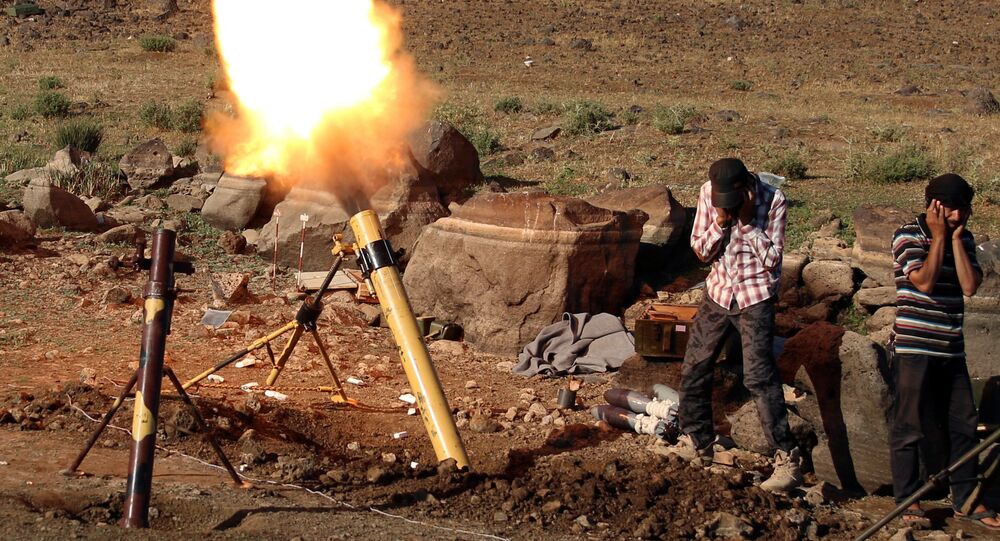 Commenting on the recent claims of the White House that the US allegedly "observed potential preparations for another chemical weapons attack by the Assad regime" and a subsequent CNN report on the deployment of the US warships targeting Syria's Shayrat airbase, Syrian politician Ammar al-Asad explained to Sputnik the real reason behind the claims.

© CC BY 2.0 / DVIDSHUB / USS George H.W. Bush action
Is the US Really Ready for 'Unprecedented Actions' in Syria?
On Monday, White House spokesperson Sean Spicer claimed that the United States allegedly "observed potential preparations for another chemical weapons attack by the Assad regime." And if President Assad went through with it, he should expect the US to retaliate.

"If, however, Mr. Assad conducts another mass murder attack using chemical weapons, he and his military will pay a heavy price," Spicer wrote in his statement.

Statements from @PressSec on #syria pic.twitter.com/gEqPAf6WBk

​Later on Wednesday, Defense Secretary James Mattis claimed that "he believes Syria has backed down."

"It appears that they took the warning seriously," Mattis told reporters during a trip to Brussels for a NATO meeting. "They didn't do it."

Nikki Haley, the US ambassador to the UN, also told Congress that "Trump's warning stopped the Assad regime."

Also on Wednesday, CNN reported that "the US military has ships and aircraft in place to strike Syria if ordered to do so by President Donald Trump, but so far it does not appear as if the Syrian government has made any further moves toward a chemical weapons attack."

© Ruptly .
US 'Inventing Pretexts to Test Russia's Reaction' in Syria
"For now, Syria's Shayrat airbase remains under constant overhead surveillance by the US for further signs of whether a chemical strike may be in the works," the broadcaster said.

It further reported on the aircraft carrier USS George H.W. Bush, along with two destroyers and two cruisers being deployed in the eastern Mediterranean Sea for routine patrol positions.

Commenting on the above reports, Syrian MP Ammar al-Asad, deputy head of the Foreign Affairs Committee of the Syrian parliament, the People's Council, told Sputnik Arabic that the new wave of claims about chemical weapons in Syria is needed to distract attention from the "landslide victories of the Syrian army in the Syrian Desert on the border with Iraq and its effective cooperation with the Iraqi People's Mobilization Forces (PMF), also known as the Popular Mobilization Units (PMU), (Al-Hashd Al-Sha'abi)."

© REUTERS / Ammar Abdullah
US 'Evidently Preparing New Intervention' in Syria - Moscow
The Syrian MP said that the Syrian and Iraqi forces are currently preparing a joint assault on the positions of Daesh militants at Deir ez-Zor city in eastern Syria. While the US, he said, has been supporting the militants and their ground operations since the very start of their war against Syria.

Ammar al-Asad recalled that the US has already claimed responsibility on President Assad for the chemical incident in Syria's Khan Sheikhoun in April. Damascus rejected the accusations and said militants and their allies were responsible.

This week Russian Foreign Minister Sergei Lavrov pointed out that almost three months later, Russia is still trying to push for an OPCW (Organization for the Prohibition of the Chemical Weapons) mission to be sent to Syria's Khan Sheikhoun.

"Until now, the US and its allies have not sent an independent international commission to Khan Sheikhoun for investigation of the incident. Back in April, the Syrian government together with Russia suggested sending the commission to Syria's Shayrat airbase, where the aircraft allegedly took off from to bomb Khan Sheikhoun, for investigation,"  Ammar al-Asad told Sputnik.

"The US is using all types of lies and falsifications in the Syrian crisis. At the same time, Israel is advancing in the south, and Damascus has already made sharp statements to Tel Aviv on it. Israel is now escalating the situation in the Golan Heights and Quneitra Governorate in order to seize these areas out of the Syrian control," he said.

On Friday, Israel Defense Forces tweeted that the Israeli aviation attacked Syrian troops for the fourth time in a week, allegedly in response to a stray projectile that fell on Israeli-controlled Golan Heights.

In response to the projectile launched towards Israel from Syria, IAF aircraft targeted the Syrian military position that fired the mortar.

​"Sometimes the US and Israel change roles. Tel Aviv is now supporting terrorists in Quneitra Governorate, However they are losing there as the Syrian army is returning control over strategic positions in these regions," Ammar al-Asad said.

The military who are fighting against Syria need this war. Because they are trading weapons and are bound with the arms corporations. And the US is acting in the interests of Israel, the Syrian MP concluded.