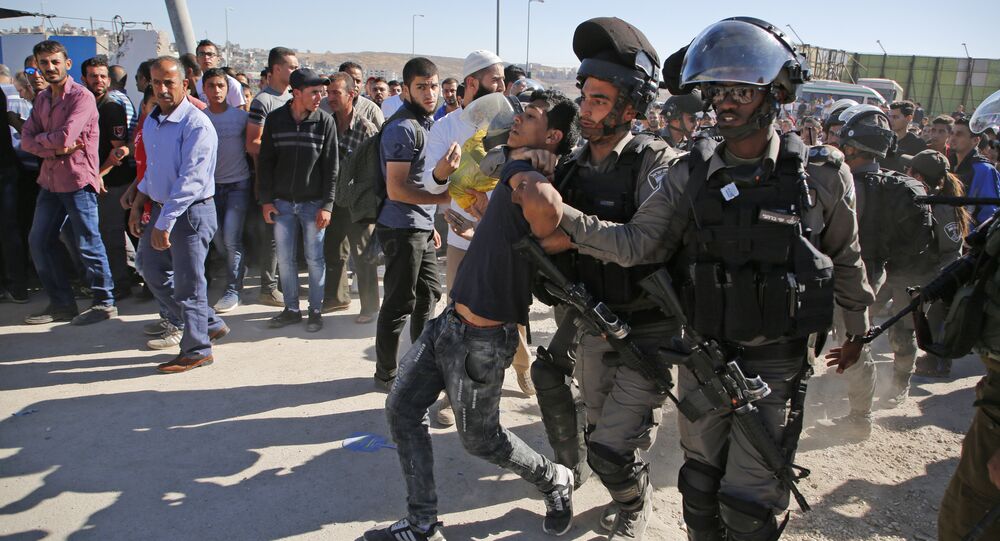 Shelling, blackouts, the disruption of supplies and a travel ban have made the lives of Palestinians extremely difficult. They claim their rights are being violated and that Israel is waging a quiet war against them, but this has been overshadowed by the Syrian crisis. Sputnik Arabic discussed their plight with politicians in Palestine and Israel.

© AP Photo / Tsafrir Abayov
Doomed to Death: Israel's Harder Travel Rules for Sick Gazans 'Equivalent to War' - Official
Faisal Abu Shahla, elected Palestinian Legislative Council (PLC) member for Fatah told Sputnik Arabic that Israel has a policy of responding to any fire directed towards it or which strikes its territory, whether by armed groups in the Hamas-run Gaza Strip or by the various elements now fighting in neighboring Syria or Egypt’s Sinai Peninsula.

"Israel claims without any proof that Daesh militants are using missiles against it and immediately responds with retaliatory fire. However we think that Israel was one of creators of this criminal organization," he told Sputnik.

The Palestinian politician also said that Israel has been killing Palestinians "with or without any reason." They don't take into account any principles of humanity and have no respect towards any religious holidays. During the holy month of Ramadan they have even blocked the square near al Aqsa Mosque in Jerusalem, he said.

"After the coup instigated by Islamic Resistance Movement of Hamas and its takeover of Gaza Strip, the Palestinian Legislative Council (PLC), the Palestinian parliament, has been suspended from work. We however continue regarding ourselves as members of the parliament and demand ending up the split of the Palestinian Authority and returning order," the politician told Sputnik.

© AP Photo / Lefteris Pitarakis
Israel Reduces Electricity Supplies to Gaza Amid Palestine's Refusal to Pay
Faisal Abu Shahla said that they want the Palestinian Unity Government to return to its work in Gaza Strip and support people who found themselves in extremely hard conditions there, providing them with all the things they need. They want to get back to democratic order when Palestinians voice their positions through ballot boxes and not through ammunition boxes.

It is worth reminding that the conflict between Palestinian Fatah and Hamas movements began to rise in 2005 after the death of Yasser Arafat, the first President of the Palestinian National Authority and the founding member of Fatah political party. It intensified after Hamas' legislative victory in 2006 and its subsequent takeover of Gaza Strip in 2007.

After the 2006 elections which Hamas won, Fatah developed a plan to replace the Hamas-government. According to the plan, a national unity government or a "government of technocrats" would be formed and prepare early presidential and legislative elections.

The Palestinian National Unity Government was formed on March 17, 2007 following negotiations in Mecca, but due to failing international support, it was short-living.

© REUTERS / Thaer Ghanaim/PPO
Kushner Visits Israel, Palestine to 'Lay the Groundwork' For Two-State Talks
On June 14, 2007, after Fatah – Hamas battle, it was dissolved by President of the Palestinian National Authority Mahmoud Abbas, who declared the state of emergency in the Palestinian National Authority an appointed an emergency government. Meanwhile, Hamas took control of the Gaza Strip during the Battle of Gaza.

Numerous subsequent attempts to reconcile and form another Palestinian Unity Government turned no success. The remaining Palestinian split substantially complicates any peace talks on the settlement of the decades-long bloody Israeli-Palestinian conflict.

© AFP 2021 / Jaafar Ashtiyeh
To Setup Peace Between Israel and Palestine, Russia 'Needs Leverage on Both'
Hamas is regarded, either in whole or in part, as a terrorist organization by several countries and international organizations, most notably by Israel, the United States and the European Union.

Masud Ganaim, an Arab deputy of the Israeli Knesset (the country's parliament) told Sputnik that Israel regards Gaza Strip as a hot spot and it is in Israel's interests to maintain tensions there.

"The latest shelling of this territory demonstrates that Tel Aviv does not care about any holidays or any economic or social situation there, it wants full control over the territory. Besides, the residents have been reminded that any aggression against Israel by Hamas will be punished," he said.

"According to statistics, we now could expect yet another Israeli war against Palestinians in Gaza, as every year or two Tel Aviv launches a war and nobody knows when and under which pretext it happens. Now there are all the preconditions in place: the split in Palestine has intensified, there is an Israeli blockade in place. The Arab society is too weak to stand against the Israeli aggression. And what is the most important, is the desire of Benjamin Netanyahu, the Prime Minister of Israel, to settle the issue with Israeli hostages kept by Hamas," Masud Ganaim said.

© Sputnik / Alexei Druzhinin
Palestine Welcomes US-Russia Coordination on Organizing Direct Talks With Israel
He further elaborated that certain forces in Israel demand taking all the necessary measures to forcefully return the hostages and the remains of Israeli soldiers. It might well become a reason for waging a war against Hamas, he said.

The parliamentarian suggested that in case of a possible war, it will differ from all the previous conflicts.

"They say in Israel that this time they will do away with Gaza Strip. I don't think that they are planning to occupy it, but they might be planning an extremely cruel war," he finally said.