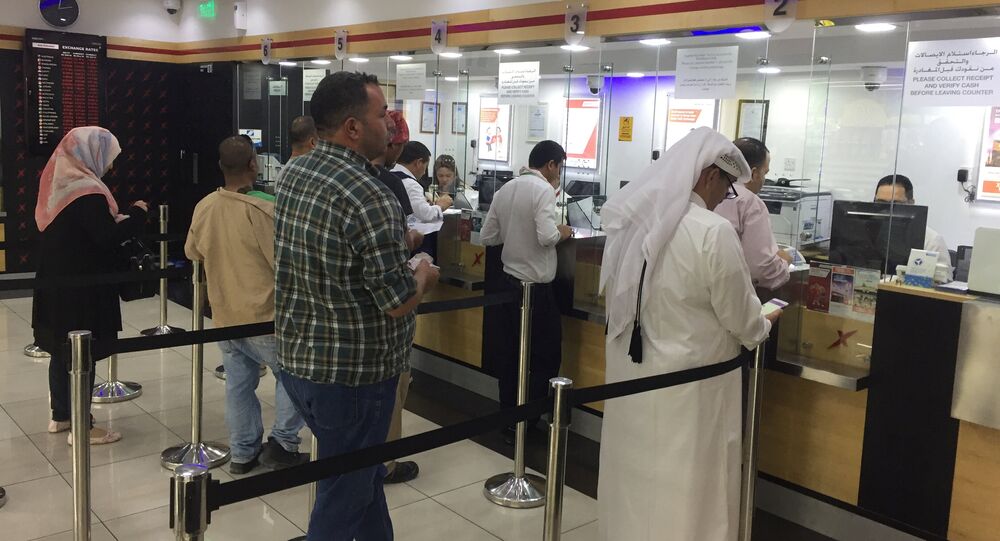 Residents of Qatar are having problems exchanging their riyals after exchange services worldwide stopped accepting them, following the economic blockade announced by Saudi Arabia and its Arab allies.

© AP Photo / Hasan Jamali
Spitting Mad: Saudi Arabia Deports 15,000 Qatar Camels
The Qatari riyal has fallen to its lowest trading value against the dollar in 12 years as a result of the boycott of Qatar by a group of Arab countries.

On June 5, Saudi Arabia, the UAE, Bahrain, Egypt, Yemen and Libya cut diplomatic ties with Qatar, alleging that the Gulf nation supports terrorists and militant groups with ties to Iran.

While the Qatari riyal has been officially pegged at $3.64 to the dollar since 2005, offers for the currency have fallen below the fixed rate amid a fall in demand. According to Bloomberg data, the spot exchange rate for the riyal dipped to 3.79 on June 26, before recovering to 3.72 on Friday.

© REUTERS / Naseem Zeitoon
A man walks on the corniche in Doha, Qatar, June 15, 2017
Financial traders said the two percent decrease in the riyal's spot exchange rate, despite the peg, is a result of low liquidity resuling from the sanctions, which have disrupted financial operations. The sanctions have led many banks in Saudi Arabia, the UAE and Bahrain to stop trading with Qatari institutions, while international banks have cut back on trading with Qatar because of political risk.

Most exchange houses in the Gulf have also stopped accepting Qatari riyals, and foreign exchanges in many countries have followed suit, citing a lack of demand for the currency.

"I'm in (Los Angeles) and I tried to exchange Qatari riyals at multiple banks (US Bank, Bank of America, Chase etc.) and they've informed me that a directive was sent out to all US banks not to accept Qatari Riyals at all," one Qatar resident told Doha News.

Yes!!! I'm in Pakistan and the money exchangers are giving me trouble. Will be back in Doha soon and will transfer home from there.

​In the UK, Halifax Bank of Scotland (HBOS) confirmed that they were not buying riyals from customers "as there was no market for selling them."

​​According to Arab News, the Post Office, one of the UK's main currency exchanges, "temporarily" stopped trading in riyals on June 5 because banks refused to trade in the currency.

"Banks we utilize to dispose of excess Gulf currencies informed us at the outset that they were no longer buying (Qatari riyals)," a Post Office spokeswoman told the news outlet.

© REUTERS / Stringer
Russia Ready to Supply Food, Freshwater to Qatar If Needed - Official
Last week, Saudi Arabia, Bahrain, the United Arab Emirates and Egypt presented Qatar with a 13-point list of demands that it must fulfil in order to have the blockade lifted.