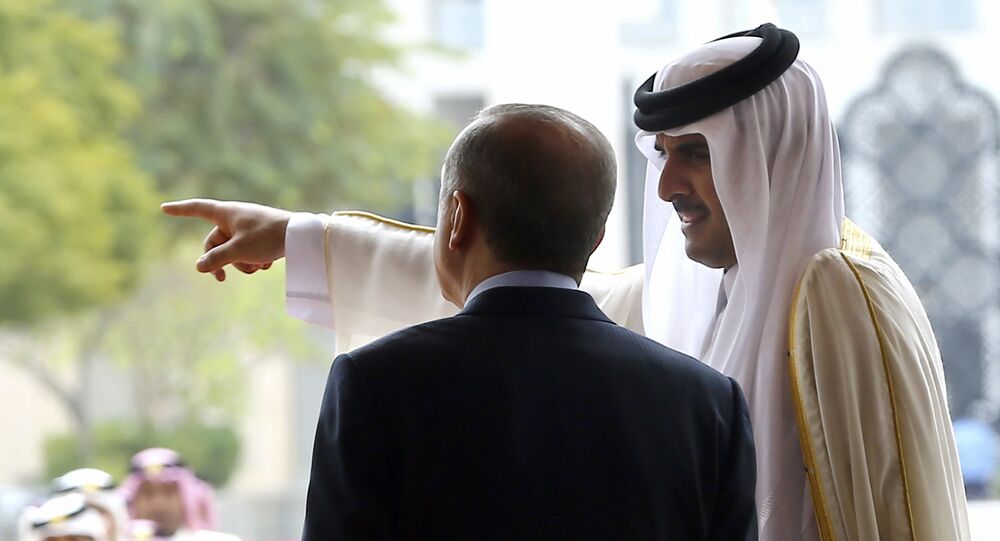 If a military conflict erupts in the Persian Gulf, Turkey and the US may find themselves on different sides of the trench, expert on the Middle East Faik Bulut told Sputnik Turkey.

© AP Photo / Yasin Bulbul, Presidential Press Service
What's Behind Turkey's Decision to Shield Doha From Saudi Anti-Qatar Coalition
In an interview with Sputnik Turkey, Middle East expert Faik Bulut did not rule out that Turkey and the US may wind up adversaries if there is a military confrontation in the Persian Gulf.

The interview came after Bahrain's Foreign Minister Khaled bin Ahmed Al Khalifa threatened Qatar with an "emergency regional intervention" if Doha refuses to abide by its agreements with other countries in the region.

This statement prompted a discussion on the possibility of a military confrontation in the Persian Gulf and Turkey's potential role in this crisis.

First and foremost, this can be explained by the fact that in the list of 13 items which was earlier sent to Qatar by Saudi Arabia, the United Arab Emirates, Bahrain, Egypt and Kuwait, there is a demand that Qatar close a Turkish military base.

Speaking to Sputnik, Faik Bulut said that "rather thoughtless actions by Ankara, undertaken under the influence of the ideas of 'Islamic romanticism', led to the Turkish military actually finding themselves in the epicenter of the Qatar crisis, which may turn into an open military confrontation."

Turkey rejects call from four Arab countries to shut down its military base in Qatar. https://t.co/guGHmq1B7f pic.twitter.com/hjCvkrgCIz

"Unfortunately, Turkey has repeatedly intervened in the situation in the region without weighing all the pros and cons. As far as foreign policy is concerned, Ankara adheres to an emotional impulse, caused by Islamic romanticism rather than a rational approach. This mostly leads to a failure," he said.

According to him, the main problem is that Turkey, which failed to show an unbiased approach to the matter, has lost the opportunity to mediate between the two sides and prevent an open military conflict in the region.

"Turkey taking Qatar's side resulted in a situation where we found ourselves on the verge of a clash directly related to America implementing its plans in the region and the policy of pressure on Iran. And if this conflict breaks out, Turkey, in fact, will not be able to do anything," Bulut said.

He described the threats issued with respect to Qatar as a tool to exert pressure on this Middle Eastern country.

"Qatar has not yet taken any counter-measures. I do not think that there will be a military confrontation in the immediate future. However, if the conflict erupts, it will lead to serious negative consequences for both Turkey and the whole region," Bulut pointed out.

"If Turkey says 'no' to the possible intervention of the Gulf nations, it will be on different sides of the barricades from the United States. In the event of a confrontation, Turkey will be one of the parties to the hot military conflict. On the one hand, Ankara will have to tackle America and on the other — the armed forces of the Gulf countries," he said.

© REUTERS / Qatar News Agency
Saudis Won't Resort to Intervention in Qatar While Turkey is There, in Fear of NATO Response
Bulut predicted that during a possible conflict, "Iran will take Turkey's side, while Russia, albeit indirectly, may also express support for this bloc at the diplomatic level."

According to him, the conflict can lead to the polarization of relations not only in the region but also among NATO members.

"This is something that would directly affect ties between Turkey and NATO," Bulut said.

"Germany and Britain are the two countries that are not exactly mad about a possible military intervention in Qatar. It remains to be seen what side and position these two countries will take in the event of a military conflict," he concluded.