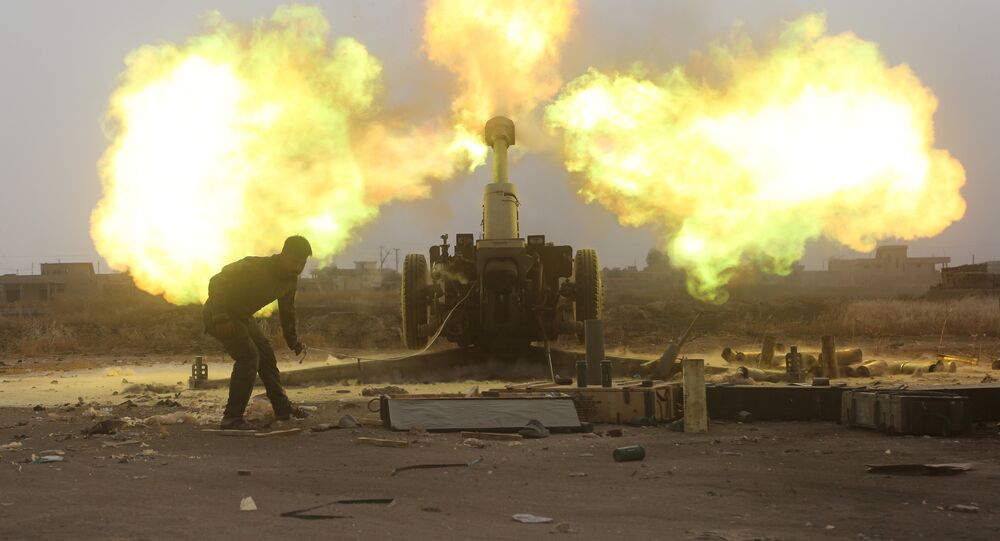 Based on an analysis of Daesh's recent territorial and financial losses, experts are predicting the end of its reign of terror in Iraq and Syria.

© REUTERS / Muhammad Hamed
Daesh Gives Its Recruits 'Passports to Heaven' to Boost Morale (PHOTO)
The Daesh terror group's "Caliphate" is likely to disintegrate by the end of the year, judging by recent developments, according to an expert report compiled by IHS Conflict Monitor, which uses geospatial intelligence and social media monitoring to track Daesh and other insurgent groups.

"Three years after the 'Caliphate' was declared, it is evident that the group’s governance project has failed."

After overrunning the Syrian city of Raqqa in January 2014 and Iraqi Mosul in June 2014, Daesh leader Abu Bakr al-Baghdadi declared an Islamic "Caliphate" in Iraq and Syria on June 29, 2014.

"The sun of jihad has risen … Here the flag of the Islamic State, the flag of tawhīd (monotheism), rises and flutters. Its shade covers land from Aleppo to Diyala," al-Baghdadi claimed in an online statement.

Since then, however, the group has been steadily losing ground thanks to anti-terror operations in Syria and Iraq, and is on the brink of losing both its strongholds.

On June 6, the US-backed Syrian Democratic Forces and their Syrian Arab Coalition partners launched an operation to liberate Raqqa from the terror group. Kurdish fighters have estimated that the operation will take several months.

Last week, the Russia Foreign Ministry said it is "highly likely" that Daesh leader al-Baghdadi was killed in a Russian airstrike on a group of terrorist leaders attending a Daesh military council south of Raqqa on May 28.

© Photo : Russian Defence Ministry
On the left: Daesh headquarters in Raqqa on May 13; on the right: Daesh headquarters in Raqqa after the Russian airstrike. The target is completely destroyed
On Thursday, the Iraqi ministry of defense announced that Daesh had been driven out of all districts of the city of Mosul, ending an anti-terror operation that began last October.

In addition, Iraqi government forces and Iran-backed militias are preparing to eliminate the last remaining pockets of Islamic State control in Hawija, Tal Afar and al-Qaim once the Mosul operation is complete, the report says.

"The Islamic State's remaining caliphate is likely to break up before the end of the year, reducing its governance project to a string of isolated urban areas that will eventually be retaken over the course of 2018," Strack said.

Youtube/NavyRecognition (Screenshot)
Italy Drops Off Assad Warships to Iraq Decades Behind Schedule
The loss of territory has resulted in a huge reduction in revenue from oil production and smuggling, taxation and confiscation, and other illicit activities. The researchers estimate that the group has suffered an 80 percent reduction in average monthly revenue, from $81 million in Q2 2015 to $16 million in Q2 2017.

"Losing control of the heavily populated Iraqi city of Mosul, and oil rich areas in the Syrian provinces of Raqqa and Homs, has had a particularly significant impact on the group’s ability to generate revenue," said Ludovico Carlino, senior Middle East analyst.

"Although the Islamic State still appears to be involved in some commercial activity, especially oil production, there are indications that it is attempting to increase its financial 'reserves,' accelerating the shift from a highly bureaucratic and centralized quasi-state economy towards funding a future insurgency through a real war-economy. An attempt to force people living in the Caliphate to pay all transactions with the Golden Dinar – the group's currency announced last year – is the most evident indicator of this trend."

Analysts have suggested that the group is likely to try attempt more terrorist attacks outside the Middle East in an attempt to compensate for its shrinking influence.

© AP Photo / Ford Williams/U.S. Navy
Waving a False Flag: 'Washington Just Waiting for a Pretext to Strike Syria'
Rhiannon Smith, Managing Director of Eye on ISIS in Libya and Libya-Analysis, told Radio Sputnik that Daesh may try to relocate to Libya or south in the Sahara in order to regroup after they have finally been driven from their last pockets of territory in Iraq and Syria.

"It may be more that they spread out and use places such as Libya and elsewhere to conduct more attacks in Europe in order to try and keep the momentum of ISIS and also the recruitment from around the world," Smith said.

Daesh has reportedly banned its members from using social media, and has lost the key figures of al-Baghdadi and the Bahraini cleric Turki al-Binali. Smith said that Daesh may turn to somebody who can provide leadership in a guerilla conflict.

"It shows that ISIS is very much on the back foot, they've lost their territory, they've lost their ability to recruit as easily as they did, so this shows a shift in tactics toward a more clandestine, hidden secretive organization that is going to be more looking to plan terrorist attacks rather than taking over territory and trying to promote itself as a state-like entity," Smith said.