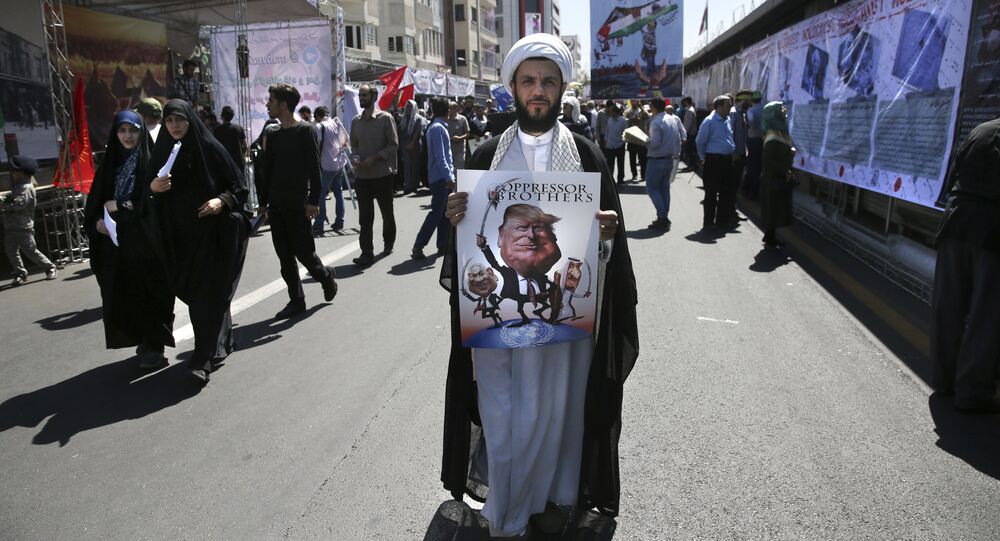 On Monday, July 3 the International Cartoon and Caricature Contest is set to kick off in Tehran. This year US President Trump will be the major focus of cartoonists from all over the world, who will be competing to satirize his most infamous quips and remarks. Sputnik discussed the contest with Seyed Massoud Shojaie Tabatabaie, curator of the show.

© AFP 2021 / MARWAN NAAMANI
London-Based Saudi Newspaper Cartoon Depicts Workers as Rats
558 cartoonists from 75 countries have already submitted work satirizing Donald Trump and his most famous remarks. 1614 cartoons and caricatures have been selected, with 168 pieces from Iran, with significant contributions from Brazil, Argentina, Uruguay and other countries of the Latin America, as well as from China, Indonesia, Japan, Australia, the Middle and Far East, Turkey, Europe and Russia.

Starting from Monday, they are going to be on display in Iran. The contest has been organized by the Foundation for the Preservation and Publication of Sacred Defense Works and Values, and Tehran Municipality’s Beautification Organization.

Sputnik Persian sat down with Seyed Massoud Shojaie Tabatabaie, the curator of the exhibition, to talk about the event.

"Trump for us is a certain phenomenon in the world politics, who has had an impact on the global developments. We decided to choose his personality as a symbol of the US' capitalist regime. And we decided to make it the main narrative of the cartoon and caricature contest as the ideas promoted by Donald Trump are comic, ludicrous and very close to the genre of cartoons," he told Sputnik.

© REUTERS / Sebastian Scheiner/Pool
Israel's Netanyahu Slams Iran for Holding Holocaust Cartoon Contest
"For example, when he talks about the wall between the US and Mexico, it sounds very stupid and reckless when he also demands that Mexico pays for it. The same can be said about his relations with the mass media and his sexism towards women," he added.

The expert further mentioned that some have compared Trump's behavior with that of Adolf Hitler, noting that inherently, the ideas which have been proposed by Trump, are reminiscent of the Hitler’s ideology. For example, his ideas of the superiority of the US over other countries as a great power, or about superiority of one nation over another, "this is Nazism and racism," he said.

The expert said that the organizers have set prizes for the winners in each nomination, offering $500 for third prize, $1,000 for second while the winner will get $1,500. The international jury, who will judge this year’s event, is comprised of winners from previous competitions: Luc Descheemaeker from Norway and Silvano Mello from Brazil, as well as Iranian cartoonists Mohammadreza Doustmohammadi, Habibollah Sadeghi and Mahmoud Azadnia.

It was not an easy task to select works for the competition, he said, adding that each category will contain 10 pieces.

One of the key additions is that the organizers have made agreements with a number of countries, including Panama, Columbia, Belgium, The

Netherlands, Morocco, Syria and Indonesia, to open their own Trumpism exhibitions on the very same day. In addition, there will be an online broadcast of the competition in Iran. The works will be then exhibited in the aforementioned countries.

© AFP 2021 / BEHROUZ MEHRI
Iran Poised to Test West's Freedom of Speech With Holocaust Cartoon Contest
The expert said that there are ongoing negotiations with Russia's well-known cartoonist and animated cartoon artist Sergei Tunin, on a display to be held in Russia. Tunin has participated in numerous cartoon competitions in Iran as an honorary member of the jury.

Interestingly enough, four professional cartoonists from the US will also participate in the contest. The largest number of cartoons however came from Brazil where 55 cartoonists entered the competition, the expert said.

Tabatabaie also noted that the contest isn’t just about bringing people together who have the same ideas, but is also about discovering and revealing the true nature of Donald Trump himself.

"Caricature is a peculiar language of an artistic satire, without words and prose, which is able to unite people of various nationalities. Humor is similar to a sweet delight which is able to unveil a lie which is being hidden," he told Sputnik.

The organizers are using cartoons and caricatures as a weapon to reveal the real personality of the new US president. Trump, he said, is a symbol of an American totalitarianism, who considers himself a ruler of the world. That is why the exhibition is very important as it helps the public to understand who the real face of President Trump, he finally stated.