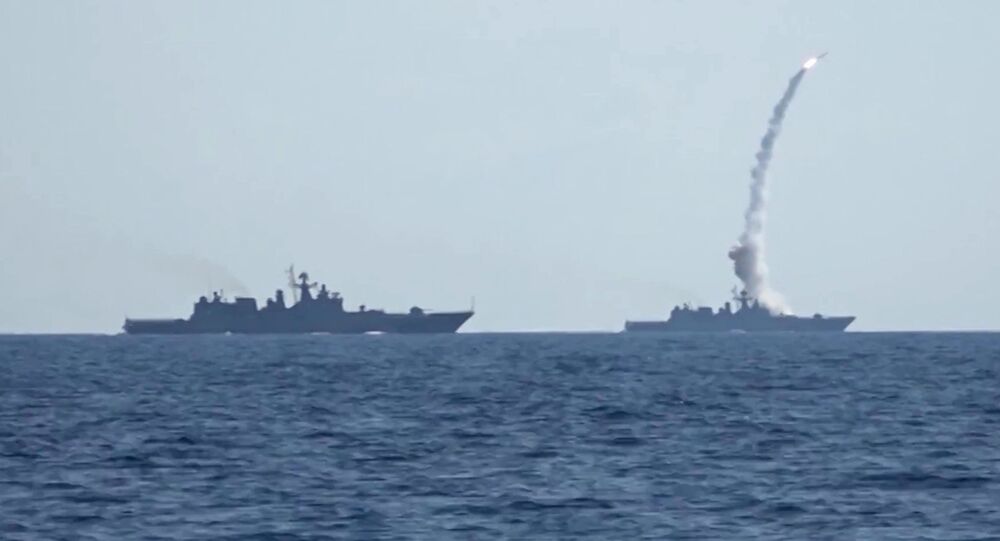 MOSCOW (Sputnik) – A total of six Kalibr cruise missiles were launched from the eastern part of the Mediterranean by two Russian Navy frigates: the Admiral Essen and Admiral Grigorovich. Meanwhile, the Russian Krasnodar submarine performed a submerged launch of cruise missiles.

"As a result of a surprise saturation missile attack, Daesh command posts, as well as large ammunition depots, have been destroyed in the vicinity of the town of Akerbat in the province of Hama, where a militant arsenal detonated after a pinpoint hit by the Kalibr cruise missile," the Russian ministry said.

“The Russian Navy again demonstrated its capabilities of effectively attacking the remote targets by using the complexes of high-precision weapons such as Kalibr in the shortest possible time after receiving the military order,” the defense ministry noted.

Russia's attack was prompted by the deployment of the Daesh terrorist group to the Hama province by way of different routes in order to organize operational headquarters and ammunition warehouses in the region, according to the ministry.

"During the recent week, the formations of Daesh have continued their efforts to leave Raqqa for Palmyra using the 'south corridor.' At night, taking advantage of a difficult terrain, terrorists deploy militants to the Hama province via various routes, where they plan to set up command posts in large buildings, as well as weapons and ammunition depots," the ministry said.

Reestablishing control over Sergiopolis is especially notable, as the town, known as Resafa in Arabic and located just southwest of the city of Raqqa, has great historical and archaeological significance. Resafa is an ancient Roman city from the Byzantine times and is known for its partially preserved walls of temples, palaces, and streets.

Syrian government troops, with aerial support from aircraft of both Russian and Syrian air forces, also regained control over the T-3 oil pumping station, located to the southeast of the city of Palmyra.

Strikes From the Sea

Russian Defence Ministry
Pinpoint Precision: Russia Uses Kalibrs Only on Significant Targets in Syria (VIDEO)
Prior to the recent attack, the Russian Navy's Admiral Essen frigate and Krasnodar submarine launched four Kalibr cruise missiles from the eastern Mediterranean Sea and targeted Daesh terrorists in the area of Palmyra on May 31.

Russian Kalibr cruise missiles have been used by Russian armed forces to fight Daesh in Syria since 2015.

The missiles were used for the first time on October 7, 2015, when the Russian Navy warships joined the Syrian operation for the first time. The Dagestan, Grad Sviyazhsk, Veliky Ustyug and Uglich warships launched 26 cruise missiles from the Caspian Sea and destroyed 11 targets of Daesh.