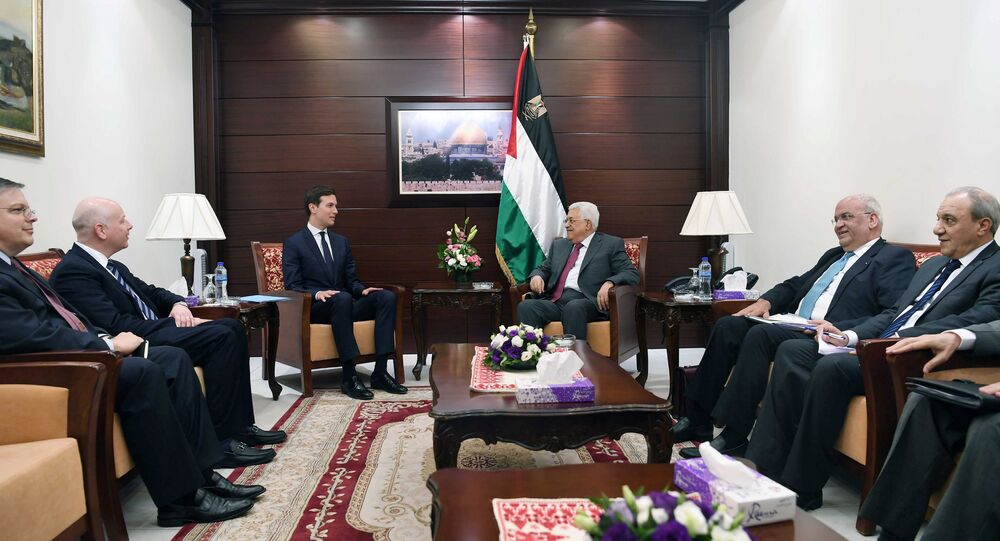 Commitment from the White House and Arab states to lay the groundwork for a Israeli-Palestinian peace process makes the prospects for bringing the two parties to the negotiating table more realistic, Dr. Nimrod Novik, a member of the Executive Committee of Commanders for Israeli's Security, told Radio Sputnik.

On Wednesday, White House special adviser Jared Kushner landed in the Middle East for a short visit aimed at restarting peace talks between Israelis and Palestinians.

The 15-hour-visit began with a visit to the family of Hadas Malka, an Israeli police officer who was killed in an attack by Palestinian assailants on Friday.

Kushner was given a warm welcome by Israeli leader Benjamin Netanyahu, before he traveled to the West Bank for talks with Palestinian leader Mahmoud Abbas.

Dr. Nimrod Novik, a former Senior Advisor to former Israeli President Shimon Peres and currently a member of the Executive Committee of Commanders for Israeli's Security, told Radio Sputnik that Kushner's visit conveys the message that the White House remains committed to reaching what Trump has described as "the ultimate deal" between the Israelis and Palestinians, regardless of the troubles the Trump administration is currently having in Washington.

"One message was, we are in this for real, we are serious and we expect you to be serious as well. I think the other message, which is a lesson from past experiences, is that the primary negotiator, the White House chief negotiator Jason Greenblatt, is indeed speaking for the President."

"Because the parties, both the Israelis and Palestinians, whenever they see a gap between the mediator and the President, they assume that the mediator does not enjoy presidential backing and Jared Kushner's visit is meant to put an end to any such thought," Novik said.

© Sputnik / Pavel Lisitsin
Israel Cuts Power Supplies to Gaza in Palestinian Authority Move to Oust Hamas
Like Kushner, the President's son-in-law, Greenblatt is an Orthodox Jew and has deep ties with Trump. As a lawyer, he had worked for the Trump Organization since 1997 before being appointed Representative for International Negotiations in the Trump White House.

"Both Mr. Kushner and Mr. Greenblatt have no previous experience negotiating this, but what I see emerging is the breath of fresh air of two individuals with no baggage from past failure, hiring highly-experienced professionals from the State Department, CIA and other agencies to support their effort. So jointly, I think there is a fairly powerful team that is working on this."

Novik said that Kushner and Greenblatt appear to be cautious about the prospects for a peace deal and understand how long and complicated the process of finding a deal will be.

"I believe that Mr. Kushner left the region more sober about the difficulties and how long it will take and that found expression in the White House report of the visit. These things will take time, artificial deadlines are a prescription for disappointment and frustration, and bringing the parties into the room prematurely may be a prescription for failure. So I think they are working very thoroughly on laying the groundwork before they bring the parties – Mr. Netanyahu and Mr. Abbas – into the negotiating room."

© AP Photo
'Stop Ethnic Cleansing': Hundreds Outraged by Israeli Policies of Genocide Take to London Streets
Before they come to the negotiating table, the two sides need to take steps to change the atmosphere of "cynicism and skepticism" that pervades on the ground in the region.

"If you want Israeli support and urge their government to go for it, and Palestinians to do the same for the Palestinian authority, they have to start believing that maybe there is a change. And the way to change public perceptions is for the two sides to take steps that change the atmosphere, that don't do harm to the process, and I think this is what Kushner and Greenblatt have been focusing on."

The prospects for a peace deal involving a two-state solution are helped by the more positive attitude from regional Arab powers. They are keener than they have been in the past to reach a compromise with Israel that would at least start the peace process, because they want Israel's help to fight some of the challenges they face.

"What works for them is the changed atmosphere in the region, where you have pragmatic Arab countries willing to make a contribution to the process because of other considerations. Primarily, their wish to bring into play Israeli capabilities, intelligence and otherwise, into the joint concern with Iranian regional ambitions, the ISIS phenomenon and other destabilizing factors.'

"In order to be able to 'go out in public' with Israeli security capabilities, they need to legitimize this process with progress on the Palestinian issue, so they came up with a list of things they are willing to do in order to help the process, but they are all conditional on Israel demonstrating its sincerity to get the process going."

© AP Photo / Mahmoud Illean
UN Slams Israeli Settlements as Main Cause of Palestinian Suffering
Novik said that during previous negotiations, both the Israeli and Palestinian governments were fighting political battles on three fronts. Firstly, they tried to placate their own people who don't want to deal with the other side, secondly they tried to be in favor with the Americans. Thirdly they attempted to ensure that if the talks fail, they won't get the blame. They were "playing the blame game" and accusing the other side of attempts to undermine the process.

Just days before Kushner's visit, Netanyahu announced the start of construction work on a controversial new Israeli settlement in the West Bank. While recent settlement-building has been located on the site of existing settlements, the new town, called "Amichai," is the first new town the Israeli government has built in the West Bank for some 25 years.

"What you saw in that settlement activity was the Prime Minister trying to cater to his base, which got really worried that the Prime Minister is going in a direction that his base, which is hostile to the two-state idea, doesn't like. So he is giving them something to calm spirits over there as he is working with the administration on preparing exactly what they are worried about."