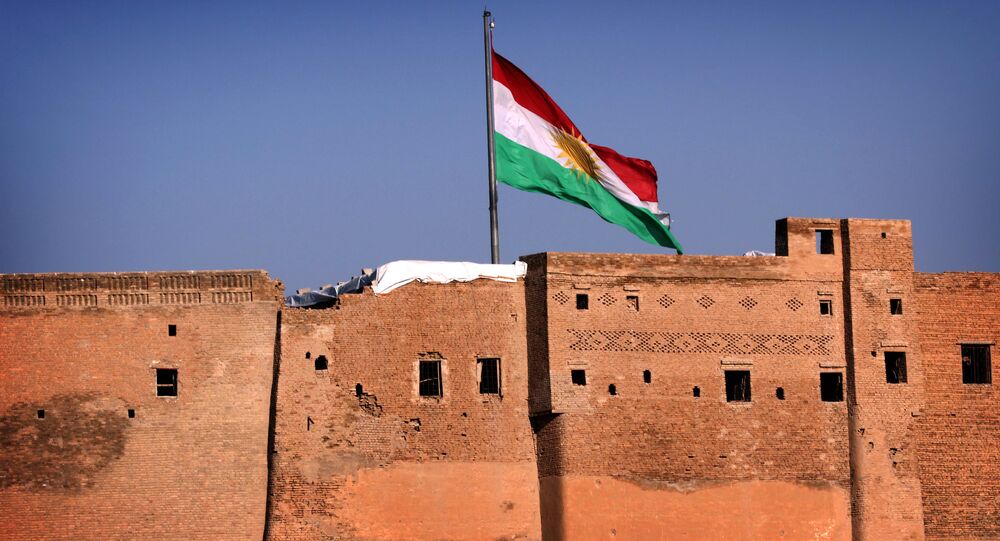 Iraq's Kurdistan Regional Government (KRG) has set September 25 as the date for an independence referendum throughout Iraqi Kurdistan, as well as territories claimed by both Iraqi Kurdistan and Iraq. Sputnik Turkiye discussed the issue with Turkish political analyst Ceng Sagnic, who explained why the Iraqi Kurds want to vote on independence.

© AFP 2019 / AHMAD AL-RUBAYE
By Supporting Kurds, the US Tries to Set Up the 'Second Israel'
On September 25, the Iraqi Kurds are set to vote on their independence.  The referendum will be held throughout Iraqi Kurdistan, as well as territories of the Nineveh, Kirkuk, Saladin and Diyala provinces claimed by both Iraqi Kurdistan and Iraq.

Turkish political analyst Ceng Sagnic, an expert on the Kurdish region, commented to Sputnik Turkiye on the upcoming vote, suggesting that thus the Iraqi Kurds are trying to "shape and document" their success in the fight against Daesh.

"If there are no unforeseen circumstances, the independence referendum will be held on September 25 throughout Iraqi Kurdistan and the so-called disputed territories. However it could be said for sure that there will be no immediate declaration of independence right after the vote. It will be a gradual process, during which the Iraqi Kurdistan Regional Government will be engaged in active dialogue with the central Iraqi authorities," the expert told Sputnik.

"By holding the referendum, the Iraqi Kurdistan Regional Government wants to demonstrate that not only the residents of the Iraqi Kurdistan but of the disputed territories as well long for independence. Taking into account the latest developments in the region and in Iraq in particular, the Kurdish authorities clearly understand that if they delay the vote any longer, the process may get ultimately stalled," he said.

© AFP 2019 / SAFIN HAMED
Iraqi Kurdistan Invites International Observers to Monitor Independence Vote
That is why the KRG demonstrates firm determination. The Iraqi Kurds are concerned about the further developments in the region after Daesh are eliminated.

"The vote is an attempt to grant a certain legal status to the border territories and thus shape and document the success of the Iraqi Kurds in the fight against Daesh. Without it, they feel that they will be at risk in the post-Daesh Iraq. Hence they undertake certain steps aimed at initiating a provess of normalization of relations between the central Iraqi government  and Erbil (the capital city of Iraqi Kurdistan," Ceng Sagnic said.

While commenting on a possible reaction of the neighboring Middle Eastern counties, the US or Europe, the expert said that upon making the decision on the vote, the KRG did not expect any support in this issue as all the above countries have diplomatic ties with Iraq. Iraq won't support the initiative on the independence of one of its regions. Hence the negative reaction of the international community comes as no surprise to the Iraqi Kurds, he finally stated.