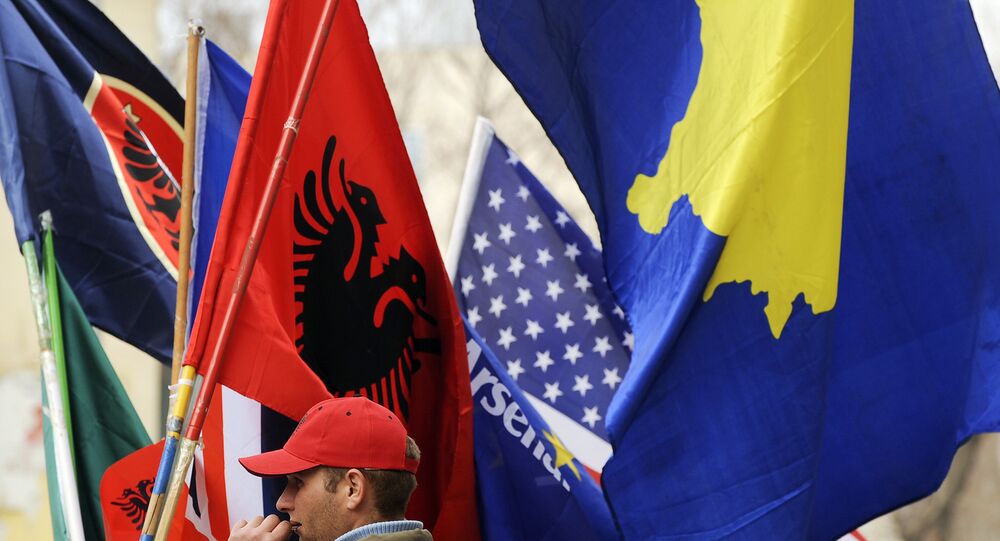 Turkish President Erdogan's comments on "Greater Albania" reflect his fear that a redrawing of borders for Albanians in the Balkans would give encouragement to Kurds in the Middle East, experts told Sputnik.

© AP Photo / Darko Vojinovic
Albanians Seek to 'Demonstrate That Serbs Have No Place in Kosovo'
On Monday, Turkish President Recep Tayyip Erdogan told Albania's Top Channel broadcaster that Ankara is opposed to the "Greater Albania" ideology, which seeks to unite ethnic Albanians living in Albania, Kosovo and Macedonia into a single state.

Erdogan was asked for his view on comments by Albanian Prime Minister Edi Rama, who again raised the prospect of Albania's unification Kosovo in an interview with Politico last April.

"These are bad ideas. You see what is happening in the Middle East, Iraq and Syria. We don't want this kind of crisis to come to the Balkans. We are in favor of the sovereignty and territorial integrity of the Balkan countries," Erdogan said.

Erdogan's emphatic response comes in spite of his commitment to a Neo-Ottoman relationship with parts of the former Ottoman Empire.

In 2013, when he was Prime Minister, Erdogan visited the Kosovan city of Prizren and caused controversy by saying, "Kosovo is Turkey, and Turkey is Kosovo."

The statement was met with outrage in Serbia, where President Tomislav Nikolic said that "The ideas of [the founder of modern Turkey, Mustafa] Kemal Ataturk are no longer the ideas of the Turkish leadership."

© Flickr / The U.S. Army
Second Kosovo? US 'Proxy' Strategy in Syria Risks Going Too Far
Erdogan is also keen to exert influence in Sarajevo, and paid tribute to Bosnia's wartime leader Alija Izetbegovic, who he claimed "left" Bosnia and Hercegovina to him when he died in 2003.

In 2012, Erdogan told Sarajevo's Oslobedjenje newspaper that when he visited the ailing former President in a Sarajevo hospital, he told him, "Bosnia is bequeathed to you. Don't leave this place."

According to a source in Belgrade's diplomatic circles, Erdogan's recent statement in favor territorial integrity in the Balkans is a result of fear of that Kurds in Turkey, Syria and Iraq could unite into a single state of Kurdistan.

Slobodan Yankovic, an analyst at Belgrade's Center for Conservative Research, told Sputnik that it is too soon to draw conclusions from Erdogan's latest comments.

"Erdogan visited Albania, gave it political and economic support and expressed hope that the next elections will be result in a leader who will cooperate with Turkey. Erdogan's main message was: Albania should crack down on private schools and faculties that are part of the Fethullah Gulen network."

"Albanian politicians in Pristina have repeatedly spoken about Ankara's role in creating the 'state' of Kosovo. In addition, for the Turks, Albanians and Bosnians are a foothold in the Balkans. Nothing significant will change in Ankara's policy after this statement."

Yankovic also thinks Erdogan's statement regarding "Greater Albania" is a reflection of his fear of a "Greater Kurdistan," since there are approximately 15 million Kurds living in southeastern Turkey.

"Turkey, while recognizing the secession of Kosovo from Serbia, is afraid of a revision of the borders. He is also afraid of the independence referendum in Iraqi Kurdistan, which is slated to take place in autumn this year not only there but in several other important municipalities such as Sinjar," Yankovic said.