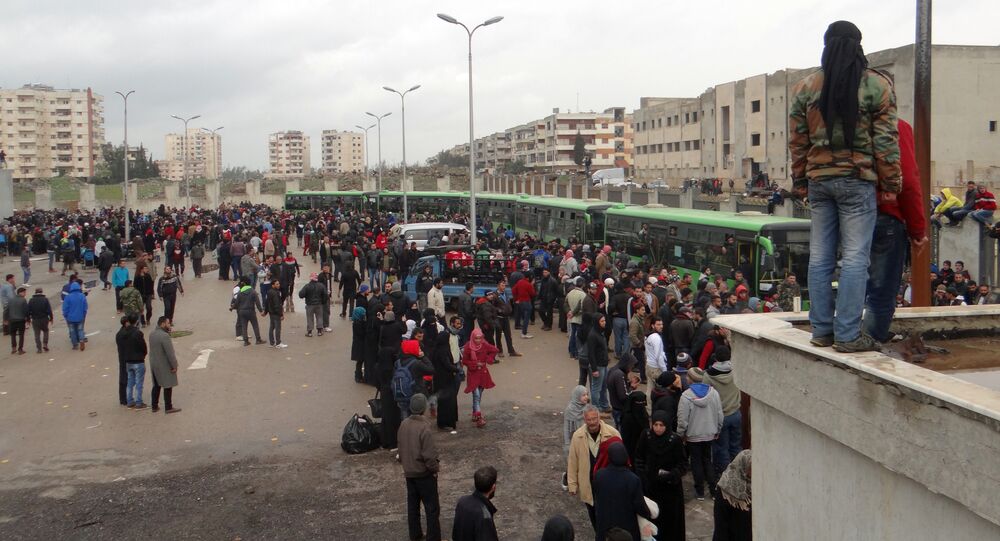 © Photo : Mohamed Maaruf
'Fragile Peace' in Syria's Aleppo is Threatened by Terrorist Clusters
MOSCOW (Sputnik) — Over 6,000 militants were identified in the Syrian city of Aleppo since 2016, more than 3,000 of whom were granted amnesty, Igor Yemelyanov, head of the Russian Defense Ministry's Center for Syrian Reconciliation, said Wednesday.

"As a whole, since 2016, over 6,000 militants were identified by the efforts of the center, 3,322 of them were granted amnesty," Yemelyanov said during a video link-up between Moscow and Aleppo, carried out in the press center of Rossiya Segodnya International Information Agency.

Since August 1, 2016, the center carried out 752 humanitarian actions as part of which 850 tonnes of humanitarian aid were distributed among the Syrians, Yemelyanov noted. Apart from this, over 30,000 civilians, including 19,000 children received medical help, the official noted. The Russian side granted some 16 tonnes of medicines to the hospitals in Aleppo, Yemelyanov added.

"In the refugee camps, over 20 tonnes of warm clothes, blankets and sleeping bags were distributed. The schoolchildren in Aleppo were given 5,000 school bags containing presents from the Russian children," Yemelyanov pointed out.

© REUTERS / SANA
Setting the Story Straight: Russian Diplomat Writes Book About Aleppo Liberation
Since the beginning of the work of the Russian Center for Syrian Reconciliation in Aleppo, over 69,000 people returned to their homes, including over 40,000 children, Yemelyanov stressed.

"The city of Aleppo is currently gradually returning to normal life — the schools, hospitals are open, the cultural and sports events are carried out. All this became possible owing to the joint work of the Reconciliation Center and the city's administration," the military official concluded.

Since the beginning of the military crisis in Syria in 2011, Russia has been supporting the country’s government in fighting terrorist groups, including the Islamic State (ISIL or Daesh, outlawed in Russia). Besides, Russia has been providing Syrian civilians affected by the conflict with medical help and regular humanitarian aid deliveries to help them survive until peace is restored in the country.