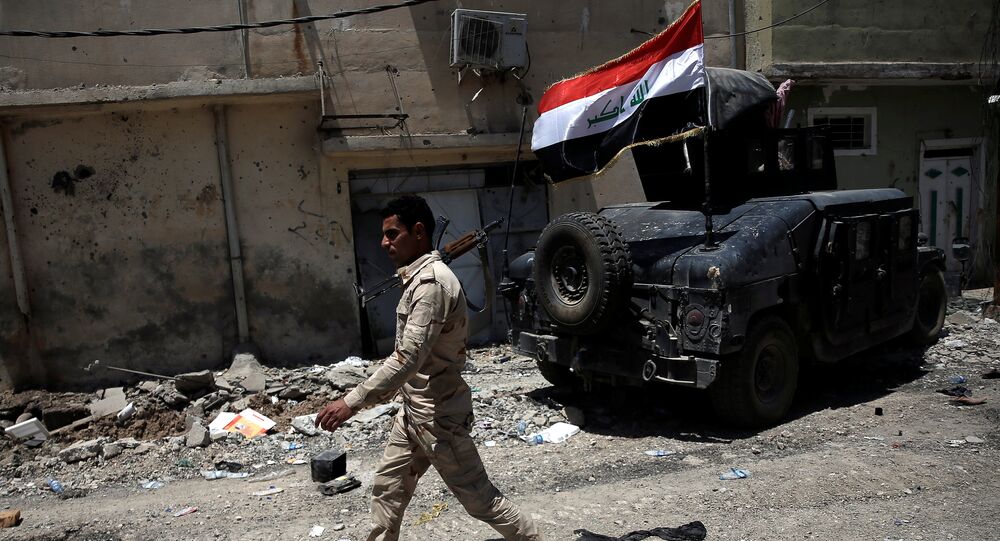 The Iraqi-led coalition is on the brink of driving Daesh out of Mosul, eight months after the offensive began to liberate the city, Iraqi volunteer fighters told Sputnik.

© Flickr / Mohamed Somji
Female Sniper in Hijab Killed by Iraqi Forces in Mosul
Iraqi government forces, with the backing of the US-led anti-Daesh coalition, launched an operation to recapture the Iraqi city of Mosul in October 2016.

Eight months later, Iraqi forces have announced the imminent liberation of the city from Daesh (ISIS).

On June 10, Iraqi federal police commander Raed Jaudat announced that police had freed the Zanjili district of Mosul, one of the last neighborhoods under Daesh control.

On Tuesday, Mahmud al Surji, a spokesman for the Iraqi volunteer forces, told Sputnik that Iraq's 9th Armored Division is conducting a successful offensive against Daesh. The army is attacking the terrorists' last stronghold in the city, in the Bab Sinjar district of western Mosul.

"The district will be liberated in the next few hours," al Surji told Sputnik.

Habib Hadi al Sadr, Iraq's ambassador to Egypt and the country's permanent representative at the Arab League, told Sputnik that the operation has taken this long because Daesh uses civilians as human shields.

As a result, Iraqi government forces did all they could to minimize civilian casualties, including aiming artillery fire with the utmost caution.

Hadi al Sadr also discussed the recent conflict between Qatar and several of its Arab neighbors, who have announced sanctions against the Gulf state. He said that since the overthrow of Saddam Hussein in 2003, Baghdad has sought to take a neutral position in foreign affairs.

"Iraq takes the most neutral position possible and only fights with its main enemy – terrorism," al Sadr said.

© REUTERS / Thaier Al-Sudani
Ninth Chemical Attack by Daesh Kills Women and Children in Mosul
He added that Iraq is keen to build long-term cooperation with Russia, since Moscow played no part in the 2003 invasion which devastated the country, one Putin described as a "big political mistake."

The city of Mosul has been occupied by Daesh since June 2014. The operation to retake it began on October 17, 2016 and resulted in the liberation of the east of Mosul in January.

The operation to liberate the city's western areas began in February; since then half a million people have fled to the city's West.

Iraqi troops and their allies, including local Sunni militias and the US-led coalition against Daesh, are involved in the offensive.

Civilians in Mosul have endured chemical weapons attacks launched bny Daesh as well as bombs dropped by the US-led coalition. One US airstrike in March killed over 200 civilians in the neighborhood of Mosul al-Jadida, where Iraqi and coalition forces are battling Daesh militants.