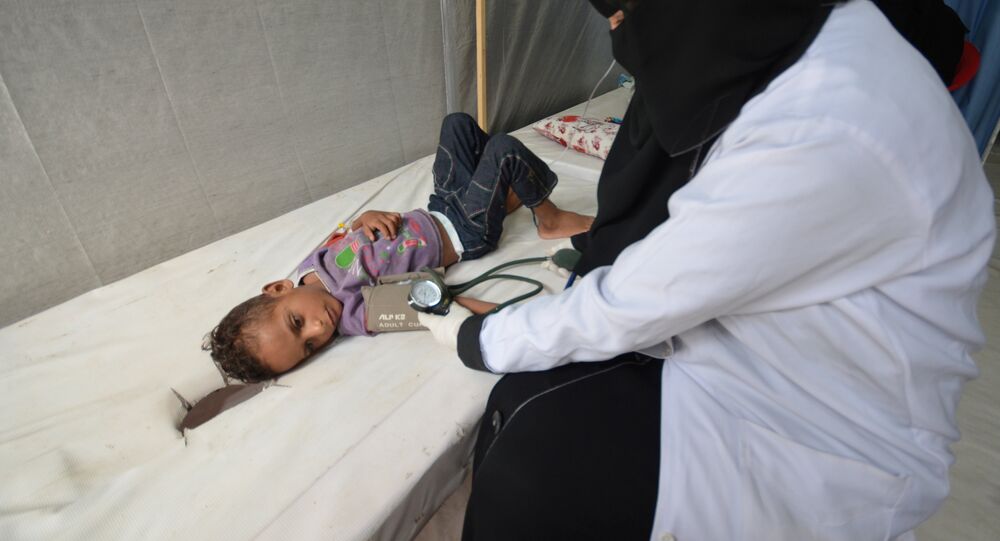 United Nations Children's Fund representative in Yemen said that cholera outbreak in Yemen continues to spread, with more than 124,000 cases recorded so far, half of them are children.

© REUTERS / Abduljabbar Zeyad
Over 900 Yemenis Die of Cholera Outbreak Since Late April - WHO
MOSCOW (Sputnik) – The cholera outbreak in Yemen continues to spread, with more than 124,000 cases recorded so far, half of them are children, the United Nations Children's Fund (UNICEF) representative in Yemen said in a statement on Tuesday.

"The cholera outbreak in Yemen continues to spread at an alarming speed. Over 124,000 cases have been recorded – almost half of them are children," Meritxell Relano said.

According to UNICEF, a total of 923 Yemenis became victims of the cholera outbreak in the country since late April and children accounted for one quarter of the deaths.

Relano highlighted that the number of the functioning health institutions was limited, while hospitals were struggling to provide proper treatment to the large influx of patients.

"The cholera outbreak is overwhelming what remains of Yemen’s conflict-battered health system. Hospitals and treatment centers are struggling to cope with the large number of patients coming in from across the country. Medicines and intravenous fluids are quickly running out," Relano said.

The UNICEF representative stressed that despite these massive challenges, health workers continued to make efforts in responding to the emergency, even receiving no salaries for months.

The organization called for an urgent solution to the ongoing crisis stressing that otherwise the cholera outbreak and some other diseases would "continue to stalk the lives of children."

The cholera outbreak in Yemen was announced by the country's health authorities on October 6, 2016. The World Health Organization (WHO) estimates that 7.6 million Yemenis live in areas with a high risk of cholera transmission.

The health situation in the country is aggravated by the civil war between the internationally recognized government of Yemeni President Abd Rabbuh Mansur Hadi and the Houthi movement backed by army units loyal to former President Ali Abdullah Saleh erupted in March 2015. Shortly after the outbreak of the conflict, the Saudi-led coalition of mostly Persian Gulf countries launched airstrikes against the Houthis at Hadi's request.

The UN Office for Coordination of Humanitarian Affairs (OCHA) characterizes the situation in Yemen as "the largest humanitarian crisis in the world," with 18.8 million people in need of humanitarian assistance, including 10.3 million who require immediate aid to save or sustain their lives.