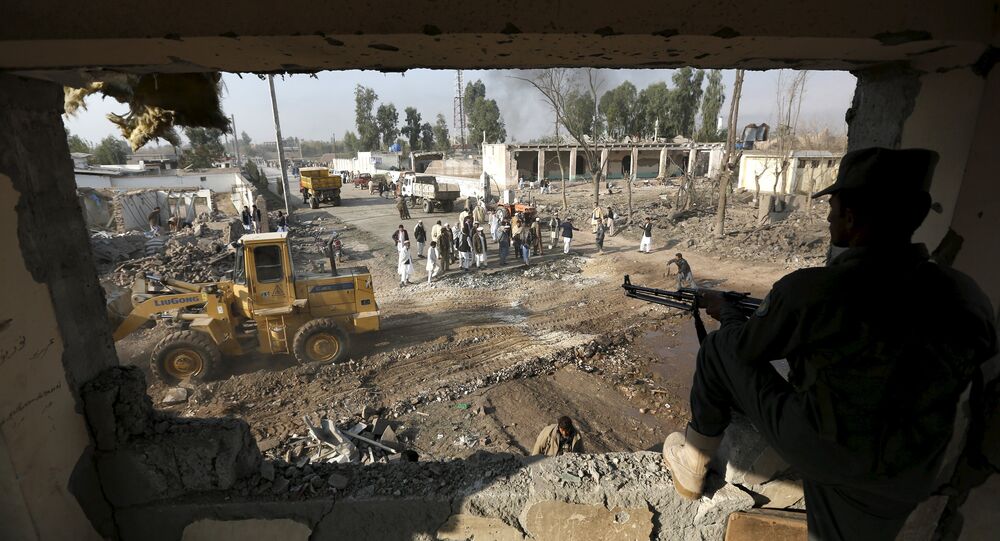 Three US soldiers have been killed during a firefight with an Afghan soldier in the Nangarhar province of Afghanistan. The Taliban has taken responsibility for their deaths.

© REUTERS / Fabrizio Bensch/File Photo
Germany, NATO to Keep Troops in Afghanistan for Long Period
An official statement by the Pentagon confirmed that three soldiers were killed and another injured in the incident, which appears to be an insider attack. Their names have not been disclosed, as the Department of Defense is notifying the next of kin. The White House has been briefed on the incident, according to media reports.

"Three US soldiers were killed in eastern Afghanistan today. One US soldier was wounded and has been evacuated for medical treatment. Next of kin notification is underway. This incident is under investigation. Additional information will be released as appropriate," the statement said Saturday.

The US Defense Department is conducting investigation, Pentagon said in a statement.

According to Attahullah Khogyani, a spokesman for the governor of the province of Nangarhar, two soldiers were killed and two wounded in the attack, and one of the wounded died later.

The Afghan Army soldier who apparently opened fire on the Americans was shot dead during the fight. According to CBS News, he was a commander of 11-soldier unit.

The media reports that the incident occurred as US and Afghan forces returned from a joint operation, the Afghan source said. The area has been cordoned off by U.S. troops.

16 years and here we are today. Still getting killed by the Taliban https://t.co/FchIigkTU4

​The Taliban claimed responsibility for the attack, claiming the Afghan soldier was a Taliban infiltrator. The group reportedly named the attacker as Obaidullah from Kunar province, releasing a photo purporting to be him.

Excluding these three soldiers, four US troops have already died in Afghanistan in 2017, with three of them being combat casualties. All incidents happened in the same province of Nangarhar, according to military.com.

Afghanistan has never truly stabilized due to continued fighting between the government forces and the Taliban, which seized vast territories in the Afghan rural areas. The instability has also prompted the emergence of the local cells of other extremist organizations such as the Daesh terrorist group.