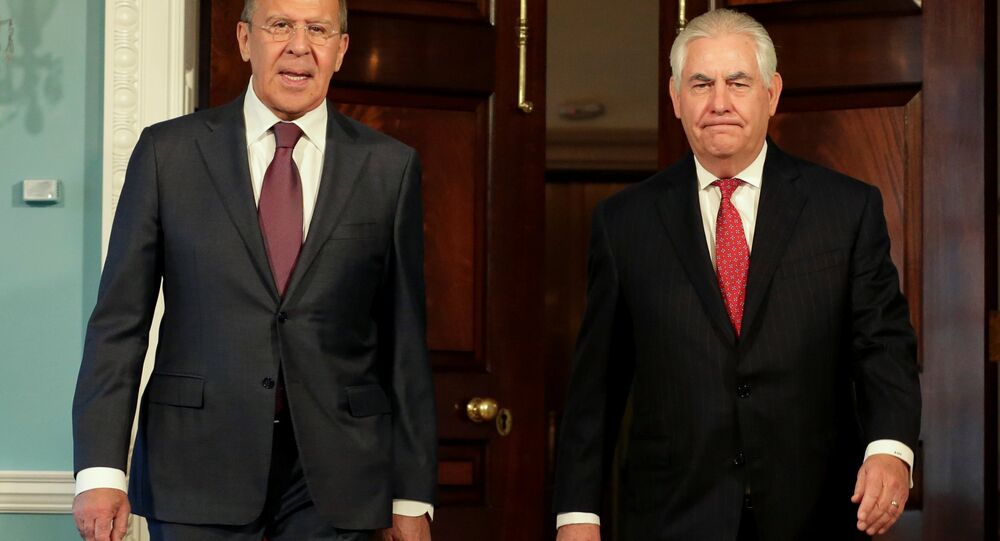 The Qatar diplomatic crisis can be resolved only through negotiations, Russian Foreign Minister Sergey Lavrov and US Secretary of State Rex Tillerson concluded on Saturday after a conversation, adding that they were ready to promote such efforts.

MOSCOW (Sputnik) — Russian Foreign Minister Sergey Lavrov during a phone conversation with US Secretary of State Rex Tillerson on Saturday stressed the need to settle Qatar crisis through negotiations, the parties expressed readiness to contribute to the settlement, Russian Foreign Ministry said.

"The consequences of the severance of diplomatic relations with Qatar by a number of Arab states were discussed. Sergey Lavrov and Rex Tillerson stressed the need to resolve the differences through negotiations and expressed their readiness to promote such efforts,"  the ministry said.

The sides also discussed topical issues of Russian-US relations, including a schedule of forthcoming bilateral contacts.

© Sputnik / Anton Denisov
Military Assistance to Qatar an 'Impulsive Step Driving Turkey Into Corner'
On Monday, Saudi Arabia, Egypt, Bahrain and the UAE cut diplomatic ties with Qatar and embargoed all sea, air and land traffic to the country. Other nations have followed suit, accusing Qatar of supporting terrorists and destabilizing the Middle East.

On Wednesday, media reported that Riyadh set out several conditions for Qatar to normalize the bilateral relations including the expulsion of all the members of the Muslim Brotherhood terror group (outlawed in Russia) and the Palestinian Hamas movement from the country, as well as the immediate break of the diplomatic ties with Iran.

US Senator: Trump Is Right to Support Arab-Led Effort to Change Qatar's Behavior