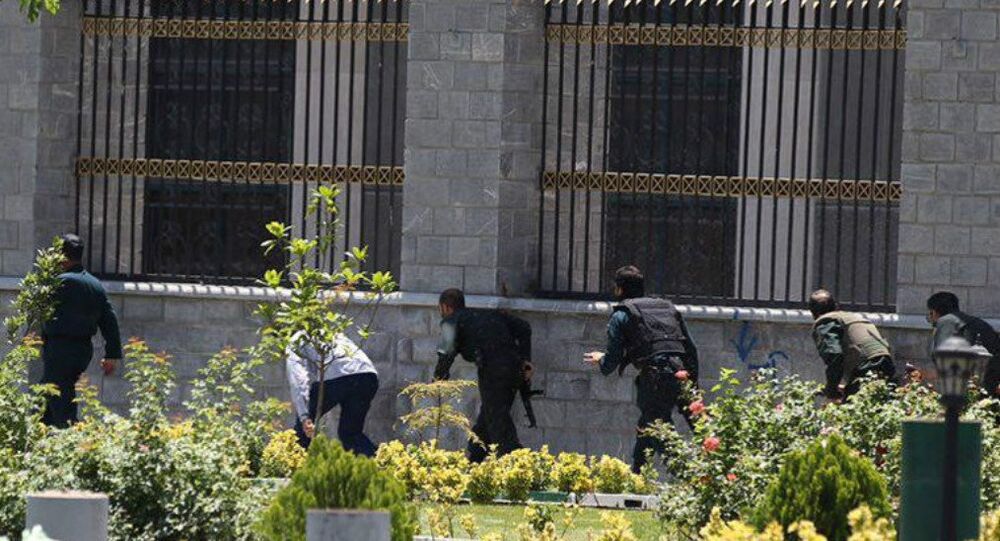 A series of major shocks recently hit the Middle East, including a Saudi-Qatar diplomatic row and terrorist attacks in Iran.

© AP Photo / Ebrahim Noroozi
Tehran Terror Attacks: Iran Suffers 'Unmistakably Symbolic' Assault on Nation
On Wednesday, a group of armed men attacked the Iranian Parliament and Imam Khomeini shrine in Tehran. Four gunmen attacked the building of the Iranian Parliament on Wednesday morning. Two of them were captured and one of the attackers blew himself up inside the building.

Several attackers raided the shrine of the late founder of the Islamic Republic, Imam Khomeini, south of the Iranian capital. The attackers started shooting at the visitors of the shrine. One of the attackers detonated himself in front of a police station opposite the shrine.

According to the latest data from the Iranian Justice Ministry, 17 people were killed in the attacks and at least 39 were injured. Daesh has claimed responsibility for the attacks.

"Information from Tehran remains contradictory to some extents, including on the circumstances of the attacks and the fate of the terrorist. However, details are of a secondary importance in this situation. What is really important is the context, in which the attacks were carried out," an article in the Russian online newspaper Vzglyad read.

The attacks came two days after a crisis sparked between Qatar and its neighbors.

On June 5, Saudi Arabia, Bahrain, Egypt, the United Arab Emirates, Yemen, Libya, the Maldives and Mauritius severed diplomatic relations with Qatar. The states accused Qatar of supporting terrorist groups, particularly the Muslim Brotherhood terrorist movement, as well as of interfering in other countries' domestic affairs. Later, they were joined by another several nations.

© REUTERS / Jonathan Ernst
Trump on Iran Attack: 'States That Sponsor Terrorism Risk Falling Victim to the Evil They Promote'
Unlike the majority of Arab nations, Doha has friendly relations with Tehran, and this fact may have been one of the triggers for the crisis.
United States President Donald Trump openly backed Riyadh in its move.

"So good to see the Saudi Arabia visit with the King and 50 countries already paying off. They said they would take a hard line on funding extremism, and all reference was pointing to Qatar. Perhaps this will be the beginning of the end to the horror of terrorism!" Trump wrote on Twitter, referring to his recent trip to the Middle East.

Meanwhile, many commentators suggested that the current rise in tensions in the region is directly related to Trump’s visit. German Foreign Minister Sigmar Gabriel accused the US leader of escalating the situation and creating the risk of an arms race in the Middle East.

At the same time, Turkey openly backed Qatar. Moscow also expressed its readiness to support Doha, including in phone talks between Russian President Vladimir Putin and the Qatari emir.

© REUTERS / Stringer
Why Saudi Arabia 'Punishes' Qatar and How Doha Could Respond
Moreover, according to Vzglyad, there are some other tense situations currently evolving in the Middle East.

Among them is the risk of breaching a $21 billion contract on the delivery of 72 F-15 fighter jets to Qatar, the threat by Damascus’ allies to hit US-led coalition forces (after a coalition strike on government troops) and the operation to liberate Raqqa.

"This landscape has been further complicated by a large-scale terrorist attack in Iran. The fact that the attacks coincide with other important events gives rise to different assumptions," the article lead.

© AFP 2021 / Hossein MERSADI / FARS NEWS
Saudi Arabia Behind Deadly Attacks in Tehran - Iran's Revolutionary Guards
According to Vzglyad, one of the reasons may be Washington’s plan to resolve its economic and financial problems at the expense of some other country.

"A rise in tensions in the Middle East could be very helpful, including the possible capital flight from the region to American safe harbors and new contracts for the defense industry," the article read.

As for the terrorist attacks in Tehran, first of all, they were set to demonstrate that Iran is defenseless against terrorism and also to prompt the Iranian government to harshen its rhetoric and policy.

"Iran may react with refusing to find a compromise in the current Middle East crisis, which would only play in the hands of those who want to fire up the region," the article read.