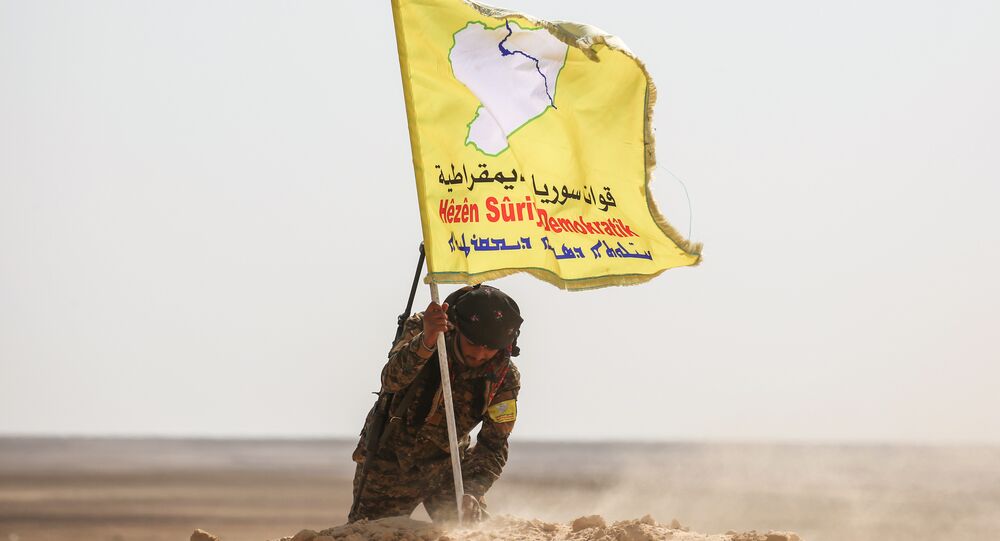 "They are fighting street battles inside Raqqa now, and we have experience in urban warfare," she added.

In their drive for Raqqa, Kurdish forces have been initially supported by a United States-led coalition and are currently coordinating their actions with American forces. Earlier, the Pentagon deployed several marine units to the area, in addition to previously deployed 500 Special Forces troops.

"The SDF, partnered with enabling support from US and coalition forces, are the only force on the ground that can successfully seize Raqqa in the near future," Pentagon Press Secretary Sean Spicer told journalists in May.

© AP Photo / APTV
US Intelligence: Kurdish Independence Is Inevitable
SDF members insist that after the liberation of Raqqa the region will become part of the Federal Democratic System of Rojava and Northern Syria.

"Since the assault on Raqqa is carried out by the SDF, it makes sense that after its recapture, the city will become a part of the democratic federal system created by us in northern Syria," Gharib Hassou, a representative of the Syrian Kurdish Democratic Union Party (PYD) in Iraqi Kurdistan, told Sputnik.

Some media outlets reported that Washington reassured Kurds that Raqqa would be part of the federal region in northern Syria. In turn, SDF spokesman Talal Selo denied the reports.

"There were no promises from the US. We didn’t ask Washington for any guarantees on this matter. Only Syrians can decide on including Raqqa population in a self-governing regime or the federal regime we’re asking for," Selo told Sputnik.

© REUTERS / Rodi Said
Syrian Democratic Forces and Kurdish YPG Surround Raqqa as Battle With Daesh Draws Nearer
The federal region of northern Syria was declared in March in Syrian Kurdistan and neighboring regions. Damascus criticized the initiative. Moscow and Washington described the decision as premature. At the same time, Syrian Kurds said that they were ready to remain part of Syria and discuss the issue of decentralization with Damascus at the intra-Syrian talks in Geneva.

However, in late-March, Kurdish representatives announced their withdrawal from the fifth round of the talks. They claimed that the other parties ignored the Kurdish issue and did not want to discuss the status of Kurdish territories.

"We cannot ignore this problem and insist on a broader dialogue. We believe that our further involvement in this round of the negotiations is useless. We’re pulling out from the talks," Kurdish representatives said.

At the talks, tensions emerged between Syrian Kurds and representatives of the Arab opposition who opposed placing the Kurdish territorial status issue on the agenda.

© AP Photo
Russia Paying Special Attention to Kurdish Issue - Lavrov
There are several groups within the Arab opposition based outside Syria, including in Riyadh, Cairo and Moscow. Only the groups based in Cairo and Moscow want dialogue with Kurds. However, as the most powerful opposition group, this is the Riyadh-based group that sets a tone to the negotiations.

As a result, Kurds have no option but to talks to foreign players, first and foremost the United States, bypassing the opposition and Damascus.

There have been numerous reports that Washington makes regular offers to Kurds in exchange for their combat involvement in the liberation of Raqqa. Recently, a Kurdish autonomy promised by Washington has been reported for the second time. Initially, it was reported by Several Kurdish media outlets back in March. It was suggested that a Kurdish autonomy in northern Syria would be the first step in the creation of a sovereign Kurdish state in Syria and Iraq.

In turn, Russia has repeatedly called to involve Kurds in the talks, warning against any behind-the-scenes decision. Russian Foreign Minister Sergei Lavrov noted that the Kurdish problem should not be ignored and needs to be resolved as soon as possible.

US, Kurdish Forces Carry Out Joint Airborne Operation Against Daesh in Raqqa