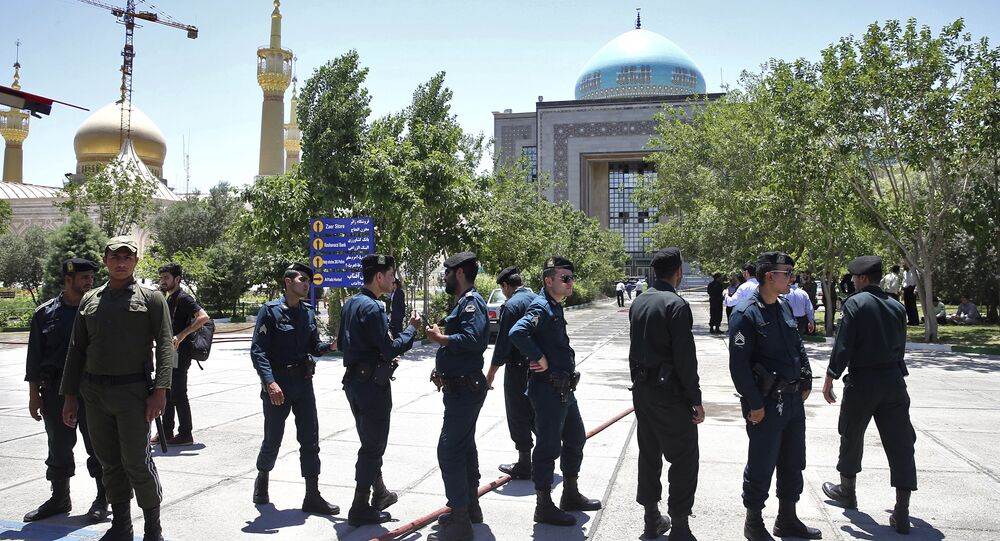 The terrorist attack that took place in Tehran on Wednesday was a well-organized attempt to undermine Iran's effectiveness at fighting against terrorism in the Middle East.

© AP Photo / Michael Probst
Tehran Allows Doha to Use Iran's Airspace Amid Flight Ban Imposed by Neighbors
On Wednesday morning, terrorists attacked the Iranian parliament and the Mausoleum of Ayatollah Khomeini, the leader of the 1979 Islamic Revolution.

At the Mausoleum of Ayatollah Khomeini, terrorists opened fire about 50 meters from the temple complex and attempted to force entry, adviser to the Iranian Foreign Ministry Hossein Sheikholeslam, a former ambassador to Syria, told Sputnik.

Sheikholeslam said that the terrorists had disguised themselves as women and forced their way into the parliament building via the visitors' entrance.

"At the moment, the situation is under control. Four people, dressed in traditional women's clothing [the chadr] went to the visitors' entrance of the parliament' administrative building, where the deputies hold their meetings."

"As soon as these four people approached the checkpoint, they immediately opened fire, wounding three of our guards and one visitor. These people then managed to break into the parliament building," Sheikholeslam explained.

© AP Photo / Ebrahim Noroozi
Syria Strongly Condemns Tehran Terror Attacks 'Backed by Well-Known Countries'
"The terrorists wanted to get to the main parliament building, where the vice-speaker of the Islamic Consultative Council, Mr. Masud Pezeshkian, was holding a meeting at that time. However, the doors of the main hall were closed, no one was allowed to leave or enter the building, and the guards were able to react immediately."

"The attack started at about 10.30 in the morning and one of the terrorists was killed right away, however the rest were still able to break into the main building, where the deputies were. At 14.40 there is a police cordon and special military response forces. They are trying to either take these terrorists alive, or kill them. There is some unconfirmed information that one of the terrorists allegedly blew himself up."

While the Daesh terrorist group has claimed responsibility for the attacks, Sheikholeslam said that it is impossible to say at this point who is behind the attack.

"Until all the terrorists have been completely incapacitated and an investigation has been carried out, we can't confirm that Daesh terrorists were behind the attacks."

"That terrorist who was captured alive has to be questioned, only then can we draw any conclusions. At the moment, we can't confirm or deny such statements. But these acts of terrorism have an unmistakably symbolic character, since they were directed against two symbols: the symbol of democracy [the legislative power of the parliament] and the symbol of the Islamic revolution –  Imam Khomeini."

© AP Photo / Office of the Iranian Supreme Leader
Pointing the Finger at Saudi? Tehran Attack First Against Iran in 35 Years
"The task is therefore to find out who is against democracy, the parliament of Iran and the Islamic Revolution and its leader. For now, we can't make any hasty conclusions, we have to wait for the investigation to be completed."

Irina Fedorova, senior analyst at the Russian Academy of Sciences' Center for Middle Eastern Studies, told Radio Sputnik that the Tehran terror attacks must have been thoroughly planned.

"Terrorist attacks in Iran occur quite often in the provinces that border Pakistan, but Tehran is quite another matter. It's the capital of Iran and it must be said that security there is very strict. If such attacks can occur, it means they were very well prepared," Fedorova said.

"The fact that Daesh has taken responsibility shows that Iran is very effective at combating Daesh groups in Syria. The effectiveness of Iran's policy in this area is precisely what has raised discontent among representations of these terrorist groups. Naturally, they want to show their strength, that they still exist, despite the fact that their influence is decreasing and becoming more limited," Fedorova said.

US Condemns Attacks in Tehran, Extends Condolences to Iranians