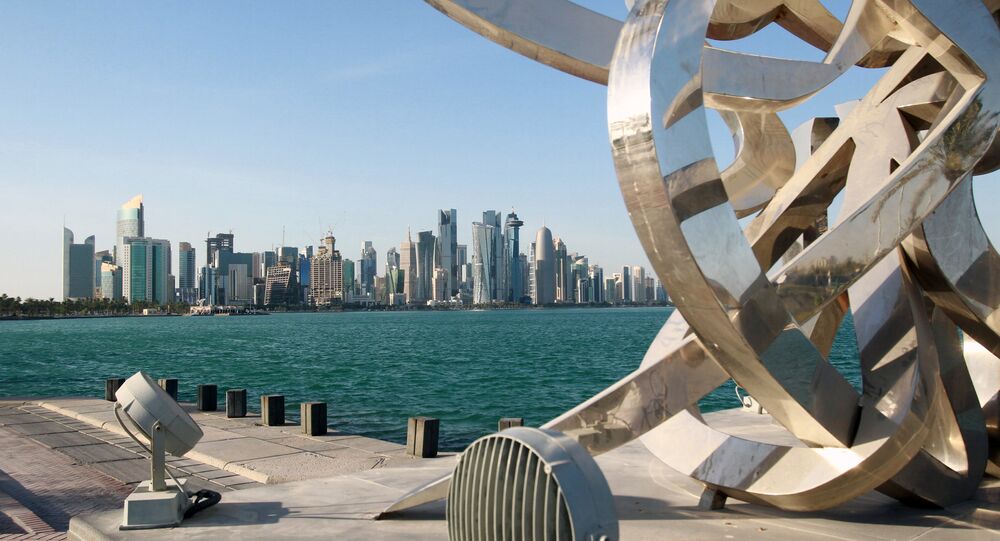 Commenting on the diplomatic row in the Middle East, where seven countries have severed their diplomatic ties with Qatar, Russian political analysts suggested that Doha could stop providing financial support to Sunni radicals in Syria, but this is still a far cry from any rapprochement with Russia, despite its much criticized closer ties to Iran.

© REUTERS / Fadi Al-Assaad
What Trump, Iran Have to Do With Diplomatic Scandal Around Qatar
Seven countries of the region, namely Bahrain, Saudi Arabia, Egypt, the United Arab Emirates, Yemen, Libya and the Maldives keep mounting their pressure on Qatar over its support of terrorism, meddling in internal affairs and growing rapprochement with Iran.

However at the summit, Saudi Arabia, on behalf of all the guests, condemned Iran for its hostile policies and threatened it with an adequate response.

Later, the official representative of the Qatari Foreign Ministry said that the agency's site was hacked, and that the speech on behalf of the emir was published by hackers and has nothing to do with the Qatari leader.

© AFP 2021 / KHALED AL-SAYYED
Next Step - Invasion? Why Saudi Arabia Moved to Cut Ties With Qatar
Alexander Filonik, the head of the Center for Arab and Islamic Studies in the Institute of Oriental Studies at the Russian Academy of Sciences, has commented to Sputnik on the regional diplomatic row. He said that the emirate enjoys a double reputation in the Middle East as it has set against itself all other regional countries.

Throughout last decades, the political analyst said, Qatari authorities have been supporting Sunni Islamists from the Muslim Brotherhood.

However Qatar's latest rapprochement with Iran has potentially expanded the spectrum of its support: it now also supports the Shia groups. The move therefore fundamentally changes the geopolitical landscape in the region.

© AFP 2021 / BEHROUZ MEHRI
Iran Set to Export Food to Qatar After Gulf States Cut Ties With Doha
Meanwhile Alexei Makarkin, an analyst and deputy director at the Center for Political Technologies in Moscow told Sputnik that such Qatar's U-turn towards Iran has caused extreme rejection in the Sunni society.

"Saudi Arabia is fighting against Iran on two fronts – in Syria and Yemen. In both cases Qatar formally supports Riyadh.  However its covert rapprochement with Tehran has caused suspicions of a double game.  And there was an immediate reaction," the political analyst said.

He especially noted that Bahrain, which was the first country to cut off its diplomatic ties with Qatar, has special grounds for concern.

"In this Kingdom, the Sunni minority which is currently in power, is trying to restrain the Shia majority, which is being supported by Iran. During the so-called Arab Spring, Bahrain was in the middle of religious clashes. Qatar's U-turn towards Iran could drastically alter the internal balance in this very country," Makarkin said.

Saudi Arabia, he said, also has every ground for concern. Back in 2011, there was Shia unrest in the country. The communities of this religious minority are residing in the Eastern province of the country, the site of major oil supplies of Riyadh.

However Makarkin suggests that Qatar's turn towards Iran and the Shiite is just an "attempt of diversification of its foreign policy ties" and links this geopolitical zigzag with the personality of Qatar's new Emir Tamim bin Hamad Al Thani.

Meanwhile, Saudi Arabia is trying to force Doha to abandon its alliance with Tehran. Under the influence of Saudi Arabia, the Libyan government, which controls the east of the country and where General Khalifa Haftar plays a key role, has also broken its ties with Qatar.

Makarkin also noted that it was no coincidence that the radical anti-Qatari campaign started right after the historic trip of Donald Trump to Saudi Arabia and their record high military agreement aimed at "containment of Iran."

Washington, he said, tries to enclothe its confrontation with Tehran into a project of the so-called 'Sunni NATO' or NATO of the Persian Gulf, a coalition of the Sunni states against Shiites.

Feeling such Trump's support, Riyadh has decided to usher its neighbor to submission, he said.

"It is only natural that the broken conflict is now being fuelled by traditional rivalry of the two neighbors. Faithful to its alliance with the Muslim Brotherhood, the Qatari are supporting the group of Misrata-based militias, while Riyadh is betting on rival General Khalifa Haftar.

In Syria, Saudi Arabia and Qatar are also supporting different Islamist groups.  The information policy of Qatari Al Jazeera, which provides ground to the critics of Saudi royal family also adds to the mutual annoyance. Riyadh responds with the accusations of Qatar's support of terrorism.

Meanwhile the Russian authorities said that Moscow is interested in maintaining good relations with all countries in the Middle Eastern region.

Alexei Makarkin  therefore suggested that the conflict with Saudi Arabia might force Qatar to cut its financial support of the Sunni radicals in Syria, but this is still a far cry from any rapprochement with Russia, despite its much criticized closer ties to Iran.

"Each country is independent and free. But this freedom does not mean cooperation with Iran, incitement to hatred between the Muslims and Christians in Egypt and the right to call revolutions in Egypt a coup," he told Sputnik Arabic.

It also does not mean the support of the Muslim Brotherhood, any ties with Daesh and even Israel, he added.  The Middle Eastern countries have long endured Qatar, but now the choice is either the change in the policies of Qatar, or the change of its leadership, he finally stated.