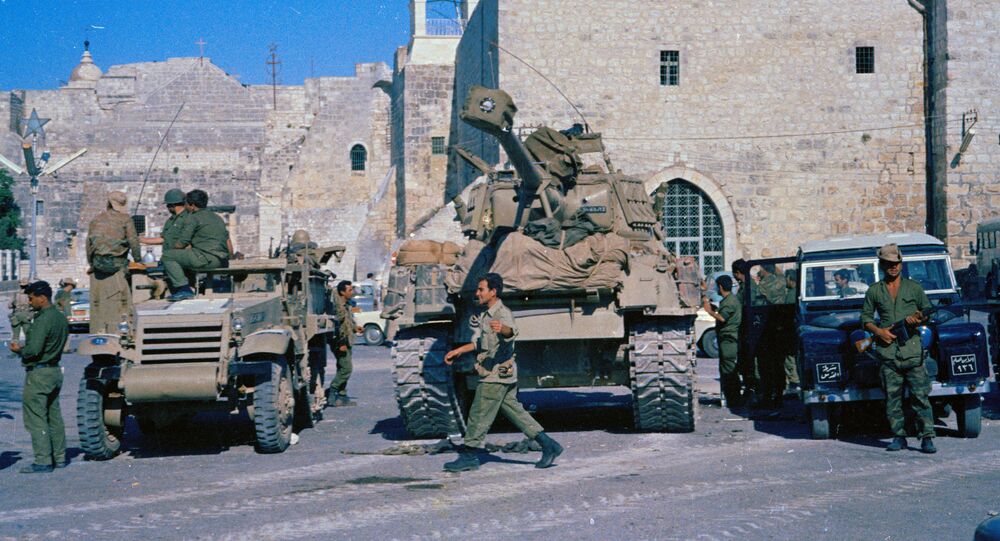 June 5 marks the 50th anniversary of the start of the Six-Day War between Israel and the Arab nations, which ended with the Israeli occupation of Palestinian territory. Palestinian Ambassador to Uruguay Walim Abdel Rahim believes that so long as the Palestinian-Israeli conflict remains unresolved, there can be no lasting peace in the Middle East.

On June 5, 1967, Israel attacked three of its Arab neighbors, having destroying the Egyptian air force in preemptive strikes following a long buildup of regional tensions.

Left without air support, the armies of Egypt, Syria and Jordan suffered a series of humiliating defeats. The war ended five days after it began, with Israeli seizing several Arab territories beyond the UN-provided borders established in 1947; these included the West Bank, the Golan Heights, the Gaza Strip and the Sinai Peninsula. Tel Aviv would eventually return the Sinai Peninsula to Egypt after the 1973 Arab-Israeli War, but continues its occupation of the other territories.

© AP Photo / Dmitry Lovetsky
Renewal of Direct Israeli-Palestinian Talks Necessary – Russian Deputy FM
Recalling the lasting significance of the Six-Day War for Sputnik Mundo, Walim Abdel Rahim, Palestine's Ambassador to Uruguay, said that this war lies at the heart of many of the conflicts plaguing the Middle East.

Characterizing the war as an open act of aggression against the Arab states, Rahim noted that it was a "catastrophe for the Arab world, for whom the Israeli occupation became a real disaster." At the same time, the diplomat said that the Six-Day war was the start of a new historical stage, "a time of awakening – the beginning of the Palestinian revolution, in the name of redeeming our dignity, which had been trampled."

When the war began, Rahim and his family were living in a refugee camp in Jordan. "Originally, my parents lived in Jaffa, home to the most delicious oranges on earth. My family sold them abroad. In 1948, they were forced to leave their homeland due to roving Zionist gangs. I was born after that in a tent of a refugee camp in Jordan. It was there that I grew up, got an education and began the struggle, which today for me continues in the area of diplomacy and politics."

© REUTERS / Ariel Schalit/Pool
Love is Gone? Israeli PM 'Disappointed' Over Trump's Decision to Keep US Embassy in Tel Aviv
The diplomat said that he could remember clearly "how in 1948, when attempts were being made to erase Palestine from the international agenda, the United Nations Relief and Works Agency for Palestine sent us food and clothing. On bags of rice and sugar, there was an image of two waving hands. People sewed shorts for their children from these bags…"

"And then someone would ask: How can it be so? They send us food to save the refugees, but at the same time they send Israel the most sophisticated weapons to kill us? These images remain in my mind even today. On the other hand, this gave us an incentive to fight for a just cause. This is the cause of the Palestinians –the hope of the Palestinian people, their desire to live as an independent state, to live in peace."

A great deal of progress has been made in this direction, Rahim stressed. "I think that our foreign policy has provided us with international support and the solidarity of other states, because it is a policy objectively aimed at establishing peace. Today, Israel faces strong international pressure. The UN General Assembly has adopted a number of resolutions on this matter. The Security Council resolution from December 2016, which was not vetoed by the US for the first time in history, is noteworthy. It is very important."

© AP Photo / Oded Balilty
Syrian Crisis: A Step Towards Peace With Israel?
The diplomat noted that today, lawmakers in many countries around the world are thinking about how to end the Israeli occupation, with the consensus growing that the two state formula – of Israel and a Palestine that is independent and sovereign, is the only solution. "We cannot accept a single Israeli soldier on Palestinian land: these are two independent states in accordance with international law," Rahim stressed.

Today, Rahim said, the international community is demanding that Israel end the occupation which began following the Six-Day War. "UN Resolution 242 of 1967, which requires Israel to withdraw from the occupied territories, also reaffirms the right of Palestinian refugees to return to their communities." Unfortunately, the diplomat noted, Israel itself does not respect any UN resolution with regard to themselves except those of their own creation.

Asked whether US President Donald Trump, who met both Israeli and Palestinian leaders last month, might help establish mutual understanding between the two sides, the diplomat said that he remained hopeful.

"I think Mr. Trump wants to do something. Hosting the Palestinian president in the White House is a good sign, whatever [Israeli Prime Minister Benjamin] Netanyahu might think about it. Trump's visit to Palestine was another good sign. Furthermore, during his visit to Israel, Trump made several important gestures. When he visited holy sites such as the Wailing Wall, he did not agree to have Netanyahu accompany him. Perhaps because this took place on occupied Palestinian land. That's one view."

Ultimately, Rahim noted that "we believe that Mr. Trump really wants to do something. Hopefully we can say that this is the case. As our president told him, 'We are here with you to help solve this problem.' The only way to do so is to end the occupation, create a Palestinian state, adhering to the 'two states' formula, and have the freedom and security for all. These are our claims. Without solving the Palestinian problem, there can be no peace in the Middle East."

Palestine has the recognition of over 130 UN member states, including Russia, and has been accepted to the UN as a 'non-member state'. The United States, Canada and Mexico, most of Western Europe, Japan, South Korea, Australia New Zealand, and a handful of other countries have yet to recognize Palestine.