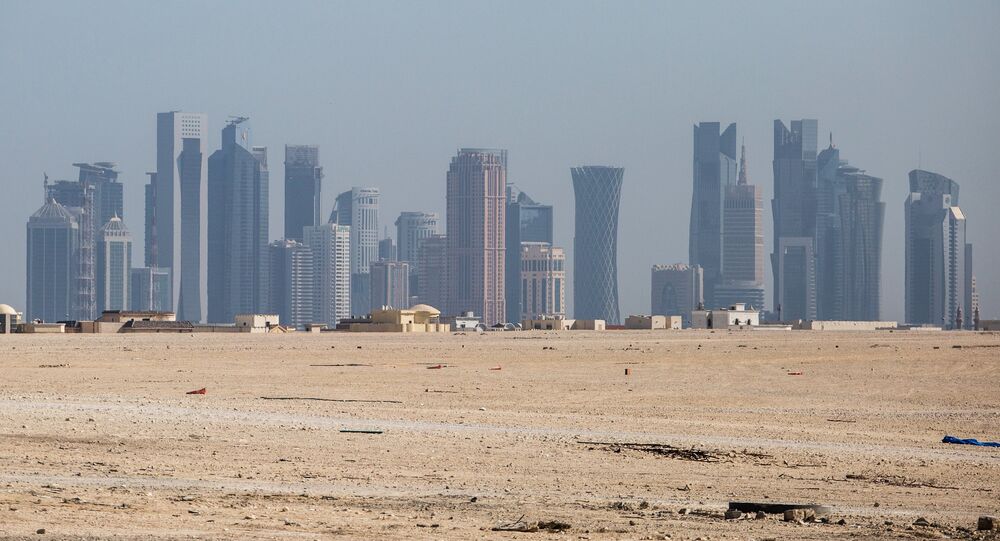 A summary of what has happened in the course of the Qatar-related diplomatic crisis so far.

MOSCOW (Sputnik) — A diplomatic scandal broke out in the Arab world on Monday, with four regional states, Bahrain, Saudi Arabia, Egypt and the United Arab Emirates, severing diplomatic ties with Qatar over its support of terrorism and meddling in internal affairs, which was followed by other states.

© Sputnik / Irina Ryapolova
The Maldives' Gov't Explains Why It Severs Diplomatic Relations With Qatar
At the summit, Saudi Arabia, on behalf of all the guests, condemned Iran for its hostile policies and threatened it with an adequate response. Later, the official representative of the Qatari Foreign Ministry said that the agency's site was hacked, and that the speech on behalf of the emir was published by hackers and has nothing to do with the Qatari leader.

Bahrain was the first country to cut off diplomatic ties due to Qatar's persistent attempts to destabilize the situation in the country and supporting terrorist activities.

"Due to the insistence of the State of Qatar in further destabilizing security and stability in the Kingdom of Bahrain and interference in its affairs, continuing the escalation and incitement of media and supporting armed terrorist activities… the Kingdom of Bahrain announces the severance of diplomatic relations with the State of Qatar," the statement published by the Bahrain News Agency read.

© CC BY 2.0 / Francisco Anzola / Doha skyline
Qatar 'Far Less Dangerous Than Saudi Arabia' Despite Riyadh-Led Terror Sanctions
Bahrain gave Qatari diplomats 48 hours to leave the territory of the kingdom. In addition, Manama suspended air and sea communication with Doha and banned citizens of Qatar from visiting Bahrain, and prohibited its own citizens from living in or visiting Qatar.

Saudi Arabia ordered all Qatari nationals to leave its territory within the next two weeks and banned all Qataris from entering the country with the exception of pilgrims allowed to visit the country for religious purposes.

"Unfortunately, all Qatari citizens are prohibited from visiting Saudi Arabia and from transiting through the country due to the security concerns. The residents and people, who are temporarily on the territory of Saudi Arabia, have 14 days to leave the country," the government's statement read, as quoted by the Saudi Press Agency (SPA).

The government of Saudi Arabia also begun the process of cancellation of broadcasting licenses of the Qatari Al Jazeera channel and closing its offices in the country.

The UAE explained its decision to cut off diplomatic relations with Qatar because of its support for the radical Islamist movement of the Muslim Brotherhood.

"The UAE took these decisive measures in connection with… the continued support and financing and harboring of terrorist, extremist and sectarian groups led by the Muslim Brotherhood," the UAE government said in a statement quoted by the Emirates News Agency (WAM).

The same reason, as well as Doha's hostility toward Egypt, was cited by Cairo.

"The Government of the Arab Republic of Egypt decided to sever diplomatic relations with Qatar because of the continuing hostility by the Qatari authorities toward Egypt and the failure of all attempts to persuade them to end support for terrorist organizations led by the Muslim Brotherhood," the Egyptian Foreign Ministry said.

The move was additionally supported by Yemen, which accused Doha of supporting Shiite Houthi rebels and other radical groups, and Libya, which considered Qatar to be "the main source of arms supplies to the Libyan branch of the Muslim Brotherhood organization and other Islamist armed groups since 2012", as well as the Maldives.

Moreover, Qatari participation in the Arab coalition was suspended.

"We regret the decision to sever relations… These measures are unjustified, they are based on assertions without foundation," the ministry said in a statement broadcast by Al Jazeera.

The ministry also rejected the Arab Gulf states' accusations of its interference in other countries' domestic affairs.

"The State of Qatar is an active member of the Cooperation Council for the Arab States of the Gulf [GCC], respects its charter, respects the sovereignty of other states and does not interfere in their internal affairs, and also fulfills its obligations to combat terrorism and extremism," the ministry said.

Commenting on the issue, Russian Foreign Minister Sergei Lavrov said the decision to break off diplomatic ties with Qatar was the Arab states' "own business", adding that Russia was interested in maintaining friendly relations with everyone in the region.

"We are convinced that any divisions can take place. We were never happy over the difficulties that arose in relations of other countries. We are interested in maintaining friendly relations with everyone, especially in the region where concentration of all efforts of fighting a joint threat, a threat of international terrorism, is a priority," Lavrov told a press conference.

Kremlin spokesman Dmitry Peskov said that Russia advocated in favor of a peaceful and stable Persian Gulf but could not interfere in their domestic affairs.

"We cannot interfere in the internal affairs of other states, in this case the states of the Persian Gulf," Peskov told reporters.

The spokesman also expressed hope that that the diplomatic row would not affect the resolve to combat terrorism.

"Of course we will carefully study all the information that, as claimed by Egypt, Saudi Arabia and the countries that have joined them, indicates that Qatar supports international terrorism," Ozerov said.

He reiterated Moscow's independence in developing its policy toward diplomatic relations with Qatar.

As regards an oil production cut deal signed by members of the Organization of the Petroleum Exporting Countries (OPEC), which Qatar is part of, Russian Permanent Representative to the International Organizations in Vienna Vladimir Voronkov told Sputnik that the diplomatic crisis would not effect the oil agreement.

"This document has an economic rather than a political focus, so I do not think that this will have any significant impact on the implementation of the agreement," Voronkov said.

Commenting on the issue, US Secretary of State Rex Tillerson called on the Gulf countries to address their differences.

"We certainly would encourage the parties to sit down together and address these differences. If there is any role that we can play in terms of helping them address those, we think it is important that the GCC [Gulf Cooperation Council] remain unified," Tillerson said, in televised remarks from Sydney.