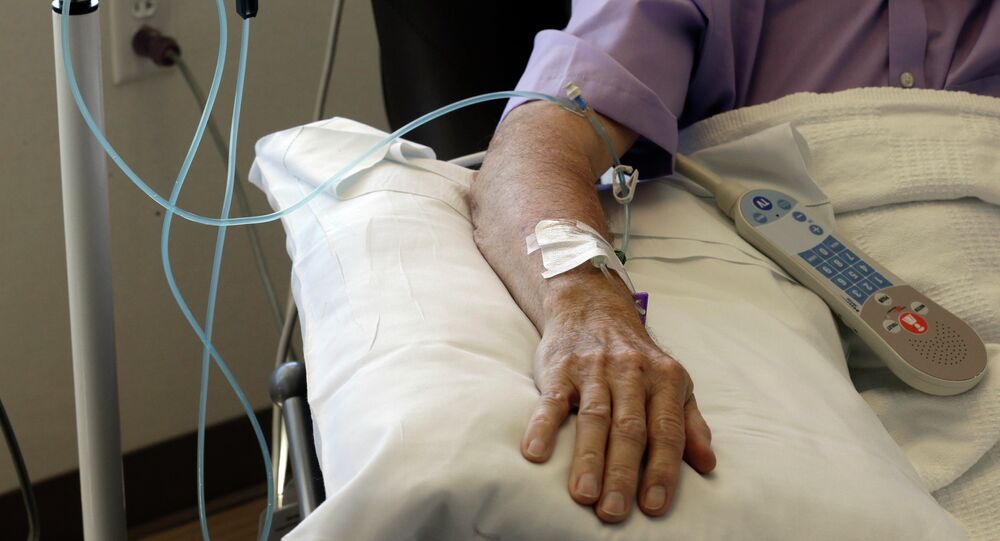 Cancer patients in Syria have to survive without receiving treatment and medicines because of the West-imposed restrictions.

DAMASCUS (Sputnik) — The war in Syria hit hard the families of cancer patients who are suffering because of the lack of pharmaceuticals caused by the Western sanctions, a Sputnik correspondent reported.

A number of sanctions have been imposed on Syria since the beginning of the conflict in the country, as a way to put pressure on the authorities. On May 29, the European Union extended sanctions on the Syrian government until June 2018.

© Sputnik / Varvara Gert'e
Over 164,000 Suffering From Cancer Need Special Treatment in Sanctions-Hit Syria
According to the Council of the European Union, the sanctions currently include an oil embargo, restrictions on some investments and on exports of certain equipment and technology to Syria that may be used for "internal repression."

Late Russian humanitarian activist Elizaveta Glinka learned about the lack of pharmaceuticals in Syria during her 2016 visit to the city of Latakia and organized a campaign to help.

Natalya Avilova, the head of projects to help Syria and Ukraine within the charity founded by Glinka, told Sputnik that what Glinka's Spravedlivaya Pomoshch (Fair Aid) and Russian Humanitarian Mission charity could do to help Syrian hospitals was "a drop in the ocean."

"I think it is monstrous and absolutely unacceptable to have pharmaceuticals and medicines that are vitally important to children under sanctions… The issue of these medicaments being crucial for the lives of children must be raised at the highest level internationally, in the United Nations, maybe in the World Health Organization or in the UN Human Rights Council," Avilova told Sputnik.

The activist said that only 15-20 types of pharmaceuticals could be brought from Russia, while the patients in Syria needed hundreds more.

In 2015, almost all foreign suppliers of medicaments refused to work in Syria because of the sanctions, which forbade interaction with the country's government, according to Munir Othman, the head of the Tishreen hospital in the city of Latakia.

"We were left without the majority of the necessary medications. Even the deliveries of those pharmaceutical drugs that may be ensured via friendly states were delayed because there is no aviation, [drugs] have to be imported through the neighbor state and from there on, by land transport. They [The West] say there are no restrictions on medications, while, in reality, there are many obstacles to the delivery of the necessary medicaments and big difficulties with the delivery, this suggests an actual blockade," Othman said.

The hospital director mentioned Glinka's assistance and noted several other ways in which Russia had tried to help.

"Russia has offered to help in various ways, including training of the staff and helping to prepare a number of children that need bone marrow transplant to move them to Russia to conduct the surgery there," Othman said.

The Tishreen hospitals' oncological department is the second most significant in Syria after Al Biruni hospital in Damascus. The hospital in Latakia, however, has to treat more patients because Al Biruni is located in an area prone to conflict flare-ups. Most cancer patients from across Syria come to Tishreen. According to the director, the hospital needs over 200 types of cancer medications.

Last week, Deputy Health Minister Habib Abboud also spoke to Sputnik about the problems with the deliveries of pharmaceuticals.

"Syria has suggested signing an agreement on cooperation and recognition in the sphere of pharmaceuticals' tracking and import and is now waiting for the Russian side to sign," Abboud said.

The deputy minister also stressed that the problems with the deliveries especially affected cancer patients.

Maria, a young doctor who was born in the Russian city of Khabarovsk and spent her whole life in Syria, told Sputnik that almost all of the cancer-related pharmaceuticals were under sanctions.

"Almost all medicines to treat cancer and post-treatment ones are under sanctions… In the province of Latakia alone, 500-600 children are sick. In most cases, it is leukemia or lymphoma, and this is only among the cases that we know about, many simply have no opportunity to reach out [for treatment]," Maria told Sputnik.

The doctor said that the hospital asked Avilova and Russian peacemaking missions for help and they always helped as much as they could.

"The problem is that Russia is also under sanctions, so it is difficult to find and bring pharmaceuticals even for them… Unfortunately, Russia is the only one helping us. Earlier, Iran was also supplying us with medicines, but lately there have not been many [deliveries]," the doctor said.

Girl From Aleppo Saved in Moscow

While Russia and Syria continue talks on cooperation and delivery, the Russian Center for reconciliation and two Russian charities managed to save a 10-month old girl, Maria, who was brought to Russia for eye cancer treatment.

© AFP 2020 / STR
Syrian One-Year-Old in Good Condition After Eye Cancer Chemotherapy in Russia
The girl was being treated in Damascus, but given the lack of necessary medicines, the doctors could only give the child more time.

Maria Mahmoud was transferred to Moscow after her parents reached out to the Russian Center for Syrian reconciliation for help. Russian medics successfully carried out the complex surgery on her in early March.

According to the girl's aunt who came with her to Russia, she was feeling much better and the doctors were trying to save her second eye.