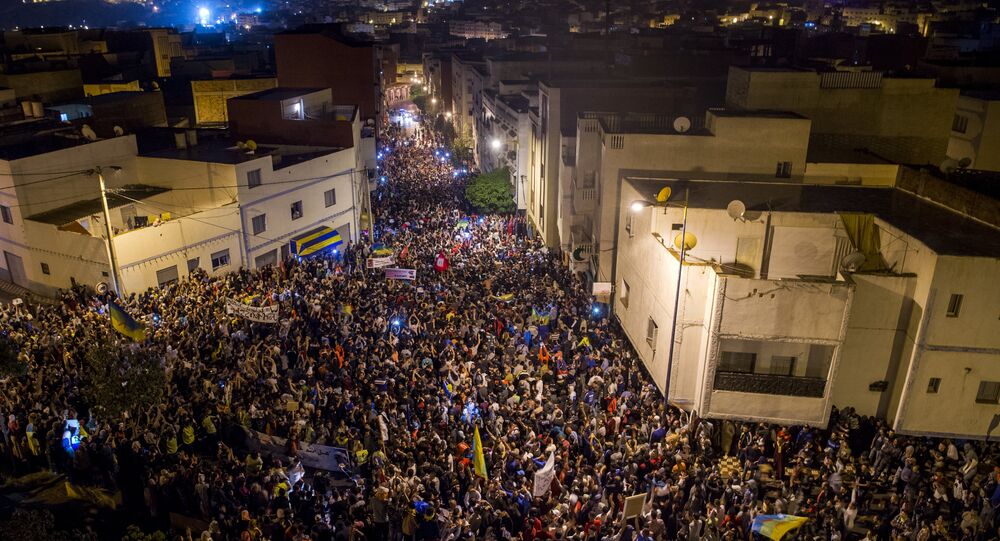 A New ‘Arab Spring’ May Erupt in This Arab Country

The ongoing protests in Morocco, which have already been compared to the events of the "Arab Spring" in 2011, could hit with renewed vigor in the summer.

© REUTERS / Ali Hashisho
Morocco Arrests 6 Daesh Suspects Allegedly Plotting Terror Attacks
The trouble began in the city of Al Hoceima in October 2016 after the death of fish merchant Muhsin Fikri. To this day the unrest continues.

Sputnik Arabic spoke with the head of the civil ‘Moroccan Movement of Conscience’ Salah al Wadia, who said that the demonstrations are getting out of control and threatening national security.

Initially, the demands that were put forward had a different, more peaceful character. Now however, the protesters demand the release of other activists that were arrested earlier.

In order to stabilize the situation, “negotiations and an attentive attitude toward the protesters are needed. We still have to fulfill the unfulfilled demands to stop the escalation of tension,” Wadia said.

Sputnik Arabic also spoke with the editor-in-chief of the Moroccan site "Voice of the North," Rashid Belzaar, who said that the situation in the city got worse on Monday after the arrest of Nasser Zefrafi, who was the so-called leader of the protest movement.

Zefrafi became famous for his speeches denouncing "corruption" and "dictatorship." He had been  on the run since Friday, after he started calling his fellow citizens to new demonstrations during the Friday prayer.

Rashid Belzaar believes that the actions of the government are responsible for this growing unrest because it did not respond to the protests in time, but waited for the increase in tension.

“The Interior Ministry by its actions is putting the country in danger,” the journalist said.

The Arab Spring was a series of anti-government protests, uprisings and armed rebellions that spread across the Middle East in early 2011. The movement originated in Tunisia in December 2010 and quickly spread to Egypt, Libya, Syria, Yemen, Bahrain, Saudi Arabia, and Jordan.

The event that triggered the movement took place in Tunisia when the self-immolation of a street vendor in a provincial town of Sidi Bouzid sparked mass anti-government protests.

Incapable of controlling the angry crowds, President Zine El Abidine Ben Ali was forced to flee the country in January 2011 after 23 years in power.

Over Dozen Detained in Morocco Over Suspected Ties to Daesh