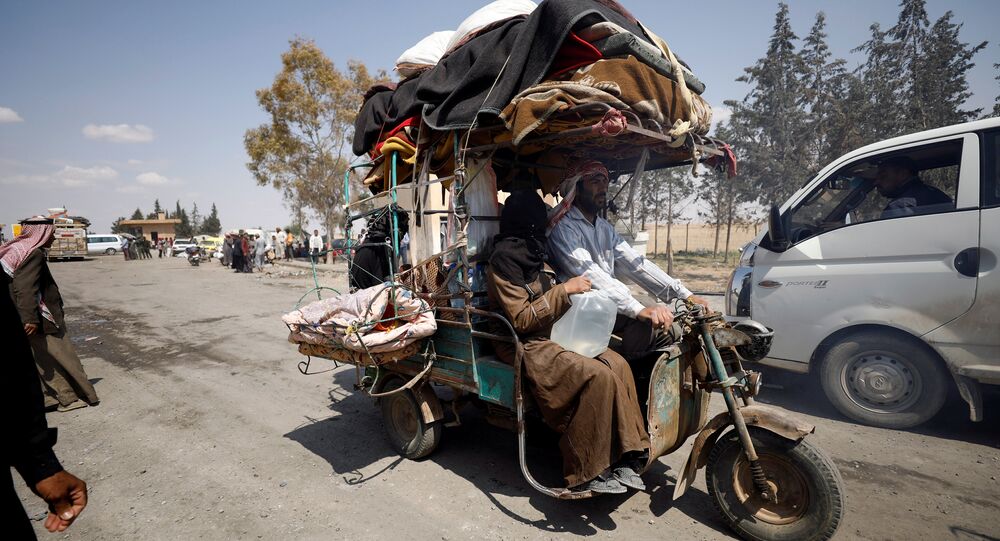 UN Emergency Relief Coordinator Stephen O'Brien aid that about 100,000 Syrians had left Raqqa since April due to poor humanitarian conditions.

© AP Photo / Senior Airman Matthew Bruch, US Air Force
US-Led Coalition to Assess Reports on Civilian Killings in Syrian Raqqa
UNITED NATIONS (Sputnik) — UN Emergency Relief Coordinator Stephen O'Brien has called on the conflicting sides in Syria to allow free access for humanitarian aid deliveries, and said that about 100,000 Syrians had left Raqqa since April due to poor humanitarian conditions and the ongoing operation to liberate the city from the Islamic State (Daesh) terrorist group.

"I call on members of this Council to use its influence to see that these actors respect humanitarian principles and allow the unfettered delivery of aid… With some 100,000 people displaced due to fighting around Raqqa since April, access is needed now through every possible modality. We need to see restrictions eased for those operating in the area. We need to see increased cross-border and cross-line access for humanitarian assistance into the area," O'Brien said addressing the UN Security Council meeting on Tuesday.

According to O'Brien, in April and May, the United Nations has managed to provide over 266,000 Syrians with humanitarian aid, out of one million "requested under the bi-monthly plan."

Syrian army as well as numerous armed groups, such as the Kurdish-led Syrian Democratic Forces (SDF) have been fighting against Daesh that had occupied vast territories of the Middle Eastern country, including Raqqa. The SDF are currently conducting the Wrath of Euphrates operation aimed at liberation of the de-facto capital of the self-proclaimed Daesh caliphate.