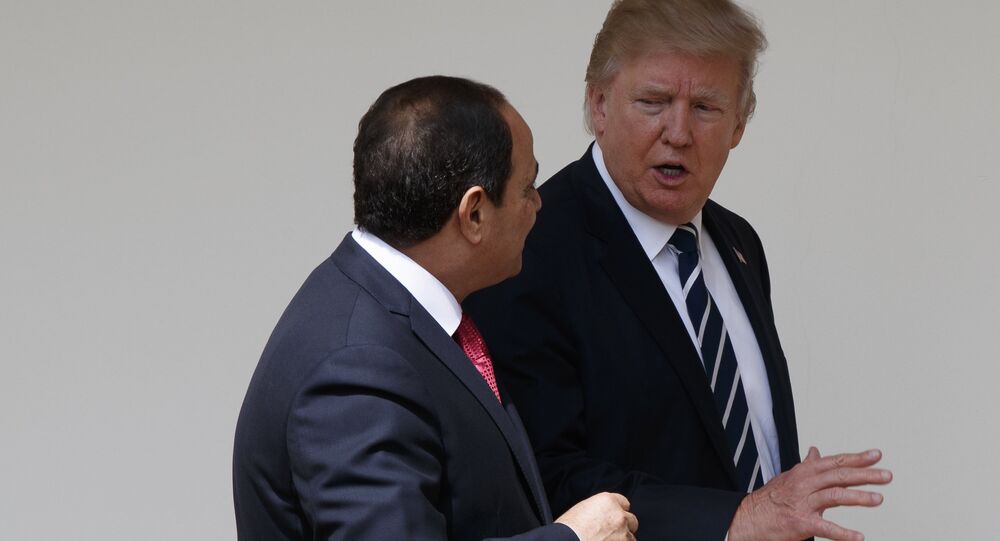 Egypt "is going to join" the Middle Eastern military alliance, informally known as Arab NATO, if it is created, Egyptian lawmaker Ahmed Ismail, a member of the parliamentary National Security and Defense Council, told Sputnik Persian.

United States President Donald Trump appeared to have indirectly mentioned the bloc while on a visit to Saudi Arabia during a key speech.

"Our goal is a coalition of nations who share the aim of stamping out extremism and providing our children a hopeful future that does honor to God," Trump said during his first overseas visit. "We have also started discussions with many of the countries present today on strengthening partnerships, and forming new ones, to advance security and stability across the Middle East and beyond."

The issue is said to have also been on the agenda of Trump's meetings with leaders of Egypt, Bahrain, Qatar and Kuwait.

© REUTERS / Jonathan Ernst
Trump's Mideast Tour Paves the Way for War With Iran, Ex-CIA Official Warns
Earlier this year, reports emerged indicating that the Trump administration was in talks with its key allies in the Middle East, including Egypt, Jordan, Saudi Arabia and the United Arab Emirates, to create a regional military alliance to ostensibly counter Iran's influence.

The new coalition is expected to adopt a collective response clause, mimicking NATO's Article 5. The bloc, if established, would also share intelligence with Israel. However, neither Washington, nor Tel Aviv would become a formal member.

Ahmed Ismail emphasized that although Cairo is interested in being a part of the new organization, it would be against using the bloc's forces in Syria.

"President Abdel Fattah al-Sisi and the Egyptian state have reiterated that the Syrian crisis must be resolved through peaceful, non-military means," the lawmaker said. "Egypt's main role is to restore the balance of power in the Middle East and protect the Gulf nations from outside threats. At the same time, Cairo does not trust what Americans say," he added.