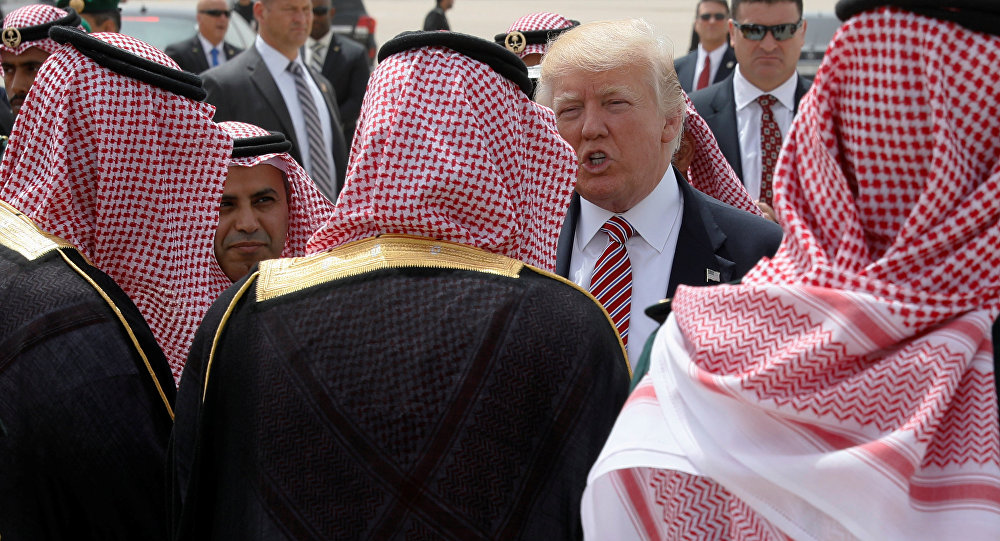 On May 20, US President Donald Trump and King Salman of Saudi Arabia inked the largest single arms sales deal in United States history, worth a staggering US$350 billion. It marks a continuation of the longstanding and cosy relationship between the two countries, a coupling many consider toxic for both the US and the wider world.

The announcement ended Trump's whirlwind tour of the Kingdom, his first overseas visit as sitting President. The deal is to be implemented over the course of a decade, with contracts worth US$110 billion taking immediate effect. It may be Trump agreed to the mammoth transaction in order to smooth Saudi feathers ruffled by the Justice Against Sponsors of Terrorism Act, which allows relatives of 9/11 victims to sue the Kingdom for its alleged role in the 9/11 attack. Then-President Barack Obama vetoed the law, but was himself overruled by Congress — Trump supported the law and called Obama's veto "shameful," suggesting it would go down as one "of the low points of [Obama's] presidency."

While the figures are whopping, Saudi Arabia has long been the US' largest foreign military sales customer, with US$60 billion worth of hardware sold in 2011 alone. Still, the deal has already proved highly controversy, as Saudi Arabia is the creator and cradle of Wahhabi Islam, the ideological progenitor of modern Islamist extremism. In a 2010 memo released by WikiLeaks, then Secretary of State Hillary Clinton dubbed the Kingdom "the most significant source of funding to Sunni terrorist groups worldwide."

Even Israel, arguably the US' closest ally, has expressed disquiet at the scale of the deal, with Energy Minister Yuval Steinitz saying the matter "should really trouble us." While Israel and Saudi Arabia share a common regional enemy in Iran, Israel has long fought to maintain a significant defense edge over its neighboring states.

The true nature of the Saudi regime has long been well understood by Western elites. In June 1963, then British ambassador to the KSA, Sir Colin Crowe, summed the country up in no uncertain terms.

"[Saudi Arabia] is ruled by a royal family whose extravagance is only rivaled by its numbers. It has no modern code of laws and its criminal justice is of medieval barbarity. There is not even a pretence of democratic institutions, and though slavery has been abolished slaves are still to be found. Corruption is widespread. The country sits on top of some of the richest oil resources in the world and enjoys a vast unearned income which has dissipated in pleasure, palaces and Cadillacs."

Why is the United States, the self-avowed global exporter of liberal democracy, allied with the most oppressive dictatorship in the Middle East? The US State Department website is surprisingly candid in answering this question.

"Saudi Arabia's unique role in the Arab and Islamic worlds, its possession of the world's largest reserves of oil, and its strategic location all play a role in the long-standing bilateral relationship between the Kingdom and the United States."

Wilbur Ross touts the lack of protests in Saudi Arabia during Trump's visit (maybe it's because protesters are jailed & sometimes beheaded?)

​In all, the Kingdom floods the US with over one million barrels every day. Such is the US' dependence on Saudi oil, the country is committed to not only defending the Kingdom from external threats, but internal ones. In October 1981, Ronald Reagan pledged to use US military might to safeguard the royals from any internal pressures towards democracy. Between then and 2000, $8 trillion was spent protecting the Gulf monarchies.

Trump attacked: 1. BO for bowing, so did Trump; 2. MO not wearing veil, neither did Melania; 3. Clinton Fndtn getting Saudi $, so did Ivanka

​So keen is the US to insulate Saudi Arabia from criticism of its repressive internal policies, it has helped land Saudi Arabia seats on the United Nations Human Rights and Women's Rights Commissions. Both moves beggared belief the world over, and for good reason. The Death Penalty Worldwide Database names Saudi Arabia as having one of the highest execution rates in the world. Despite international standards only allowing for the death penalty in only the "most serious crimes," Saudi Arabia has executed people for a wide variety of nonviolent crimes, including "sorcery."

© REUTERS / Jonathan Ernst
All Talk and No Action: Trump Visit to Riyadh Appears to Achieve Little

There's an average of roughly 90 documented state executions in the country annually, amounting to a per capita execution rate of one for every 321,839 persons, compared to a rate in the US of one per 9,028,571 persons.

However, the Kingdom's disgraceful human rights record is not limited to its liberal use of the death penalty. Saudi Arabia also employs brutal punishments for speech crimes — activists have received 1,000s of lashes and prison time for "insulting Islam."

​In respect of women's rights, the World Economic Forum's Global Gender Gap report for 2016 placed the country 141 out of 144 — Saudi women are infamously banned from driving, and are forced to appoint male guardians to make all their major decisions — such as getting married, accessing healthcare, traveling abroad, working and even leaving prison. The country also employs technology to monitor the movement of women, with appointed guardians alerted should their female charges attempt to leave the country.

Enjoyed talking to the incredible women working hard @GE_Saudi service center. Great strides being made towards the empowerment of women. pic.twitter.com/bXdES83w3P

​At the time, Dr. Richard Wellings, Research Director at the Institute of Economic Affairs, called Saudi Arabia's elevation to the Women's Rights Commission "an absolute joke," and "hugely embarrassing" for the UN and the countries that voted for it.

"[The move] exposes their unsavory relationships with Saudi Arabia. These relationships are based on the huge amounts of money large corporations make from the Kingdom, not merely in arms sales, but oil and gas businesses, and also the vast amount of money the country invests in the City and Wall Street. This move is purely to do with economics, and shutting down criticism within these organizations. It affects the reputation of the UN — commissions have influence over foreign aid policies, and this could impact concrete action on the ground," Dr. Wellings previously told Sputnik.

With Western countries still highly dependent on Saudi oil and money, and the Saudis so thoroughly insulated from internal and international criticism, it's clear the US/Kingdom marriage is set to endure.