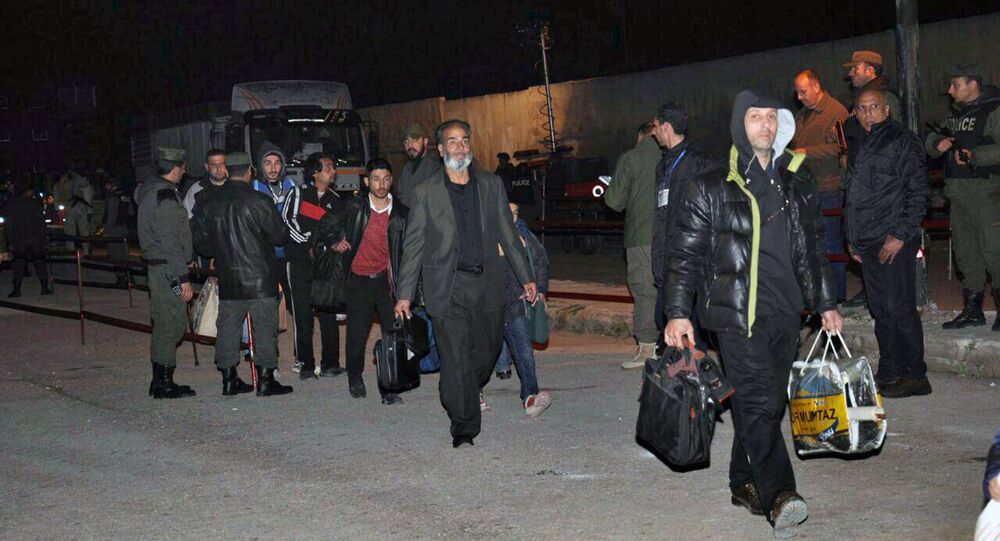 The Syrian city of Homs will be completely liberated from militants tomorrow.

HOMS (Sputnik) — The last column with the militants and their families is expected to leave the al-Waer neighborhood of the Syrian city of Homs within 24 hours, and the city will be completely liberated and brought under control of the government forces, Homs Governor Talal Barazi told Sputnik on Saturday.

"The operation started in the morning. So far, it is difficult to say when it will end. We are forming two groups: one is leaving for Idlib, the other for Jarablus. Some 700 militants and their families will leave today, a total of 2,500 people. That’s why the operation is big and demands time and coordination, some 24 hours. In any way, the al-Waer neighborhood will be completely liberated from the militants tomorrow," Barazi said.

© REUTERS / Omar Sanadiki
Belgian MP Denounces Sanctions After Seeing 'Russia Feeding the Hungry' in Aleppo
The governor noted that the militants were leaving under supervision of the Russian military police, officers of the Syrian Interior Ministry and representatives of the Red Crescent.

This is the 11th and the last stage of the withdrawal of militants and their families from Homs under the deal with the Syrian government. A total of 17,000 people have left al-Waer during the previous stages, including some 3,500 militants.

"As of now, 450 people, including 193 militants, with 122 among them armed, have left [Homs]. The final stage may not finish today and will continue through Sunday," a Syrian police officer told Sputnik.