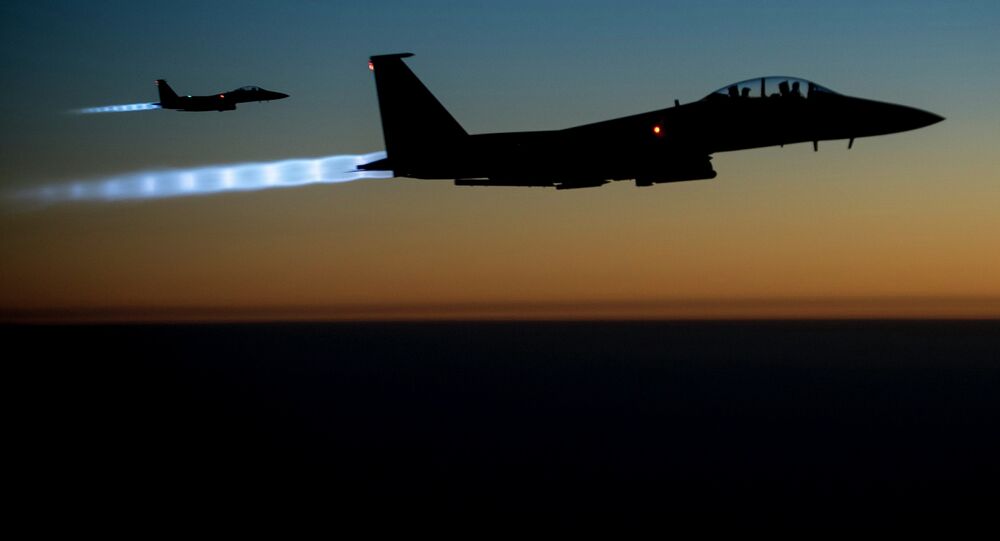 Asked to comment on US coalition forces' attack on a Syrian pro-government militia convoy in southern Syria, respected Russian military analyst Igor Korotchenko said that the attack made absolutely no sense from a military standpoint, and would only serve to hinder the Syrian peace process.

On Thursday, US-led coalition forces' launched an airstrike on Syrian pro-government forces near the town of Al-Tanf in southern Syria.

The Pentagon claimed that the strikes were an act of "force protection" for US Special Forces operating on the Jordanian-Syrian border. Syrian officials called them an act of aggression and state terrorism by the United States. Russian Foreign Minister Sergei Lavrov called the attack "illegitimate," "illegal" and a "gross violation of Syria's sovereignty."

According to the source, coalition aircraft began their attack at very low altitude, but return fire from the Shilka's 23-mm autocannons forced them to rapidly gain altitude, thus becoming visible to Syria's S-200 surface-to-air weapons systems based in al-Damir. This in turn led the attacking aircraft to break off their attack and flee Syrian airspace.

Speaking to Russia's RIA Novosti news agency, Igor Korotchenko, a Russian military journalist and editor-in-chief of 'National Defense', a defense-related publication, emphasized that the attack made absolutely no sense, militarily or strategically.

"There was no practical need to use military force, since the column of Syrian pro-government militia was moving along an established route and did not pose a threat to anyone," Korotchenko said. "This attack…will only hamper the political settlement process in the Syrian crisis," he added.

© AFP 2021 / ANDREJ ISAKOVIC
Moscow Says New US-Led Coalition Strike Near Syrian Al-Tanf ‘Illegitimate’
As for the Pentagon claim, repeated by the US media, that local commanders felt the convoy posed a danger to US troops in the area, this too was absolute nonsense, according to the analyst. However, it did highlight the escalating US presence in the Syrian crisis.

"It's obvious that on Jordanian territory near the Syrian border, and on the Syrian side of that border, in addition to the opposition forces sponsored by Washington, there are several groups of US special forces and military advisors from the Pentagon and the CIA. Their security, above all else, was the 'reason' the strike was carried out," Korotchenko said.

This was the second time that the Trump administration has used military force against Syrian government forces. Last month, US Navy destroyers fired 59 cruise missiles at the Ash Sha'irat Airbase in western Syria, calling their attacks a 'warning' to Damascus following a chemical weapons attack in Idlib province which Washington claimed was carried out by Syrian government forces. The world is still waiting for the US and its allies to provide any proof for its claims of Syrian government involvement in the alleged chemical attack.

No Indication of Civilian Casualties in Strikes on Syrian Forces - Pentagon

Lavrov Unaware if US Warned Russia About Airstrike Against Syrian Troops