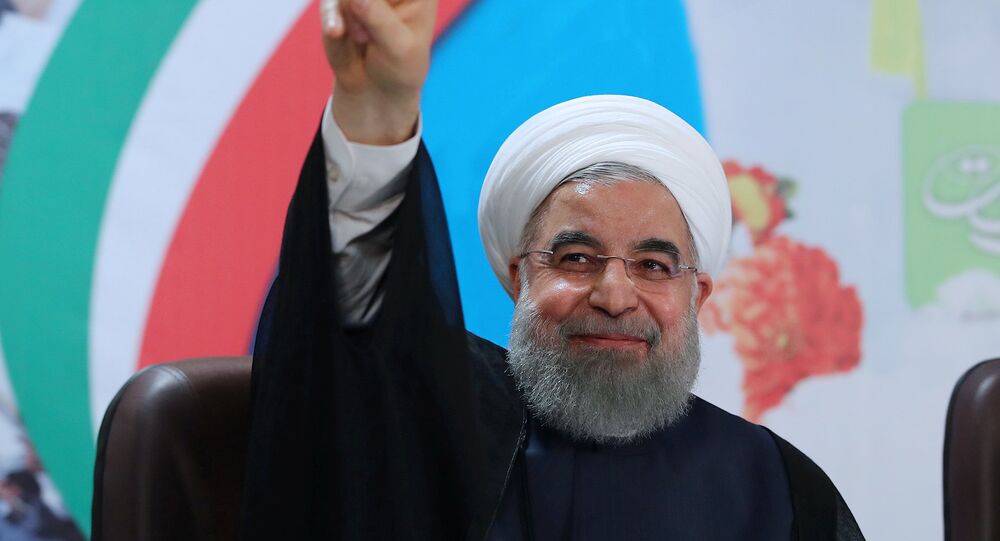 With the Iranian elections approaching, the Trump administration’s decision to waiver sanctions may aid the moderate President Hassan Rouhani in defeating his hardline opponent, and this could be exactly what Washington wants.

© AP Photo / Ronald Zak
US Renews Sanctions Waiver for Iran Under Nuclear Deal Despite Trump's Criticism
The move is seen as a significant indicator that the Trump administration harbors the intention to preserve the Obama-era nuclear deal with Tehran, while at the same time showing Iran that it won't tolerate the development of ballistic missiles.

Rex Tillerson's State Department has announced that sanctions relief on the Islamic Republic will continue so long as Iran complies by the terms of the 2015 Joint Comprehensive Plan of Action that aims to reduce Iran's stockpile of uranium. However as part of the agreement, Washington must agree to issuing periodical reviews of the Iran's complicity with the terms of the agreement.

While campaigning for the presidency, Donald Trump proclaimed that he would completely refashion the deal or even go as far as abrogating it. At one point, Trump said that he would "dismantle the disastrous deal with Iran." However since assuming the presidency, he has tempered his position, suggesting that he is studying the accord with an eye for its details, and that he is yet to reach a final position on its contents. Analysts have said that his extension of the sanctions is indicative of his tacit intention to let the deal remain.

The sanctions imposed on Iran for its ballistic missile program have targeted senior Iranian military officials in addition to an Iranian company and a network based in China that stands accused of supplying Iran with the wherewithal sufficient to produce ballistic missiles, said the US State Department.

It is very likely that Trump's tactic of keeping old sanctions at bay while imposing new ones is intended to demolish any accusation that he is softening his position on Iran. Further supporting this argument, since taking office, Trump has signed off on the sanctioning of hundreds of officials in both Iran and its ally, Syria, as part of what is most likely a strategy intended to pressure Iran into rolling back on its regional influence.

The implications of the Trump administration's decision to extend sanctions relief, will however, reverberate beyond the realm of international relations. Iran will hold is presidential election on Friday, May 19, and sees the incumbent moderate president Rouhani face off with a conservative hard-line challenger, Ebrahim Raisi.

© AP Photo / Ebrahim Noroozi
Presidential Election in Iran: Three Factors Give Rouhani Good Shot at Second Term
Many Iranians have expressed their disappointment at the fact that the economic boom they expected post-sanctions relief has not yet come, suggesting a growing impatience among the Iranian population with Rouhani's continued optimistic talk of the nuclear accords. While Rouhani will be able to point to the Trump administration's granting of continued sanctions relief as a victory of the nuclear deal that was achieved on his watch, such grandstanding may have lost the effect that it once had.

The Trump administration's wavering of the most punitive sanctions that it imposed on Iran before the deal was struck could be its way of trying to embolden the Rouhani camp. While Trump certainly views Iran with suspicion, it would much rather deal with Rouhani, who has been lauded as a "moderate" willing to deal with the West, than his conservative clerical challenger, Ebrahim Raisi.

On Wednesday, May 17, the Supreme Leader of Iran Ayatollah Khamenei announced in front of an audience, in what many interpreted as a swipe at President Rouhani, that, "in the election debates, some remarks were made that were unworthy of the Iranian nation."

Today, economic capacity of the country is a priority. So I do emphasize on reducing costs of living of people.

Concern among progressive Iranians continues to mount as Friday draws closer, especially after the Ayatollah's intervention, which some fear could swing the vote in favor of Mr. Raisi.

US Imposes Iran-Related Sanctions on Individuals, 4 Entities, Including Chinese