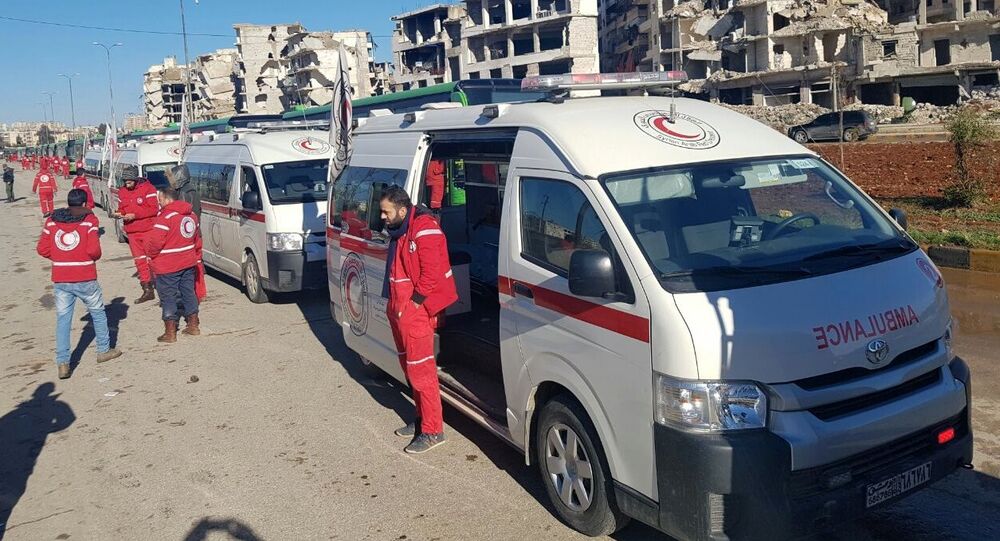 Syria has been living under Western sanctions for many years now. These sanctions concern even such an important sphere of the country as its medicine and medical supplies. Western medicines and spare parts for expensive European medical devices are not available in the country and that has a devastating effect on its civilians.

© AP Photo / Andrew Harnik
Trump Continues Sanctions Against Syrian Government - White House
A pharmaceutical plant in the suburbs of Aleppo has started its production after Sheikh Najar district was liberated from militants. The workers at the plant are seen packing tablets, along the conveyor belt medicines in bottles are seen being transported. Although production has started once again after years of being shut down, the plant is not enough to help everyone.

Despite the popular belief of war affecting the production in the country, it was not the terrorists that caused the greatest harm to this industry, it was the western sanctions.

“The sanctions of the Western countries almost killed the entire pharmaceutical industry in the country, as we cannot buy medications or ingredients for their production. Now imports only come from Russia, China, Iran and some other countries,” production director Mahmoud Abu Abed told Sputnik.

Sanctions against Syria first of all hit the ordinary people and soldiers fighting against terrorist organizations such as Daesh and al-Nusra Front.

Civilians cannot buy medications to fight cancer, diabetes and other diseases. There are not enough vaccines against poliomyelitis, anti-inflammatory and other vital pills.

“There is no insulin, you know what happens when there is no insulin: an increase in diabetes mellitus, that's what, happens to people,” pharmacist Mahmoud Makteri told Sputnik. He, like many Syrian doctors, had studied in Russia before returning to serve his country.

Before the war, Syrian pharmaceutical plants supplied 95% of the country’s medicines. Now production has fallen to less than half. Many production facilities have been destroyed or captured by militants.

© AP Photo / Hassan Ammar
Russian Servicemen Deliver Medicine, Humanitarian Aid to Syrians
Another reason for falling production was the fact that many specialists fled the country due to the war.

However, despite all the recent hardships, Syria is trying to develop its pharmacological industry. The development of new vaccines, medications and vitamins is taking place at the University of Aleppo.

“We are conducting research in the laboratory of molecular biology and are developing a cure for cancer, with practically all its components being of plant origin. They are extracted from plants growing in Syria,” post-graduate student of the Faculty of Pharmacy at the University of Aleppo, Muhammad Abu Rashid, said.

He further said that the process of training medical specialists, including pharmacists, has not stopped in Aleppo. On the contrary, the competition for admission to the local medical university has become higher now.

The university continued teaching students even during the war, despite the constant shelling. Now, that the city has been liberated from militants, a memorial to the dead students was erected on the university campus.

“I lost many friends, many of them were disabled because of their injuries,” student Omar al-Qasem said. According to him, this makes students take their education and future more seriously.

“After completing our training, we will devote our life to assisting those who had suffered from the war,” Qasem said.

However, the university greatly lacks medical supplies. Due to the sanctions, it has no opportunity to purchase modern laboratory materials.

© AFP 2021 / George OURFALIAN
ICRC Praises Russia for Aid in Syria, Evacuation of 35,000 Civilians From Aleppo
Just recently, a device that was used in analyzing the properties of medicines did not work at full capacity — a sensor that is only manufactured in the European Union had failed.

The price of this sensor is about $ 600 but it cannot be delivered because the country is under sanctions and that is despite the fact that this expensive device is still under the warranty.

“Our statements that these spare parts are needed exclusively for peaceful purposes are not accepted, as we are trying to find a way out of this situation. We are asking for help from friendly countries, primarily Russia, India and China. This equipment however, we will have to throw out,” Dean of the Faculty of Pharmacy of the University of Aleppo, Mahar Harman, told Sputnik.

Such hurdles are occurring despite the fact that it is Syria and its army that are at the forefront of the fight against terrorism.  It is not only the soldiers but also the civilians who are greatly being affected by bullets and mines.

But it looks like Syria, building on its own strength, is going to save its citizens without waiting for help from the other European countries.