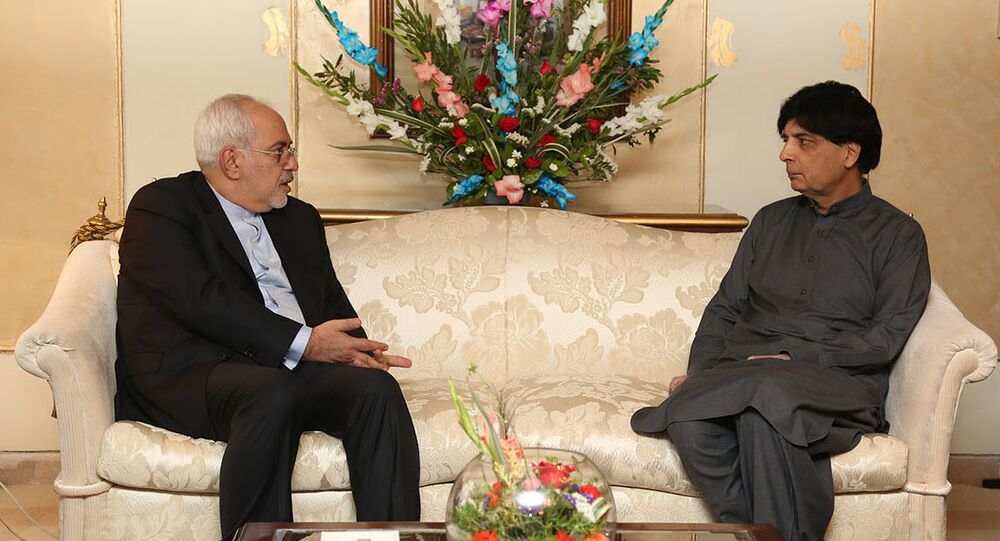 Following a recent terrorist attack on Iranian border guards, Tehran has warned neighboring Pakistan that it will carry out anti-terrorist operations in Pakistan if Islamabad doesn't stop its territory from being used by terrorists.

On April 26, ten guards were murdered and three injured in the border town of Mirjaveh, in Iran's southeastern Sistan and Baluchestan Province.

The terrorists who carried out the attack fled into the territory of Pakistan, and the Pakistani authorities are yet to bring them to justice.

Chief of Staff for the Armed Forces of the Islamic Republic of Iran, Mohammad Hossein Bagheri, has threatened military action on Pakistani territory, unless the authorities take action to apprehend terrorists operating there.

"Unfortunately, the Pakistani border area has turned into a refuge and training ground for terrorists hired by Saudi Arabia, with the approval of the United States."

"The situation that exists at our joint border is completely unacceptable to us. We expect the Pakistani authorities to take control of the border, arrest and extradite terrorists, and destroy their bases. If the attacks [from Pakistani territory] continue, terrorist hideaways and camps will be subjected to devastating strikes, wherever they may be," Bagheri said.

Iran has enjoyed a good relationship with its southeastern neighbor for decades, but the intervention of neighboring Saudi Arabia has upset bilateral relations, Emad Abshenass, editor-in-chief of Iran Press, told Sputnik.

"From the establishment of the Islamic Republic of Pakistan to this day, Iran has had sincere and friendly relations with its south-eastern neighbor. Unfortunately, a third party has had a hand in this latest incident – Saudi Arabia."

"Aiming to drive a wedge between our countries, Riyadh has financed political and military structures in Islamabad with the aim of creating camps for terrorists in Pakistan, which can at any time be directed to the eastern borders of Iran with an extremist 'mission.' Their ultimate goal is to penetrate deep into Iran and undermine the country's security system," Abshenass declared.

"Of course, Iranians are concerned about this problem and expect the Pakistani authorities to nevertheless take control of their side of the border. It is noteworthy that terrorists have training grounds right in Pakistani territory [but] at the same time, the Pakistani army has the potential to eliminate all these camps and terrorist bases. According to the spirit of international law, the government of Pakistan should not allow extremists to have training grounds, military bases and secret shelters on its territory from which neighboring states can be attacked."

© AFP 2021 / ATTA KENARE
Iran Ramps Up Oil Exports to South Korea, Much to Trump's Chagrin
If Iran suffers another terrorist attack from Pakistani territory, then it will be forced to retaliate with military force, the journalist warned.

"According to all international norms and laws, in the case of another terrorist attack Iran has the right to take measures, particularly since Pakistan has been given all the relevant warnings. In addition, there are certain bilateral agreements that give Iran the right to take action in order to ensure security – to cross the border and pursue terrorists until they are defeated. In addition, Iran has the right to destroy all the known camps and hideaways of these terrorists."

Iran has been forced to take similar action in the past at its border with Iraq, Abshenass said.

"When Daesh terrorists took the Iraqi city of Mosul, they didn't head to Baghdad but to Erbil, so they could get closer to the Iranian border. However, soldiers and volunteers from our country repelled them. If they hadn't, terrorists might be in our country already. In this and similar cases, the Islamic Republic [of Iran] is simply adhering to the principle of preserving national security."

"Today, Iran has given political and military warnings to its neighbors, and these warnings should in no way be regarded as a threat of aggression or military attack by Iran against its neighbor. However, if this neighbor is not able to ensure security in the region and eliminate the threats that exist, in this case Iran will simply have to guarantee security itself," Abshenass said.

Explosion in Pakistan Kills at Least 20, Injures Over 30