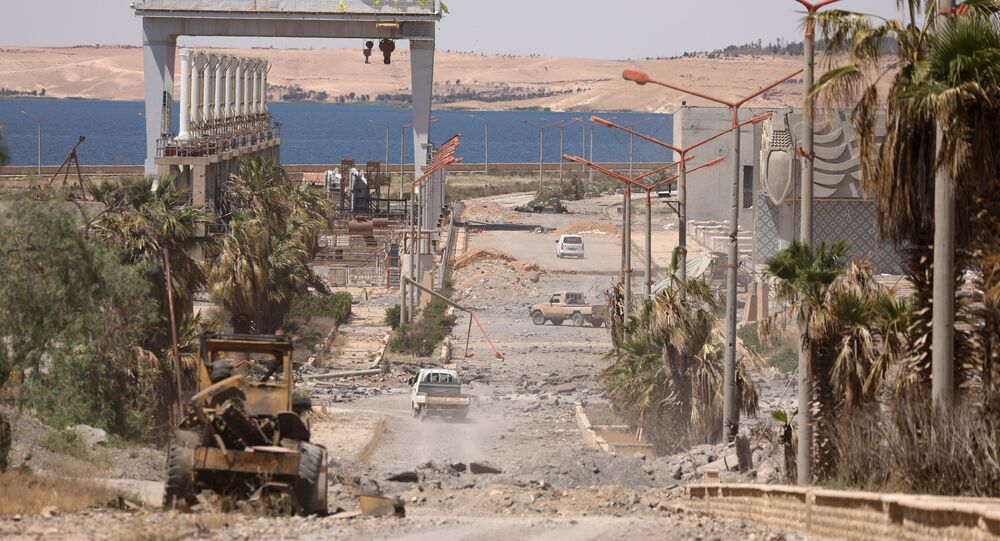 Recent reports suggest that the US-Backed Syrian Democratic Forces (SDF) and the Kurdish People’s Protection Units or YPG are bracing for what could be one of the defining battles of the war against Daesh terrorists, awaiting more weapons from the US. Turkish diplomat Faruk Logoglu however warned of certain dangers of arming the Kurds.

The US-Backed SDF and the Kurdish Units or YPG are getting ready to embark on an assault on Raqqa, the stronghold of Daesh terrorists, in early summer, Reuters reported, citing  Abdul Qader Hevdeli, an SDF commander.

He said that they are awaiting more weapons from the US, including armored vehicles, to be able embark on what can be one of the defining battles of the war against the militants in Iraq and Syria.

© REUTERS / Rodi Said
Syrian Democratic Forces (SDF) fighters stand in the town of Tabqa, after capturing it from Islamic State militants this week, Syria May 12, 2017

This week President Trump has authorized supplying weapons for the first time to the SDF’s most powerful element, the Kurdish YPG, to help in the Raqqa assault.

That has infuriated Turkey, which sees the YPG as an extension of the Kurdistan Workers' Party (PKK) outlawed in Turkey. The US' move sparked even more debates as Turkish President Erdogan is set to visit Washington next week.

Meanwhile, when asked about the timing of an assault on Daesh's de facto capital in Syria, Hevdeli told reporters at a news conference in the city of Tabqa that he "can't specify exactly, but believes entering and storming the city will happen at the start of the summer."

© AP Photo / Arab 24 network
US Arms Supplies to Kurds a 'Diplomatic Slap in the Face of Turkey'
"At the start of entering, of course, as (the US-led coalition) promised us, there will be support in the form of specialized weapons, armored vehicles or others."

He said that weapons approved by the White House for the YPG had yet to arrive, but added: "I believe these weapons or this support will arrive soon."

This week the SDF and YPG have captured the city of Tabqa, along with its nearby dam on the Euphrates River, located 40 kilometers upstream from the city of Raqqa.

The SDF said in a statement that Tabqa would be turned over to a civilian council once fully secured. The authority that oversees the hydroelectric Tabqa dam would remain "a national Syrian institution that will serve all the regions of Syria without exception".

The SDF have also captured a major airbase near Tabqa, some 50 km (30 miles) west of Raqqa, in the latest phase of their operation against Daesh.

© AP Photo / Hawar News Agency
Message to Turkey: What is Behind US' Decision to Supply Arms to Kurds
However a source in the SDF has told Sputnik Turkiye that the Kurds received the first batch of US armaments and armored vehicles on Friday.

"After US President Trump approved the supply of weapons to Kurdish forces fighting the Islamic State (Daesh) in Syria, we received the US armaments and armored vehicles. We have received many Hummer vehicles, mine throwers, infrared homing missiles, heavy machineguns, armored vehicles and tanks," the source, who preferred not to reveal his name, told Sputnik.

The armament and armed vehicles, he said, were sent by land from the Iraqi Kurdistan and then sent to Rojava autonomous region in northern Syria, he said. It was further sent to Kobani, a city in the Aleppo Governorate and the Tell Abyad District within the Raqqa Governorate.

Russian military analyst, editor-in-chief of the Russian magazine "Arsenal of the Fatherland" Viktor Murakhovsky said that the liberation of Raqqa and the city of Deir ez-Zor, which is also currently in the midst of heavy fighting, will mean the loss of control by Daesh over any important infrastructure in the territory of Syria.

In his interview with Russia's online newspaper Gazeta.ru, he said that the valley of the Euphrates River (including Tabqa, Raqqa and Deir ez-Zor) now serves as the major resource base for Daesh. Besides the dam, there are many industrial enterprises and other objects of infrastructure.

"The dam is only one of the key objects in the region. The whole area is a very important resource base for Syria, thus it is very important to kick the militants out. It will be better for everyone, and it does not matter whether the Syrian government is cooperating with SDF or not," he told the outlet.

© AP Photo / APTV
US' Variant of Russia's Hmeymim? What Washington Has in Mind for Syria
However former Turkish Ambassador to the US Faruk Logoglu has warned of certain dangers of arming the Kurds in Syria.

"The US decision to arm the Kurdish units in Syria is dangerous both for Turkey and for Syria. The US has been governed by its short-term ambitions. It might allow them launching an operation to liberate Raqqa, however in the long-term perspective it will result in the breakup of the territorial integrity and unity of the Syrian state and more clashes on its territory. The assault on Raqqa is an important milestone in the Syrian conflict, however Syria's ultimate future is of more importance," he told Sputnik Turkiye.

"The Americans got stuck on the elimination of Daesh, however Daesh is not the only Syrian problem," he said.

By arming the Kurds, Faruk Logoglu said, the US is supporting their claims for an independent Kurdish state. And this will facilitate the continuation of the conflict in Syria.