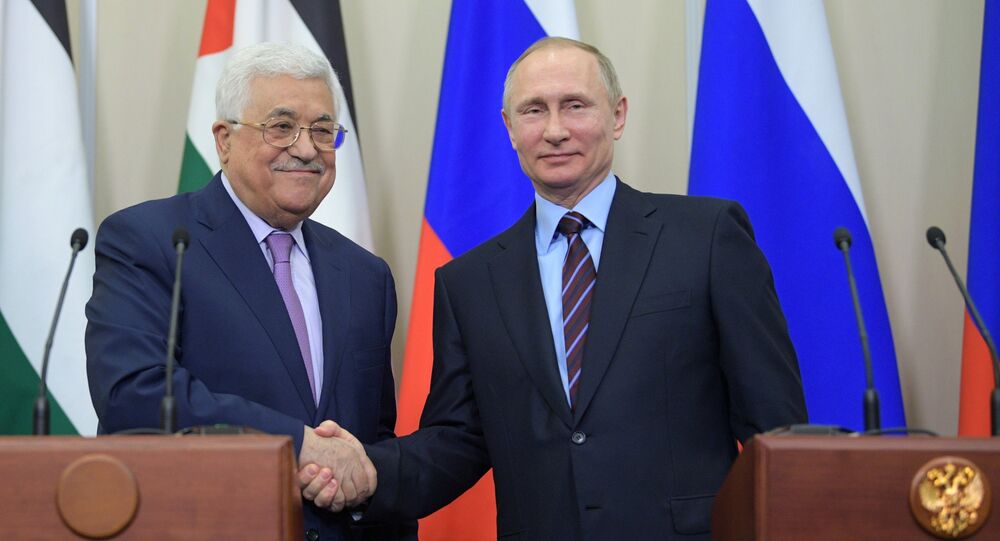 The Palestinian-Israeli conflict "has only a political, negotiated solution based on international law," Vladimir Putin said.

SOCHI (Sputnik) — The peaceful coexistence of Palestine and Israel is a guarantee for security and stability in the Middle East, Russian President Vladimir Putin said Thursday.

"I emphasize that the peaceful coexistence of the two states, Palestine and Israel, is an indispensable condition for ensuring the level of security and stability in this region," Putin told reporters after talks with Palestinian Authority President Mahmoud Abbas in the Russian Black Sea resort of Sochi.

Russia and Palestine are continuing their efforts to tackle the Palestine-Israeli conflict, Putin said, adding that relations with Palestine are particularly important for his nation.

"Out relations with Palestine are special and of particular significance for us… We have been working for years on one of the key problems of today’s world, namely, resolving the Middle Eastern problem," the Russian president said.

Putin noted that the bilateral ties between the two states had deep, historic roots, and stressed the reliable and warm nature of the relations in the recent history.

"I want to express my gratitude for the attention that you give to the Russian-Palestinian relations, for the support of our citizens who live in Palestine and who arrive as pilgrims to holy places," Putin added.

"Russia, including as a member of the Middle East Quartet, along with the United Nations, the United States and the European Union, will continue to provide comprehensive support to the resumption of direct dialogue between the Palestinians and the Israelis," Putin told reporters.

Putin described his talks with Palestinian Authority President Mahmoud Abbas on Thursday as substantial and constructive.

"We had substantial and constructive talks, which are always frank and conducted in atmosphere of mutual trust. We talked about bilateral relations and the Middle East settlement, on urgent issues and problems in the region," Putin said at a news conference following the talks.

According to Putin, the Palestinian-Israeli conflict "has only a political, negotiated solution based on international law."

"Therefore, it is important for them to maintain bilateral relations, to refrain from unilateral steps, jointly seek mutually beneficial solutions, and jointly fight terrorism," Putin said.

Abbas, on his part, said that he had informed Putin of the situation in Palestine in the wake of the "ongoing Israeli occupation," as well as about thousands of Palestinian prisoners in Israel.

"All these things undermine chances for peace in our region and undermine the very idea of the two-state solution," Abbas said.

© Photo : Pixabay
Russia Reconstructing Star Street in Bethlehem, Leading to Jesus' Birth Place
Palestinians seek diplomatic recognition for their independent state on the territories of the West Bank, including East Jerusalem, which is partially occupied by Israel, and the Gaza Strip. Israel has been building settlements on the occupied territories despite objections from the United Nations.