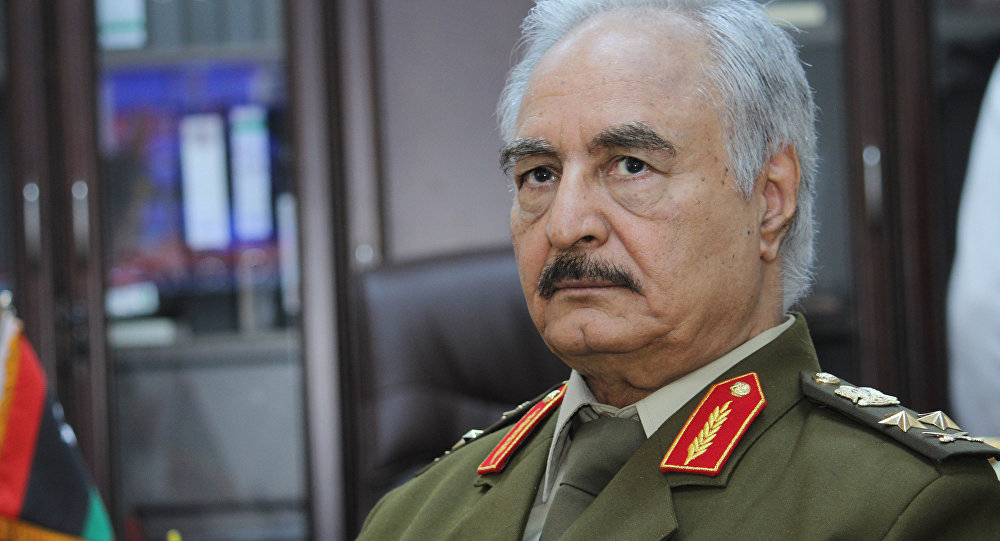 Libya's Foreign Minister Mohammed Siyala, has named Khalifa Haftar, the long-time opponent of the UN-backed Government of National Accord (GNA) and the chief of the self-styled Libyan National Army (LNA), as the head of the country's military on the condition that he recognize the UN-backed GNA as the sole governing authority.

Field Marshall Haftar, whose LNA took control of a number of Libya's key oil ports in the country's east back in September, is a popular figure. However he has always rejected the legitimacy of the UN-backed GNA which was established as the "sole legitimate executive authority in Libya."

The success of Haftar and his LNA in taking the oil crescents out of the control of a GNA-backed rebel group, and his success in repelling Islamist groups from parts of the east of Libya, have contributed to his widespread popularity. This however, dealt a serious blow to the legitimacy of the GNA in the same region, including in Libya's second city, Benghazi.

© AP Photo / Mohammed El-Sheikhy
In this March 18, 2015 file photo, Gen. Khalifa Haftar speaks during an interview with The Associated Press in al-Marj, Libya.

In an unprecedented move at a press conference in the Algerian capital of Algiers on Monday, May 8, Mohammed Siyala, who is an official in the GNA, referred to Haftar as the "commander-in-chief of the Libyan army." Later on, Siyala attached the disclaimer that Haftar must first recognize the Tripoli-based GNA as Libya's "sole authority."

The UN-brokered deal of 2015 gave no political role to Haftar and his LNA forces, but the GNA and its international backers have had little choice but to recognize the authority Haftar commands, as he has slowly but surely become a force to be reckoned with on the Libyan political scene.

The Algiers conference was attended by a number of influential characters from the region, including Abdelkader Massahel, Algeria's Minister of Maghreb (North West Africa) Affairs, African Union and Arab league members, and UN envoy to Libya, Martin Kobler.

The announcement comes on the heels of a meeting early May, that took place in the United Arab Emirates, between the GNA's head, Fayez al-Sarraj and Haftar. The meeting was spearheaded in the hope of ending Libya's political deadlock by bringing both sides together to forge a power-sharing agreement.

The international community, including Russia and Egypt, have been pushing for months for Serraj and Haftar to sit down at the negotiating table to discuss hashing out the main issues with the UN-mediated agreement.

Grateful to Minister Messahel for hosting this important meeting of Libya's neighbours in #Algiers 1/2 pic.twitter.com/jBkOPuBCPv

After the meeting in the UAE, both leaders made a joint statement that Libya must reach a political resolution. Serraj also added that they had agreed to "form a unified Libyan army."

Libya has been tormented by chaos since the 2011 ouster of former leader Muammar Gaddafi, with rival militias and political factions engaging in fratricidal war for the oil-rich country.

Trump Says He Does Not See Role for US in Libya