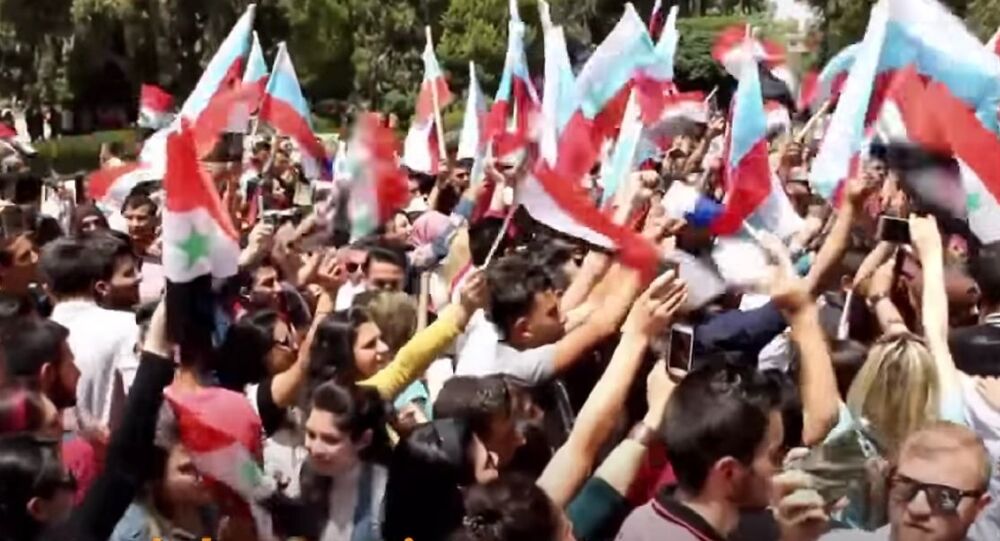 Syrians gathered to celebrate Russian Victory Day at the University al-Baath in Homs on Tuesday, May 9.

Russian Officer Sergei Drogin addressed the crowd, reiterating the idea behind the Victory Day in Russia.

"For us who live now the most important is not to forget our fallen heroes," Drogin said. "I believe in our victory over international terrorism. I believe that soon Syria will become again the blooming and peaceful country."

The celebration was one of the hundreds of commemorative events around Russia and the rest of the world celebrating the anniversary of the official capitulation of Nazi Germany at the end of World War II.

© REUTERS / Maxim Shemetov
From Red Square to Airbase in Syria: Russia Celebrates WWII Victory Day
25
A parade commemorating the victory in the Great Patriotic War was held at the Hmeymim airbase in Syria's Latakia province for the first time last year. On May 9 this year, Russian servicemen held the parade again, carrying on the tradition. During the parade, Syrian President Assad's welcoming address was read by Chief of the Syrian Army General Staff Lt. Gen. Ali Abdullah Ayyoub.

On May 9, Russia celebrates the victory over Nazi Germany in the Great Patriotic War and the end of WWII in Europe. Russia's celebrations on May 9 start with military parades across the country with the most famous taking place on the Red Square in Moscow and concludes with fireworks in the evening.

About 100,000 People Took Part in Commemorative Events on Victory Day in Riga