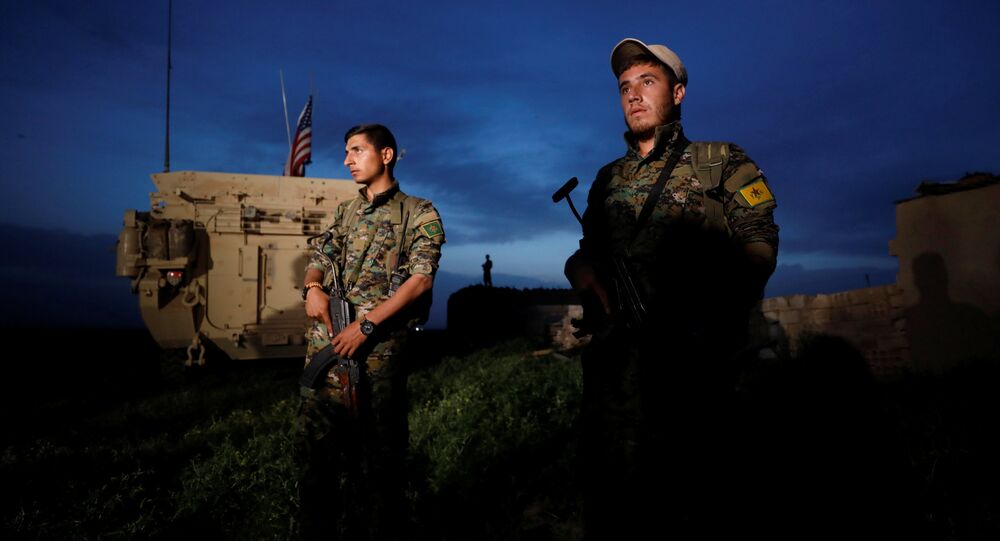 Despite repeated warnings from its Turkish NATO ally, Washington has given the go-ahead to supplying arms to the Kurdish YPG fighters in their operation to retake the Syrian city of Raqqa from Daesh.

The Pentagon has rushed to furnish the policy with statements of its importance to defeating the jihadi group. Pentagon spokeswoman Dana White is reported as saying that, "we are keenly aware of the security concerns of our coalition partner Turkey. We want to reassure the people and government of Turkey that the US is committed to preventing additional security risks and protecting our NATO ally."

"This increase in US support to the Kurdish-led forces would significantly help the fighting against the Islamic State [Daesh] in northeastern and eastern Syria. We know that Raqqa, one of the most important strongholds of the Islamic State, is surrounded on three of four sides of the city. We also know that the YPG have succeeded also thanks to US and Russian support in cutting off the main supply road from Raqqa. So I think the increased support to the Kurds will help in a significant way the advancement of their forces against the Islamic State," Dr. Lorenzo Trombetta, a Beirut-based journalist and scholar told Sputnik.

It has been US policy in Syria to arm the Kurdish YPG since the second term of the Obama administration. The Kurdish group is often cited by the Washington consensus as being the most effective and battle-tested force on the ground against Daesh.

However, the relationship between Washington and the Kurds more generally goes further back than Obama's decision to provide support to the YPG. The administration of President Bill Clinton sought to destabilize the Iraqi government of Saddam Hussein thought the 1990s, and saw the provision of weapons to the Kurdish factions in the North of the country as a means to achieving this.

In Syria however, the situation is far more complex. While the YPG, and the umbrella organization of which it is a part, the so-called Syrian Democratic Forces, are locked in combat with Daesh and other messianic jihadi groups, the YPG has a much more organized enemy on its hands: NATO member Turkey.

Turkey has long opposed the the provision of military largesse to the Syrian Kurdish groups, mainly out of concern that this will embolden the Kurdistan Worker's Party (PKK). The PKK is a Kurdish separatist group mainly concentrated in southeastern Turkey that has intermittently waged guerrilla war against the Turkish state since the late 1970s. Turkey also argues that there is a direct link between the YPG and the PKK, an allegation that Washington has repeatedly played down.

In a sign that it was becoming increasingly paranoid about the consolidation of YPG forces near its border, Turkish warplanes carried out airstrikes against positions in northeastern Syria and in Iraq's Sinjar region last month, reportedly killing upward of 30 YPG fighters.

© REUTERS / Rodi Said
US military commander (R) walks with a commander (C) from the Kurdish People's Protection Units (YPG) as they inspect the damage at YPG headquarters after it was hit by Turkish airstrikes in Mount Karachok near Malikiya, Syria April 25, 2017.

At the tail-end of February 2017, Turkish Prime Minister Ahmet Davutoglu said of the US's support for Kurds that, "the only thing we expect from our US ally is to support Turkey with no ifs or buts," and earlier in March, President Erdogan's government ruled out compromise with the Trump administration over its support for Kurdish fighters. In other words, Turkey had made implicit threats that it does not want to see Kurds involved in the fight for Raqqa and that if they are, US-Turkey relations could wither. However, Trump made his intentions clear early on that the US has every intention of supporting "local groups." While the Kurds are by no means the only local group, they have certainly been a reliable US favorite.

President Trump's announcement on Tuesday, May 9, to approve arms supplies to the YPG was met with celebration by Syrian Kurdish officials. One is quoted as saying that it "legitimizes" the YPG as it prepares to storm the Syrian Daesh stronghold of Raqqa.

When asked how the move might effect US-Turkish relations, Professor Trombetta told Sputnik:

"I think that after Turkey has become a clear ally of Russia and we have seen the outcome of the Astana agreement where Russia succeeded in bringing Turkey to the same negotiating table as Iran, Turkey lost some coverage with the United States, namely regarding the Kurdish issue. Ankara cannot impose its interests on Washington in Northern Syria, it could negotiate some new positions, like the US did together with Moscow when they offered Turkey buffer zones along the only Arab dominated areas of the Turkish border. But I think Ankara should be satisfied enough with what it gained here."

Voices of Kurdish joy were however, made against a backdrop of Turkish condemnation. Turkey's deputy Prime minister Nurettin Canikli called Trump's decision "unacceptable." Mr. Canikli said in reference to the PKK that, "the Trump administration providing arms to a terrorist organisation — either directly or indirectly through the YPG — does not change the fact that this amounts to support for a terrorist organization."

A US official had allegedly said, speaking on condition of anonymity, that the equipment being sent to the YPG and Syrian Democratic Forces could include machine guns, armored vehicles and small arms.

Ankara has long called for Washington to switch its support for the offensive on Raqqa from the Kurdish YPG to Syrian rebels that have been trained and equipped by Turkish forces. However, the Trump administration officials have cast a skeptical eye on the size and capabilities of such forces.

Turkish officials are holding predatory talks with US officials ahead of Turkish president Recep Tayyip Erdogan's planned visit to Washington on May 16-17 to meet with US President Trump. To what extent Erdogan will be able to extract concessions from Trump over US arming of the YPG depends upon how well Erdogan can navigate the diplomatic storm.

The one thing that is for sure for now, is that it appears increasingly unlikely that Trump and the Pentagon will change their minds any time soon over the Syrian Kurds.