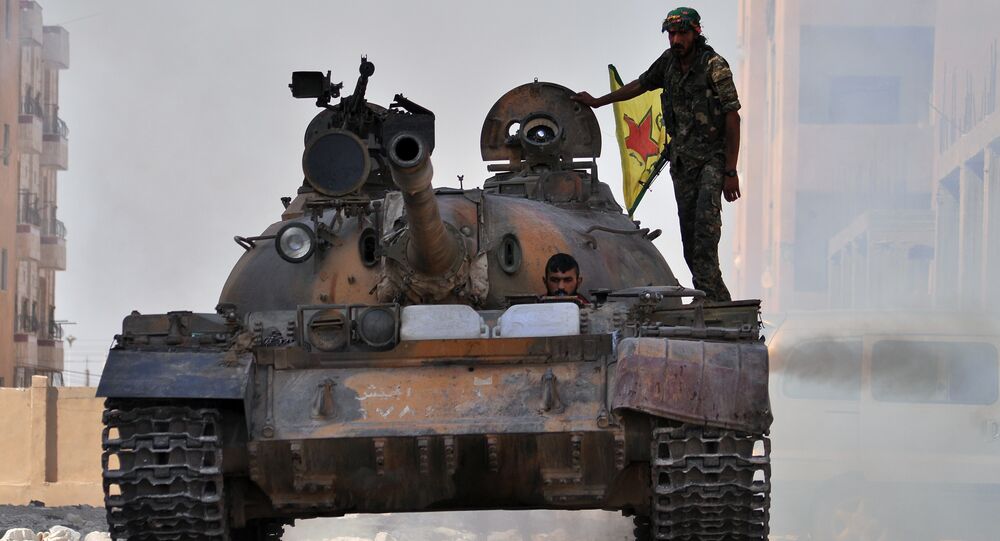 "We demand this. We want to be protected from the threat of aerial operations. We demand guarantees that we would be secure. Our people must be safeguarded against aerial operations. Today Turkey carried out an aerial operation. No one knows what would happen tomorrow. The coalition forces must protect us and the territory we have liberated. The [US-led] coalition must take action," she said.

© AFP 2021 / AMER ALMOHIBANY
US Backing for 'Moderate Opposition' in Syria Remains Obstacle to Peace Process
The YPJ is the female equivalent of the People's Protection Units, with both organizations serving as the armed wing of the Democratic Union Party (PYD), one of the leading Kurdish political forces in Syria.

Ewwas Eli, a senior member of the PYD, shared these sentiments, saying that the Kurds want a security zone to be established in northern Syria.

"We have long made similar requests. We want a no-fly zone along the border [with Turkey]. Let this area be off limits to any planes. This is what our people want. However, no steps have been made in this direction so far. The coalition forces must protect our border. They must not allow airplanes to fly there," he said.

"The coalition forces must give us armaments so that we could protect our people from airstrikes. We request weapons capable of tackling military aircraft," she said.

Nesrin Ebdullah maintained that Ankara's efforts aimed at weakening the Kurds have affected the US-backed Syrian Democratic Forces, sparking a broader crisis in the country plagued by a six-year long war.

© AFP 2021 / Vasily MAXIMOV
Russia, Iran Bear Main Responsibility for Observance of Syria Safe Zones Agreement
On Saturday, the Russian plan aimed at creating de-escalation zones in Syria went into force. However, the four safe areas established under the deal, which was also sponsored by Turkey and Iran, do not appear to cover territories under Kurdish control at the moment. Maps showing exact borders are expected to be ready in a month, but their location has been alredy unveiled.

De-escalation zones are said to cover for large areas, including northern Idlib province and parts of neighboring Aleppo, Hama and Latakia provinces, as well as the northern part of Homs province, Eastern Ghouta and an area in southern Syria near the border with Jordan.