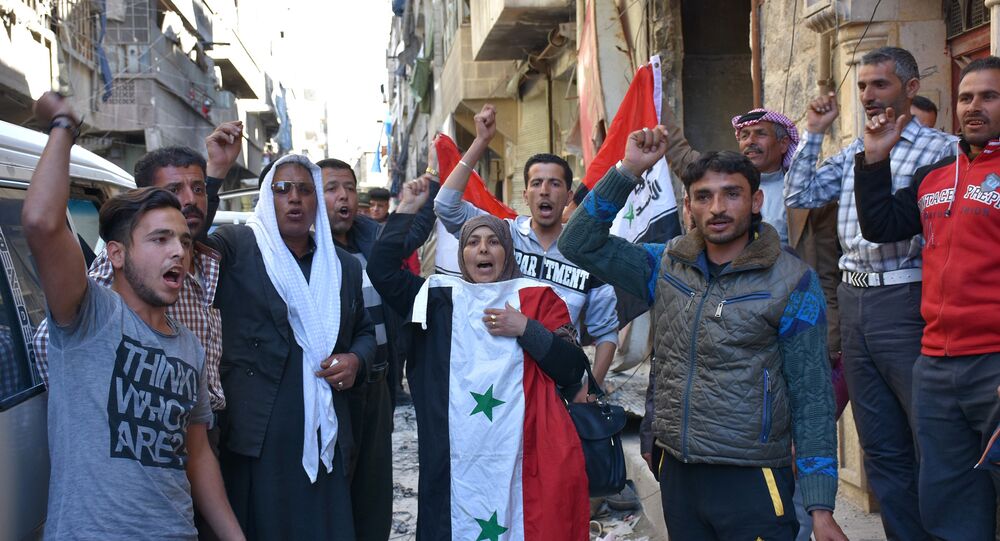 Aleppo is incrementally returning to life as the time of terrorist occupation has been left behind.

ALEPPO (Syria), (Sputnik) — Authorities in the northern Syrian province of Aleppo started a large-scale operation aimed at returning of thousands of refugees to the settlements liberated from the militants' control as well as at restoration of the villages, Hamid Kenno, Aleppo's deputy governor said Saturday.

"Here is a bakery, which has been robbed and partially destroyed by terrorists… It is obvious that this entity is essential for the local residents and we will restore it in the first place. We are also planning to restore the medical facility," Kenno told reporters.

Amazing! The Syrian gov't isn't "barrel bombing" this school in Old #Aleppo but rebuilding it after it was ruined by Al-Qaeda. Imagine that! pic.twitter.com/8SBH5AcnjP

According to the authorities, the plans include relocation of about 12,000 of refugees to their villages located near the Euphrates river.

© Sputnik
First Train Carries Passengers Through Terrorist-Free Aleppo (VIDEO)
Millions of Syrians have been displaced and become refugees since the beginning of the civil war in the Middle Eastern country in 2011.

In recent months, the Syrian Army supported by the Russian Aerospace Forces succeeded to liberate a number of territories in Aleppo occupied by militants, including from Daesh.

© Sputnik / Courtesy of The Russian Center for Reconciliation of Opposing Sides in Syria
A girl is seen here in the temporary refugee shelter in Jibreen, Aleppo.
...
Reddit
Google+
Blogger
Pinterest
StumbleUpon
Telegram
WhatsApp
391

ICRC Praises Russia for Aid in Syria, Evacuation of 35,000 Civilians From Aleppo