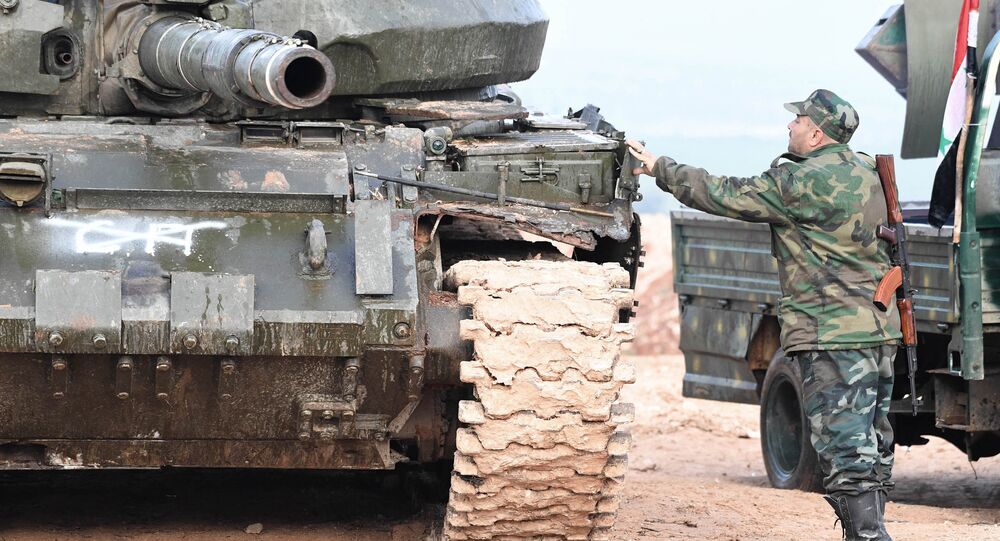 Syrian ceasefire guarantor states Russia, Iran and Turkey have adopted a memorandum on the creation of four safe zones in the war-torn country. Asked for comment, Middle East politics expert Karine Gevorgyan told Sputnik that Russia and its Syrian allies are looking forward to a halt in hostilities, but won't be letting their guard down, either.

Meeting in Astana, Kazakhstan on Thursday, Russian, Iranian and Turkish negotiators adopted a document to set up the safe zones. According to the memorandum, the guarantor states "agreed to create de-escalation zones in Idlib province and parts of the neighboring provinces (Latakia, Hama and Aleppo), certain parts in the north of Homs province, Eastern Ghouta, [and] certain parts of Syria's south (Daraa and Quneitra provinces)."

© REUTERS / Omar Sanadiki
Memorandum Signed: What Are the Safe Zones in Syria?
The memorandum prohibits the use of any weapons in the safe zones, alternatively called 'zones of de-escalation', including airstrikes. A working group of representatives from the guarantor countries will need to complete a mapping of the areas of tensions by May 22.

Damascus welcomed the initiative, saying that it looked forward to discussing the details of its implementation as soon as possible. Russian Foreign Minister Sergei Lavrov, for his part, voiced the hope that the safe zones initiative would "be an important step toward strengthening the ceasefire."

© Sputnik / Ksenia Voronina
Bashar Ja'afari, Permanent Representative of the Syrian Arab Republic to the United Nations, left, at a meeting on Syria in Astana

Turkish President Recep Tayyip Erdogan, who held talks with Russian President Vladimir Putin earlier this week, also praised the initiative, saying that if implemented, it will play a crucial important role in helping to bring Syrian the conflict to an end. The US, for its part, also welcomed the effort.

Amid the Syrian crisis, Turkey and the US have played key roles in supporting anti-government militants, which have been referred to in the Western press as the 'moderate opposition'. Observers say that if Ankara can convince the Syrian opposition forces it supports to comply with the safe zone arrangement, it would play a major role in bringing the crisis closer to resolution.

© REUTERS / Bassam Khabieh
Signs of a Bargain? Why Russia is for the Establishment of 'Safe Zones' in Syria
Moscow has been sure to insist that the armed Syrian opposition must comply with the arrangement for it to work. During the memorandum's signing ceremony on Thursday, several members of the rebel delegation left the negotiating room, shouting in protest. A majority, however, remained in the hall.

For their part, Russian analysts have generally praised the safe zones initiative, but added that Moscow shouldn't get ahead of itself in seeing it as some kind of catch-all solution to the Syrian crisis.

Karine Gevorgyan, a political scientist specializing in Middle East affairs, told Radio Sputnik that by all accounts, the agreement on the safe zones may mark an important turning point in the quest for a Syrian settlement.

"These four zones need to be demilitarized first, and this is not a process that can be completed in one day," the expert said. "But in any case, what we are witnessing is an important turning point – that is, a kind of agreement between the United States and Turkey on the one hand, and Russia, [Iran] and the Syrian government of Bashar Assad on the other," she added.

© AFP 2021 / George OURFALIAN
Members of the Russian Military police stand guard in the northern city of Manbij as Syrians who fled the city of Aleppo due to the fighting prepare to return to their hometown, on April 5, 2017

"There is forward movement, and now the question is how to implement it in practice," Gevorgyan explained. "Foreign Minister Lavrov said that he is hoping for a turning point. We will hope, but at the same time will keep our gunpowder dry, so to speak."

"And considering the means we have to control the airspace over Syria, we do have a certain advantage, a strong position in these agreements," the political scientist emphasized.

© Photo : Russian Defense Ministry
Russian Army in pictures
© Sputnik / Vladimir Sergeev
No Mercy on the Weeds: Russia's Lavrov Vows to 'Finish Off' Daesh
The next step, in Gevorgyan's view, will be to hope that Washington will finally live up to its promises to separate the modern Syrian opposition from the jihadists.

"Our dialogue partners in Astana promised this. But the US somehow slyly evaded questions related, for example, to the Nusra Front terrorists [the al-Qaeda offshoot in Syria]. They recognized the group as a terrorist organization, but we have repeatedly caught them red-handed cooperating with the group in some areas of Syria. Apparently, now the US will have to keep their promises. This process will be quite long. Whether Washington will be able to cope with it remains a big question for me."

In any case, Gevorgyan stressed that whether or not the safe zone agreement actually pans out, "we have at least some agreement, which relieves tensions and expectations of a conflict darn near close to World War Three."

US Appreciates Russian, Turkish Efforts on De-Escalation Zones in Syria

Memorandum Signed: What Are the Safe Zones in Syria?