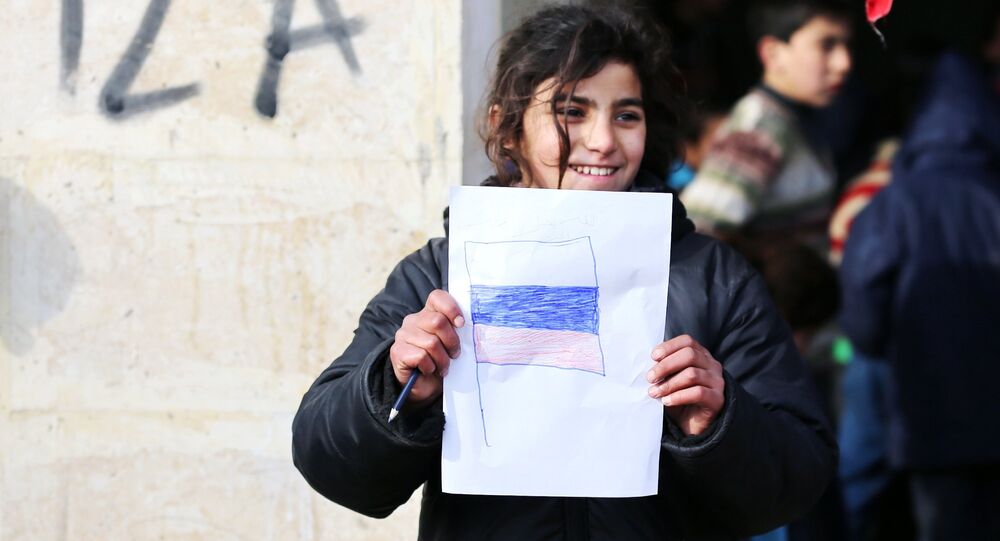 © Photo : Youtube/Sputnik
Tanks Drive Through Moscow Center for Victory Day Parade Rehearsal
Sputnik assesses why the Russian symbol of victory is so dear to Syrians.

This year, for the first time, a St. George's ribbon campaign was launched at Damascus University and within just a half-hour more than one and a half thousand ribbons were distributed to the public.

The ribbons were distributed along with memos, which explain the importance of this symbol in the history of Russia. The memo is still written in Arabic; however, it is possible that very soon it will be written in Russian because the Russian language is actually recognized in Syria as the second main language.

Russian language departments are open in all of the universities across the country. Syrians also begin studying Russian in schools starting from the seventh grade. Such was the decision of President Bashar al-Assad, whose children are also learning to read, write and speak the language.

On the streets of Damascus, one can even meet a Syrian child with a St. George ribbon on his chest, speaking Russian and saying his name is Putin. Do not rush to look around for a hidden camera prank – what he is saying can easily be true.

A Russian symbol of military valor, the Russian language and the naming of Syrian children with Russian names: all of these are signs of “gratitude Syrian people have to Russian people for their support,” the ambassador of Syria to Russia, Riyad Haddad said.

A number of foreign states, such as Israel and Turkey, have also carried out military activities on the territory of Syria in order to achieve own goals.