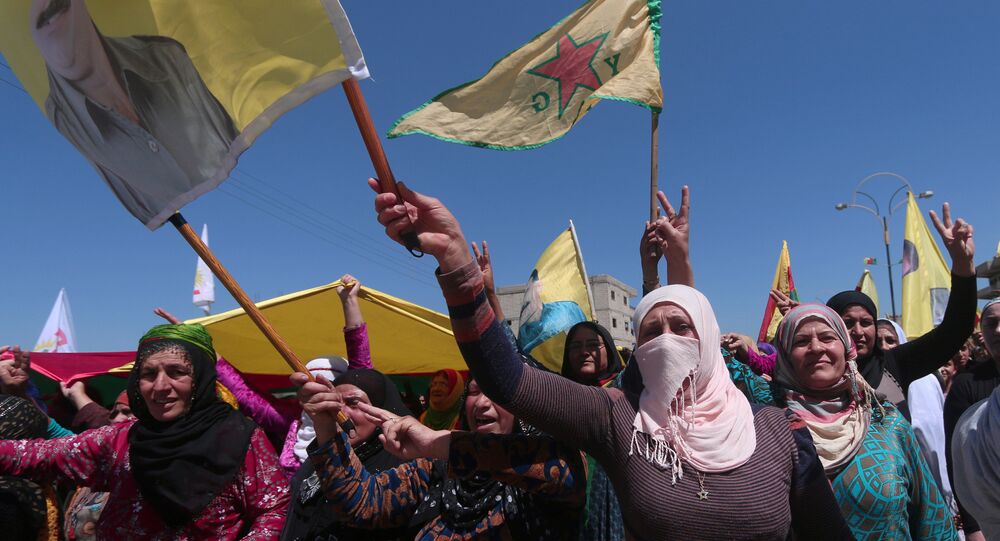 Nesrin Ebdullah, the spokeswoman of the Kurdish People's Protection Units (YPG) and its Women’s Defense Units (YPJ) has sharply criticized the US' vague reaction and the absence of any NATO reaction to Turkish air strikes on Kurdish positions in Syria and Iraq, interpreting it as de facto consent to the bombing.

© REUTERS / Rodi Said
Bloody Message: Turkey's Attacks on Kurds Show It is 'Not Happy' About Kurdish-Russia-US Contacts
On Tuesday, Turkish jets struck the positions of the Kurdish People's Protection Units (YPG), in northern Syria and Iraq, killing about 70 Kurdish fighters.

In Iraq, the Turkish planes bombed Kurdish fighters of the Kurdistan Workers' Party (PKK) in Sinjar region. In Syria, the air strikes targeted the YPG positions in the Karachok Mountains in the northeast of the country. YPG units remain key a component of the Syrian Democratic Forces (SDF), which are backed by the US and which have been closing in on the Daesh stronghold of Raqqa.

Turkey however claimed that the airstrikes were aimed at preventing the Kurdish fighters from sending terrorists and weapons to Turkey.

In Washington, the State Department said it was "deeply concerned" by the air strikes, which were not authorized by the US-led coalition, which Turkey is part of.

Commenting on the reaction of the US, Nesrin Ebdullah told Sputnik Turkiye that such an "ill-defined" reaction is unacceptable from the perspective of international law.

"If the members of the coalition or the representatives of the US State Department express their reaction with the words 'we are deeply concerned' by the Turkish air strikes, we do not accept such a position and condemn it, as we think that it does, in fact, agree to the bombing," she told Sputnik.

© AP Photo / Anatolia, Kenan Gurbuz
Turkey Notified US, Russia 2 Hours Ahead of Airstrikes on Kurds in Syria, Iraq
She said that any repeat attack by Turkey followed by similar vague mumblings from the US will, by definition, prove the US is backing Ankara's aggression towards the Kurds.

Ebdullah also warned that in case the coalition forces do not voice their clear and firm position regarding the Turkish actions, the YPG units might withdraw from Operation Euphrates Wrath to liberate Raqqa from Daesh, which is being currently pursued by the SDF.

"Until now we have been participating in the joint fight with the coalition against our common enemy, Daesh. However our people are waiting for an answer why the coalition forces have not condemned the Turkish strikes. If the NATO coalition does not voice a clear and firm position on it, we will withdraw from the operation in Raqqa and will return to our territories to defend our people," she said.

Turkey, she said, is a NATO member state, and the Alliance has not condemned its actions, it can only mean that the strikes were launched with the approval of NATO.

"If NATO does not provide any reaction to the Turkish strikes, we will consider what our next steps will be," she told Sputnik.

© REUTERS / Rodi Said
Kurdish women carry flags and a banner as they protest, in the northeastern city of Qamishli, against Turkish airstrikes on the headquarters of the Kurdish fighters from the People's Protection Units (YPG) in Mount Karachok on Tuesday, Syria April 26, 2017

Nesrin Ebdullah also suggested that Turkey is operating in the region with the support of the Kurdistan Democratic Party (KDP). Without this support and KDP's assistance Turkey could not have launched its operation in Sinjar, she said.

In a separate comment on the issue, Said Mamuzini, a representative of the KDP told Sputnik Turkiye that Turkey wants to force the PKK out of the Sinjar region.

"Some time ago we made a number of statements with regards to the PKK presence in the region and the need for them to leave the territory of Sinjar. However we were unable to achieve any results on this issue," he told Sputnik.