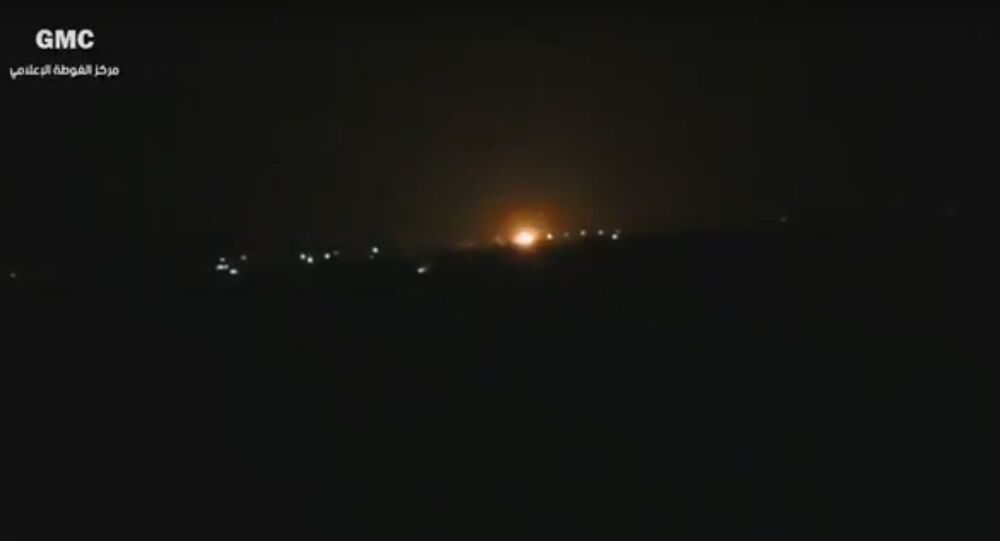 A strike near the Damascus International Airport, which was carried out earlier on Thursday, is compatible with Israel's policy of targeting Lebanese group Hezbollah's Iranian arms supplies streaming through Syria, Israeli Intelligence Minister Yisrael Katz said, without specifying if Israel was responsible for the incident.

TEL AVIV (Sputnik) — Earlier in the day, a large explosion erupted close to the Damascus airport with initial reports claiming that it was a result of an Israeli airstrike against a Hezbollah supply hub.

"The incident in Syria fully fits in with Israel's policies… of countering Iranian attempts at supplying modern weapons to Hezbollah through Syria," Katz told the Army Radio.

Katz recalled Prime Minister Benjamin Netanyahu's promise to continue Israeli efforts to prevent attempts to arm Lebanon-based Hezbollah, which is fighting on the side of the Damascus government forces in Syria.

YouTube/solate4work
Syria Confirms Several Israeli Missiles Hit Military Position Near Damascus Airport at Dawn - State TV
The minister stopped short of saying Israel was responsible for the incident, while the Israel Defense Forces (IDF) press office turned down to comment on the matter.

On March 17, Israeli warplanes attacked targets in Syria. Netanyahu claimed the strikes were aimed at preventing attempts to arm Hezbollah while Damascus said they targeted government troops near Palmyra. Damascus said the Syrian air defense shot down one and damaged another of the four Israeli planes though Tel-Aviv denied the loss of any aircraft.

Hezbollah was established in the 1980s in Lebanon. Israel, as well as some other states, consider Hezbollah a terrorist organization.

US, Israeli Attacks Used to 'Boost Morale of Syrian Terrorists'