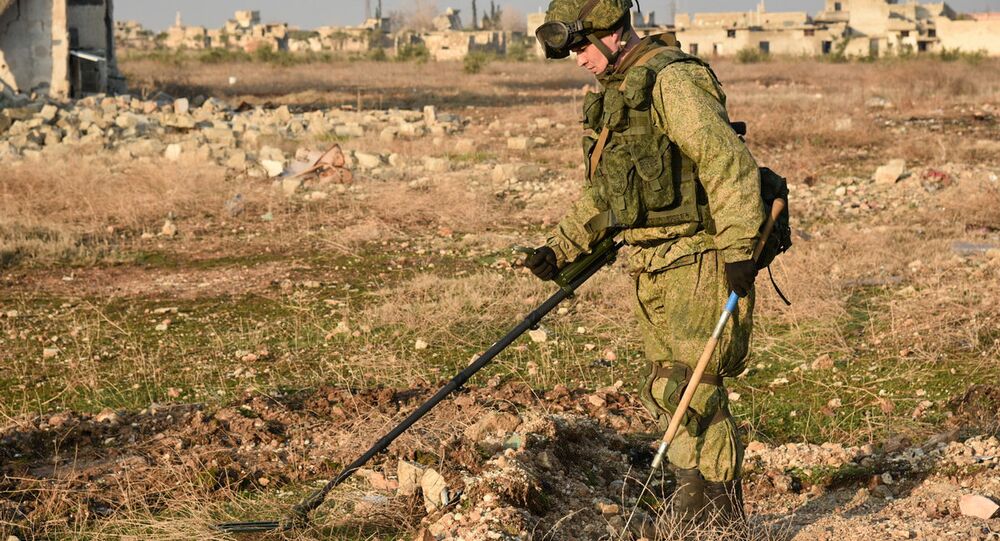 The Russian defense minister called for establishing a global coalition for demining Syria.

MOSCOW (Sputnik) — Russia proposes the creation of an international coalition to take part in mine clearing work in Syria, Defense Minister Sergei Shoigu said at the VI Moscow Conference on International Security on Wednesday.

"I propose to form a coalition of interested countries that could assist in the mine clearance of facilities in Syria," Shoigu said.

He added, "I consider it expedient to create a fund to finance specialized commercial companies that will be involved in similar work."

Russia has been actively engaged in demining Syria. A branch of Russia's International Mine Action Center has opened in Homs. Russian combat engineers demined Palmyra and Aleppo, liberated from militants.

"It is necessary to develop a comprehensive strategy for joint actions in the areas liberated from bandits," Shoigu said.

© Sputnik .
WATCH Aleppo's Famous Street Market Opens for First Time in Two Years (VIDEO)
The Syrian city of Aleppo, which was considered the economic capital of the country before the beginning of the civil war in 2011, had been under militants' control for several years and had been significantly damaged during the conflict. The city was liberated by government forces from militant groups in December 2016, however several militant and extremist groups are still fighting in the province.

Russia, Turkey and Iran were able to move the needle on separating militants belonging to an extremist group formerly known as al-Nusra Front from the constructive opposition in Syria, the Russian defense minister said.

"The joint efforts of the three countries succeeded in breaking the deadlock on the issue of separation on the ground of Jabhat Nusra and the constructive opposition," Shoigu said.

In late December, the UN Security Council unanimously adopted a Russian-Turkish resolution on a ceasefire regime in Syria, as well as on holding political talks between the Syrian government and opposition groups in Astana, Kazakhstan in January 2017. A day earlier, a nationwide ceasefire between Syrian government troops and several opposition factions came into force. Russia and Turkey serve as guarantors of the deal that paves the way for negotiations between the warring parties.