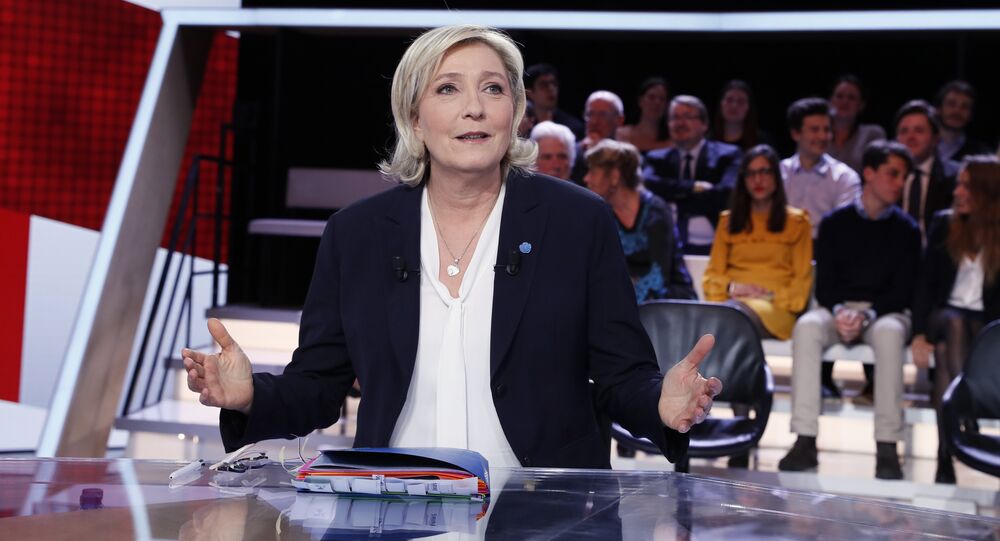 The UN Security Council (UNSC) resolution on the alleged chemical attack in Syria’s Idlib province should not blame any one party without first allowing an official investigation into the incident to be completed, France's far-right presidential hopeful Marine Le Pen said Thursday.

PARIS (Sputnik) — On April 4, dozens of people were reportedly killed in the chemical incident in Idlib. Paris, Washington and London submitted a UNSC draft resolution condemning the alleged attack. Russia vetoed the document on April 12, pointing out that the draft implicated the Syrian authorities as the party to blame for the incident, despite no proper investigation was conducted.

"The resolution has been prepared in such a way that the responsibility was put on [Syrian President] Bashar Assad even before an investigation… It is necessary to hold an international inquiry [into the Idlib incident], and if I were in the UNSC, I would vote for such an investigation, but not for apportioning the blame even before the beginning of the inquiry, because it is the best way to blow the chances to know the truth," Le Pen told the Europe 1 broadcaster.

After vetoing the resolution, Russia's Deputy UN Ambassador Vladimir Safronkov said that Russia's own draft resolution on the alleged attack would request on-site investigations from the Organization for the Prohibition of Chemical Weapons (OPCW) to ensure that "all possible sources and means have been exhausted" before making final conclusions.

© East News / Peter Dejong
OPCW Head Confirms Sarin Presence in Syrian Khan Shaykhun Victims
On Wednesday, Russian Foreign Minister Sergei Lavrov called the chemical weapons incident in the Syrian province of Idlib a provocation as well as an attempt to undermine the ceasefire in the country.

The incident was used as pretext for a US missile strike against the Ash Sha'irat airbase carried out late on April 6. US President Donald Trump characterized the strike as a response to the alleged use of chemical weapons by the Syrian government troops while Lavrov said it was a violation of the international law. Iranian Supreme Leader Ayatollah Ali Khamenei described the US missile strike against the Syrian airfield as a strategic mistake.

Idlib Chemical Incident: No One Asks for Antidotes Within Fortnight