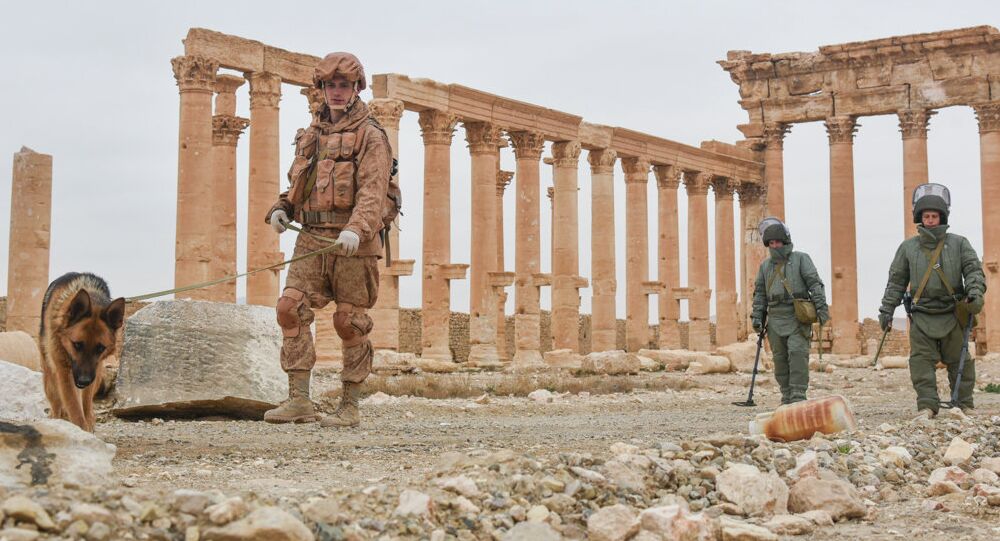 Experts from Syrian ceasefire guarantor countries, namely Russia, Turkey and Iran, who are currently meeting in Tehran, are set to discuss the setup of an international coalition for the demining of Syria. Commenting on the Russia-backed initiative, military analyst Andrei Koshkin said why it is such a great opportunity for any country that joins.

Ministry of defence of the Russian Federation
Russia Urges Creation of International Demining Coalition for Syria
On April 18-19, experts from Russia, Turkey and Iran, the Syrian ceasefire guarantor countries, are meeting in Tehran. They are set to discuss, among others, the creation of an international coalition for demining Syria.

"We would like to draw the attention of the international community and the United Nations to the significant contamination of the territory of Syria by mines, unexploded ordinance, IEDs," Safronkov stated.

"We regularly inform you of the significant activity by Russian experts to deal with these problems. We call on establishing an international coalition for demining Syria.”

© Sputnik / Michael Alaeddin
Moscow Hopes Damascus to Agree on Hosting UN Palmyra Demining Mission
On March 18, the International Mine Action Center of the Armed Forces of Russia announced that Russian specialists had begun demining the historic districts and residential neighborhoods of the Syrian city of Palmyra, a city named on the UNESCO World Heritage List. The operation is expected to be completed within the next month or month and a half.

The document has already been submitted to the Syrian ceasefire guarantor countries and UN representatives during peace talks in Astana on March 14-15. The representatives of Damascus, Turkey and Iran have already contributed suggestions to the document.

The paper suggests working out a roadmap of the deployment of necessary forces and equipment on the territory of Syria in coordination with the Syrian leadership and is aimed, in the first place, at assisting Russia in its demining of Palmyra.

Commenting on Russia's initiative, Andrei Koshkin, a military analyst and head of the Sociology and Political Science Department at the Russian Plekhanov Economic University explained to Radio Sputnik why he thinks the document is of extreme importance.

"We have repeatedly invited the international community to join Russia in its extremely important and life-saving efforts on demining Syrian," he told Sputnik.

"The document, which is being proposed in Tehran, is a very effective project which provides a legal opportunity to all those wishing to join the demining," he added.

© Photo : Ministry of defence of the Russian Federation
Russian engineers conduct mine clearance operation in Palmyra

He further explained why it will be a great opportunity for those countries which get involved.

There is no other place than Syria where the need for demining is so high, he said. It should be done by high-level experts equipped with advanced robotic capabilities. Besides Turkey and Iran, Russia has also appealed to China, Serbia and Japan for assistance. They will receive a unique experience which will be of extreme importance to any country.

"All countries want to equip their engineering troops with advanced technologies and now they will have a chance to test them in action. It sounds cynical, but it is simply a fact that it is better to get experience like this in a foreign country," the military analyst said, noting that there is already a skeleton staff for such a coalition.

Koshkin also commented on the work of Russian sappers in Palmyra, saying that about 150 experts working there use Russia's state-of-the-art robotic demining systems.

"They are doing their best to make the notorious saying that a sapper can only be wrong once become history," he finally stated.