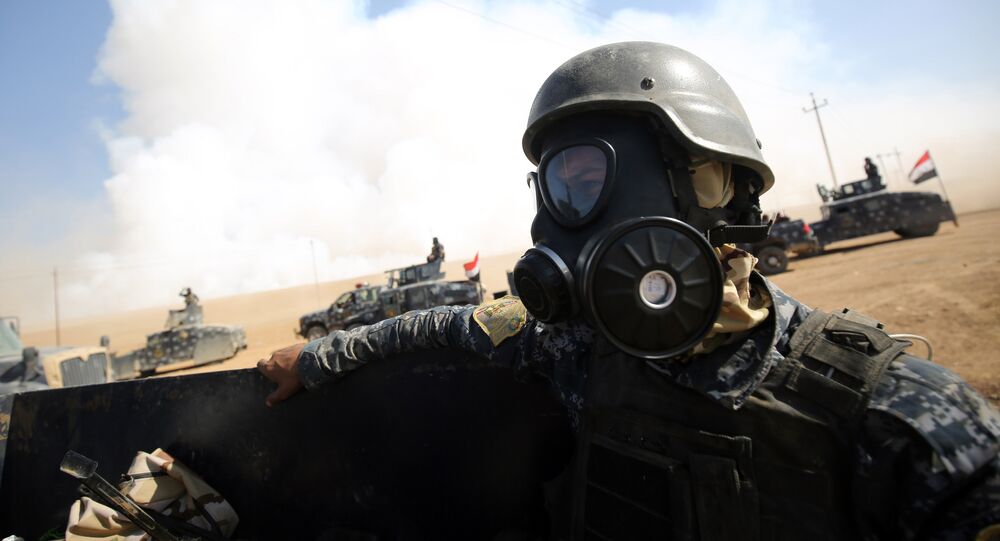 Daesh (ISIL/ISIS) terrorists carried out a mustard gas attack against US and Australian advisers attached to an Iraqi army unit in Mosul over the weekend. Military expert Anton Mardasov says that unfortunately, the jihadists are likely to continue using such dirty guerrilla tactics, and that it will be difficult for US troops to combat this threat.

The terrorist group's suspected mustard agent attack is reported to have left 25 Iraqi soldiers with injuries of varying severity. Brigadier General Yahya Rasool told the Associated Press that six troops suffered breathing problems and were treated in a field clinic.

© AP Photo / U.S. Army photo by Sgt. 1st Class R.W. Lemmons IV
Daesh Uses Mustard Gas Against Iraqi Army Unit With US, Australian Experts
CBS News reported that foreign advisers, including US and Australian troops, had also been hit in the gas attack, but none were injured. The Iraqi army has launched an investigation into the exact type of gas used. Iraqi troops told CBS that gas masks and other protective equipment has been handed out to soldiers to prevent injuries in from further chemical attacks.

This is the second time the terrorists have used chemical weapons this week; on Saturday, it was reported that militants had launched a chemical attack, presumably using chlorine gas, in west Mosul, where the Iraqi army is continuing efforts to liberate the city.

Earlier this month, a municipal leader in the city of Mosul told Sputnik that Daesh had used shells containing poisonous gas against civilians and government troops. Militants were also suspected of using chemical weapons in the city in March.

In January, the Russian Foreign Ministry voiced its concern over the fact that Daesh, the Nusra Front (an al-Qaeda affiliate), and other terrorist groups throughout Iraq and Syria possess and use not only industrial-grade toxic chemicals, such as chlorine, but also pure chemical warfare agents, including mustard gas and sarin.

© AP Photo / Felipe Dana
Iraq Accuses Daesh of Chemical Weapons Attack on Mosul Troops
The danger of chemical weapons in terrorist hands manifested itself in Syria last week. The Syrian General Staff reported that US-led coalition forces had struck a Daesh chemical weapons depot outside Deir ez-Zor, a government-controlled city in eastern Syria which has been besieged by the terrorists since 2015. According to the Syrian government, the chemical weapons leak caused by the strikes killed and injured hundreds, including many civilians. The US-led coalition has denied conducting airstrikes outside the city.

Earlier this month, Syrian rebels reported that a chemical attack in the rebel-held province of Idlib had killed some 80 people and injured 200 more. The rebels accused the Syrian Army of carrying out the attack. Damascus rejected the claims, placing responsibility for the attack on the militants and their foreign sponsors. The Russian Defense Ministry suggested that a Syrian Air Force airstrike may have hit a rebel chemical weapons stockpile. Damascus has said that it may have been a terrorist false flag operation designed to get US sympathy.

Speaking to Radio Sputnik about the deteriorating security situation in the terrorist-controlled areas, particularly surrounding the use of chemical weapons, Anton Mardasov, military expert and head of the Department of Middle East Conflicts at the Institute for Innovative Development, a Moscow-based think tank, warned that Daesh has now shown a willingness to use brutal chemical guerilla warfare tactics, something difficult for the US or any other country's army to prepare for.

"Any armament belonging to any army is not prepared for the use of partisan, guerilla methods of war," the expert said. "The rounds with chlorine gas, for example, can be created in a simple school laboratory. Daesh has cells throughout [Iraq] and across its provinces, and is willing to use these weapons in residential areas, to do so unexpectedly. This is why the struggle against the Daesh phenomenon is so difficult."

© AFP 2021 / AHMAD ABOUD
Damascus: Hundreds Killed in US Strike Against Daesh Depot With Chemical Weapons
In Mardasov's estimation, the terrorists have significant reserves of chemical agents.

"Storage of such weapons is possible in underground tunnels; Daesh has been digging them very actively ever since the caliphate was first proclaimed in Mosul in 2014. The militants didn't waste any time; they made preparations to defend the city, realizing that sooner or later [the Iraqi army] would come to liberate it. At the same time, Daesh's production of chemical weapons in Iraq was established at a local pesticide plant, and at other smaller enterprises."

The Iraqi military's offensive to liberate Mosul, which began in October and backed by Shiite militia, Kurdish Peshmerga forces, and US-led coalition airpower, has become bogged down in the city's western half in recent weeks. As many as 500,000 civilians are feared trapped in the Daesh-controlled western portions of the city, where the terrorists are reported to be using civilians as human shields and shooting them in the back if they attempt to flee.